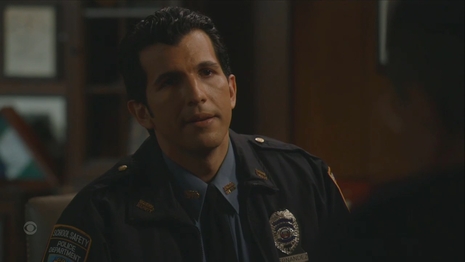 CBS’s Blue Bloods once again touched on the challenges faced by officers in today’s anti-cop culture and delivered a powerful storyline that defended the honor of our heroes in blue.

On Friday’s episode, “Where We Stand,” Police Commissioner Frank Reagan (Tom Selleck) was forced to handle public demands to completely defund the NYPD’s School Safety Division after a fight between an unarmed officer and a criminal student went viral, as teachers and students shouted, “No cops on campus!”

Officer Hernandez (Ryan O’Dell) was merely defending himself after the student, who has a long criminal history and was caught selling drugs again, physically assaulted him. To make matters worse, a school board official demanded an investigation and defended the violent criminal, arguing he needs support and counseling instead of what she called “a beatdown.”

In the beginning of the episode, Lieutenant Sid Gormley (Robert Clohessy) gets a call over the radio about the fight and rushes to the scene:

Dispatcher: 10-13, school safety officer fighting with a student at HS 389.

Sid: You all right?

Sid: What the hell happened?

Roland: Yeah, and you ain't no real cop! You don't even got a gun!

Sid: Hey! Hey! Come back here. You're under arrest.

Students: No cops on campus!

Sid: What the hell are they saying?

Officer Miller: "No cops on campus."

Sid: That's what passes for school spirit these days?

The incident gets brought to Frank’s attention by the school board’s deputy chancellor Jeanine Hoffman (Jill Abramovitz). When Frank asks if the meeting was her idea or the chancellor’s, tensions begin to rise as it becomes clear that Jeanine is very anti-cop:

Jeanine: Well, ours, in that we had a plan in place that I would reach out to you immediately when and if another incident occurred.

Garrett: Though we all hope it doesn't.

Garrett: I think we're all on the same side here.

Frank: We should be. And reach out for what? To ask me to pull my cops out of your schools?

Jeanine: To work with us.

Garrett: Which is what we're trying to do.

Frank: Yes. We're trying to get the knives and guns out of your schools, so your teachers can teach.

Frank: Or maybe it's just that simple.

Frank: Good, let's have him.

Garrett: Good to have an eyewitness. Lieutenant Gormley, Board of Education Deputy Chancellor Hoffman.

Garrett: You for or against us?

Garrett: Me, too, but I just come from one of your schools that was like the yard at Rikers.

Jeanine: Well, you treat schools like prisons, that's what they become.

Frank: Tell us what you saw, Lieutenant.

Sid: A chronic felon passing as a student going after a cop being taunted by an angry crowd.

Frank: A crowd of?

Sid: Students and some teachers.

Jeanine: As one of your agents pummeled a 16-year-old.

Jeanine: That 16-year-old needs support and counseling, not a beatdown. And you're the cop who roughed him up?

Sid: That's because he went after Fernandez again with the whole damn playground cheering him on!

Garrett: Perhaps this is a good time to pin this conversation.

Frank: Of course, there will be a full investigation of this incident.

Jeanine: By the NYPD.

Frank: Yes, but we are welcoming the findings of the Board of Education's investigation, as well.

Jeanine: Well, I will take it to the chancellor.

Of course Jeanine is more sympathetic to the criminal than the one trying to keep students and teachers safe. It’s not enough that school safety officers have had their weapons removed, thus leaving them more vulnerable when attacked, as well as not being able to protect students and teachers should a mass shooting happen. But they’re also now expected to do nothing to defend themselves when they’re physically assaulted.

Frank later meets with Officer Hernandez who expresses that the unrealistic expectations put on him make it “a losing battle.” As always, Frank shows his officer the respect, support, and encouragement he deserves, even in the face of being forced to reassign him:

Frank: Let's have him. Have a seat. Well?

Fernandez: Well, I didn't have a choice. He came after me, so I had to defend myself.

Frank: Which would be your right and your duty.

Fernandez: And this, this is a hardcore criminal. I don't care what age he is.

Fernandez: Yeah. But this kid shows up, he wants to deal drugs and pick fights.

Frank: So, you step in with all the tools you were trained to use.

Fernandez: Right. Which I did, but that's a losing battle. I didn't, I didn't mean it like that.

Frank: Yeah, you did. And the thing is...School safety agents aren't just cops. They got to be diplomats.

Frank: I know you do. Officer Fernandez, I want to thank you for the job you've done under very difficult circumstances. A copy of this letter of commendation will be placed in your file. Well done.

Fernandez: Thank you, sir. I mean, what do they want us to be? Just, uh, friendly little crossing guards, white hats, whistles?

Frank: I don't think they know what they want.

It’s another perfect mic drop moment that Frank is famous for.

He ends the meeting by asking Fernandez, “If we can solve this thing, would you want to go back?”

“In a heartbeat, Sir,” Fernandez answers.

That’s a prime example of the selflessness and bravery that cops display every day.

Frank isn’t finished, however. He ends up crashing a school board meeting and again, boldly speaks truth that the crowd, and our culture, desperately need to hear:

Jeanine: Uh, Commissioner Reagan. What are you doing here?

Jeanine: It's not really the forum.

Frank: Well, my side seems a little short on forums these days. How about I borrow yours?

Jeanine: I'm sorry, uh, something like this would need to be cleared first.

Jeanine: I meant cleared through channels for another time.

Jeanine: I've got to say no.

Man: What do you have to say for yourself? We don't want to see you here!

Crowd: You don't belong here! No cops on campus! Leave our kids alone!

Frank: Thank you. Officer Fernandez, the school safety agent who fought with Roland James the other day, has been reassigned. Please. But there is something about him you should know. This is a list of materials confiscated by this unarmed officer over the last year in your school. Knives, pistols, two semiautomatic rifles, box cutters, fentanyl, barbiturates, methamphetamine. Whatever you don't want around your kids, he got it out of your school. All we're trying to do here is keep your kids safe. That's it. Thanks for your time. They're all yours.

I don’t know about you, but after all the hate from the left towards officers in Hollywood, that scene was so refreshingly awesome, it brought tears to my eyes. Thank God Blue Bloods is there to stand up for our heroes in blue and push back against liberal Hollywood’s anti-cop agenda.

Take a moment to contact the advertisers of this episode and thank them for supporting the truth: Wayfair, Giant, and Febreeze.