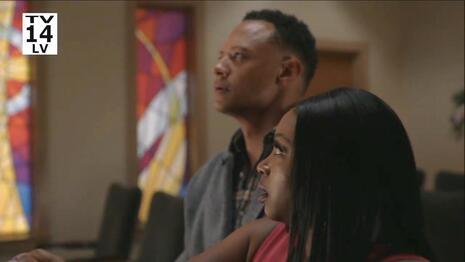 Can’t say we didn’t see this one coming! As we near the day when we celebrate Jesus’s birth, Hollywood is at it again with their typical, anti-Christian storylines. This time it’s in the form of a Catholic deacon turned crazed gunman who attempted to kill members of an R&B girl group, which includes his estranged wife, as part of “God’s plan.”

ABC’s Queens has portrayed Darren (Emerson Brooks) in a bad light from the beginning, while portraying his estranged wife Jill (Naturi Naughton), who left him for another woman, as a “hero” (a label given to her by a closeted priest, as an added bonus.)

On Tuesday’s mid-season finale, “God’s Plan,” Brianna (Eve), a member of the R&B group, is fighting for her life in the hospital after being shot along with the group’s manager. As the episode unfolds, a detective tries to figure out who was responsible for the shooting. There are several key suspects - a con artist who was pretending to be the long-lost mother of one of the women, Jill’s scorned lesbian lover, and a man who the manager owed a significant amount of money to, all of whom had made threats.

But as Jill prays for Brianna in the hospital chapel, we quickly discover it was none of those suspects. It was Jill’s deacon husband Darren, who ends up being completely deranged, talking about “God’s plan” as he tries to strangle his wife to death. Because of course:

Darren: I love watching you pray.

Jill: Why are you here?

Darren: I always loved it. So pure. You and I always talked about God's plan for us to have a baby. I believe in it. I believe everything happens for a reason.

Jill: I don't understand what --

Darren: Shh. Accepting God's plan requires faith. Devotion. It gets you through good times and through times where you do bad things.

Darren: I have hope again, Jill. I now know it's God's plan for us to be together. That's the only reason that bullet didn't hit you tonight.

Police: Alright, let's lock it down. You, this way. You two, come with me. Let's go!

Surgeon: She's crashing. I can't get this bleeding under control.

Merry Christmas, deacons, Hollywood style! Nothing hits like a heaping pile of religious bigotry, amirite? Let’s hope Santa leaves nothing but coal for these writers.

Conservatives Fight Back! This episode was sponsored by Target, Kohl's and Samsung. Click each advertiser for their contact information so you can let them know how you feel about this episode.