Freeform Sitcom Justifies Looting, Arson and Riots at BLM Protests: ‘So Be It’ 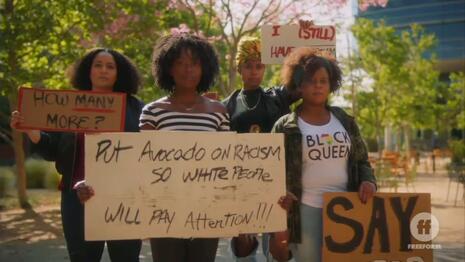 Freeform’s “sitcom” grown-ish aired the second of their two-part BLM-themed episodes on Thursday, and it was just as awful as the first. This time they focused on woke (whack?) terms such as “white fragility,” continued to depict the police as brutal bullies out to hurt black people, and justified and made light of looting, rioting and arson.

Thursday’s episode, “Put Your Hands Where My Eyes Could See,” picks back up in the aftermath of two innocent, young black men separately being murdered by the police, one in cold blood, a situation unlike any championed by BLM. (In fact, Variety pointed out the storyline was inspired by George Floyd and Ahmaud Arbery, even though Arbery wasn’t even killed by police.)

The show’s main characters are on the streets to protest the murders and are soon told that a curfew is in effect and will be enforced by law. Several of the friends decide to go home, but a few agree to defy the law and go further into the city of L.A. because they want to be surrounded by more people.

Back at home, Jazz (Chloe Bailey) is getting text updates from her friends on which businesses are being looted. Nomi (Emily Arlook), who is Jewish, remarks, “burning and looting people’s stores should definitely not be a part of this.”

Even though there’s a push to recognize and support black-owned businesses across the country right now, Jazz and Zoey (Yara Shahidi) defend the looting, arson and rioting, going so far as to say that a family member wouldn’t have a problem with his small business being burnt down:

Nomi: Okay, I’m not so worried about the destruction of property, okay? But, come on. The looting and burning of people's businesses is not gonna help hold racist cops accountable.

Zoey: Of course it's not gonna help hold them accountable, because nothing holds them accountable. That's exactly why this is happening. It's the last resort for people who have just been ignored for too long. Martin even said that riots are the language of the unheard.

Jazz: Okay, Coretta. Looks like Aaron's been serving you the "D" and that knowledge.

Nomi: Alright, look. I obviously understand that human life is more valuable than property. I just -- I don't know. I feel sorry for the small business owners who built their livelihoods from nothing, and now some opportunists are using this man's death as an excuse to destroy that.

Jazz: Okay. My dad built one of those small businesses, but when it comes to saving black lives, best believe Kermit wouldn't mind getting his food truck destroyed. So, if something needs to get burned down or get looted to shake things up, then so be it.

Nomi: I don't know. I'm just baffled. So, you guys are cool, then, with the looting and rioting?

Zoey: Not cool with it, but you choosing to focus on the looting and rioting is a part of a longstanding history of racist thinking.

Nomi: Hold on, Zoey. "Racist thinking?” So, you're calling me a racist? Are you kidding me?

When Nomi continues to express her disbelief over being called racist, Jazz and Zoey try to claim they didn’t call her racist, they just meant she “had some racist thinking.” Nomi reasonably points out, “So, my thinking is racist, which means I think racist things about people based on their skin color, which is literally the definition of being a racist.”

Zoey wokesplains to Nomi, “Again, no…But choosing to criticize the way oppressed people are reacting to their oppression versus criticizing the oppression itself is a part of the problem.” Except that Nomi was doing both. Sooo… ??

Jazz accuses Nomi of “seriously (being) on some white fragility shit,” which leads Nomi to declare that she’s done with the conversation. But, unfortunately for Nomi, that’s a problem, too. “Just so you know,” Jazz declares, “you ‘being done’ with this conversation instead of recognizing your participation in the problem is the exact definition of white fragility.”

Zoey tells Nomi the only reason they’re “calling (her) on this,” is because they love her. Nomi then argues, “If I was with someone who I thought was homophobic or anti-Semitic, I wouldn't be sitting here trying to make them feel better. In fact, I wouldn't be friends with them at all.” The conversation is interrupted when Jazz gets another text update on the looting and quips, “Looks like they’re about to hit the Barnes & Noble at The Grove. Anybody want that new Zane?” Haha?

After Nomi has a phone conversation with her mom to complain about how she’s being treated, her mother tries to reassure her by telling her she was raised not to see color. When Nomi says that not seeing color is “basically saying that you don’t see someone in their entirety, and that's actually pretty problematic.” her mother gets defensive, and Nomi ends up recognizing herself in her mother’s reaction. That’s the moment Nomi sees the woke light and realizes she’s been wrong all along:

Jazz: Looks like they just hit the Brookstone in West Hollywood. How long do you think it's gonna take for us to get there? You know I'm a sucker for modern gadgetry.

Jazz: Well, if you're talking about reparations, you can just Cash App me.

Nomi: Um, you guys were right. I was definitely raised to see the world in a very specific way, and I'll never see the world like you guys do. No matter how liberal my environment or how expanded my world view is, I'll always have some sort of blinders on. And I'm really, really sorry.

Zoey: Well, we appreciate it. And it's all good. You know we love you, but most importantly, thank you for hearing us.

Zoey (voiceover): As the country finally saw its blind spot, we were also forced to take notice of our own. The only thing we could do was move forward with our eyes open in an effort to be better people to those around us and hope that the rest of the country would eventually do the same.

As for the friends who decided to break curfew and join in the city-wide protests where looting, rioting and arson are happening all around them, after being warned the curfew would be enforced by law, they find themselves shocked that…the curfew was enforced by law. Instead of realizing they made a bad decision, they claim innocence and victimhood and put the blame on the police:

Aaron: She was teargassed again.

Luca: Oh, my God. Are you okay? Can you open your eyes?

Luca: What can I do?

Kiela: Nothing. Just give me a minute, please.

Luca: There's got to be something I can do to help. I just want to make sure you're okay.

Kiela: No, I'm not okay. I'm just -- I'm not. This is just all so messed up. How does something like this even happen? You know, I'm here protesting police brutality, and then I get brutalized by the police? It just -- It doesn't make sense. You know, I don't even know what we did wrong.

Luca: It's not your fault. You didn't do anything wrong.

The show ends with Zoey reading the book White Fragility by Robin Diangelo because she didn’t know what it was as Jazz is splayed out on the couch enjoying stolen electronic goods that her friends looted.

They really have a lot of nerve playing cute with such a serious issue, especially when BLM looting led to the murder of a well-respected black man, David Dorn. If they truly want to present “all sides” and believe that black lives matter, why didn’t they create a storyline about Dorn’s tragic murder over a stolen television set? Those looters weren’t frustrated victims who were tired of not being heard, as this episode claimed about looters in general. They were criminal opportunists who cared more about scoring a television set than they did about a black life. To portray looters as victims and make light of looting just goes to show how twisted liberal wokeness really is.

Let’s just hope this is the last of the nonsensical liberal lectures and woke virtue signaling that will be shoved down our throats now that this story arc is over.

Conservatives Fight Back! This episode was sponsored by Subway, Popeyes, and Verizon. Click each advertiser for their contact information so that you can let them know how you feel about this episode!