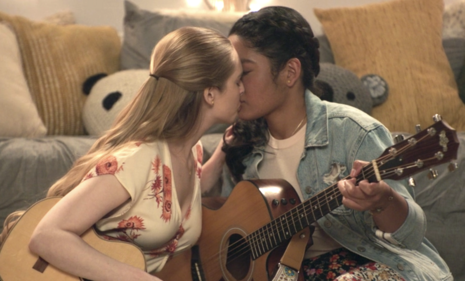 Does the "+" in Disney+ stand for LGBTQ+? If we go by Disney+'s brief history of constantly inserting the LGBTQ agenda into its many shows, the answer would likely be yes. And now the streaming service has featured a lesbian kiss among underage girls (possibly its first) in its “family” sports drama Big Shot that has a target audience as young as age 8. We've sadly come a long way from innocent Mickey Mouse cartoons.

There have been hints of Disney’s agenda in the other “family” shows I watch on their streaming service, such as The Mighty Ducks: Game Changers in which one young character let everyone know he has two moms in almost every episode. But when they actually depict a physical, lesbian kiss between two minor girls for an eight-year-old audience, that’s definitely going too far.

Big Shots stars John Stamos as pro-basketball coach Marvyn Korn who was fired from the big leagues for losing his temper and throwing a chair during a game. He’s then sent to coach a girls’ basketball team at an elite, private high school. Student Carolyn (Tisha Custodio), better known by her nickname Mouse, is the show’s token gay character. Other than a few hints, however, it wasn’t a big part of the overall story until Friday's episode when she professed her love via song to her secret crush, fellow student Harper (Darcy Rose Byrnes).

The episode was named for the song Mouse wrote for her - “Everything to Me.” Mouse’s feelings became evident in a scene where they’re discussing Harper’s desire to win the starring role in the school play over her rival, but Harper's oblivious.

Later, Mouse plays the song she wrote for Harper, making her feelings known to her, which leads to the kiss:

Mouse: ♪ You write with your left hand But you drink with your right hand. You hum opera songs I don't recognize or understand. Monday at lunch, instead of salad... I get French fries ♪

Harper: It's great, Mouse. You're so talented.

Mouse: Thanks, I kind of wrote it to express how I feel.

Harper: So, it's a personal song?

Mouse: Yeah. About you. How I feel about you. Will you help me sing it? ♪ You don't always smile with your eyes. It's not creepy that I notice everything you do. You see, it's just 'cause you are everything to me. When you're bored you tap-dance in your seat. You never slouch and you…

Mouse: ♪ You never let anyone in. Maybe 'cause you think they'll just leave again. It's not creepy that I notice everything you do. You see, it's just 'cause you are everything to me, I'm your biggest fan. I'm entranced by all you do. 'Cause all the stars in the sky don't shine as bright as you.

As mentioned in my previous stories regarding Disney’s insertion of gay sexuality into storylines involving minor children via their ABC Network (as well as a non-Disney show that shares Disney’s LGBTQ+ vision), such depictions are extremely inappropriate for underage viewers. At a time when hormones are raging and confusion over their feelings is very common, sending these messages can only add to such confusion. Girls in particular have been led to believe that innocently wanting to hold hands, snuggle and have sleepovers with their female friends means something sexual when they’re exposed to these sorts of depictions.

Let’s just let kids be kids and leave the political agenda out of it, please.