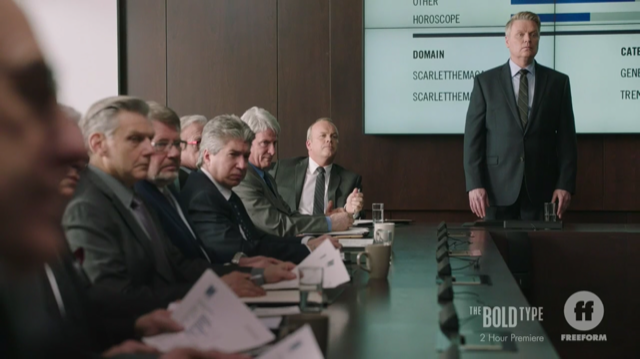 Freeform’s dramedy The Bold Type is (unfortunately) back for another season, and it’s disappointingly more of the same extremely liberal, sex-obsessed storylines. Considering that the show’s target audience is teenagers, it becomes quite disturbing to see storylines such as an argument between two lesbian characters Kat (Aisha Dee) and Adena (Nikohl Boosheri) over Kat being afraid to “go down” on Adena, then an ensuing discussion about lesbian oral sex between the three main female characters Kat, Jane (Katie Stevens) and Sutton (Meghann Fahy) and, finally, the supposedly triumphant conclusion, shown in graphic detail, as Kat overcomes her fears and treats Adena to an obvious orgasm via cunnilingus.

Tuesday’s season 2 premiere consisted of back-to-back episodes, the first “Feminist Army” and the second, “Rose Colored Glasses.” The show follows the lives of Kat, Jane and Sutton as they work in the magazine industry (Kat and Sutton work at Scarlet magazine and Jane left Scarlet in season 1 to explore a new job with Instinct magazine).

In an interview with Vulture, Stevens, who plays Jane, said, “What the viewers love about our show is the relatability. How they feel like they’re seeing themselves and the experiences they’re going through at their age, or assume they’ll go through.” The latter part obviously refers to their teenage viewers, which makes the oral sex scene, as well as many other storylines in the show, even more cringe-worthy.

We also got a taste of bizarre identity politics in the first episode, as Kat schools the old, white men in Scarlet’s boardroom, leaving them clueless and confused by her obvious superior knowledge (#sarcasm), by introducing a story on “Sparkle Pony” who identifies as a unicorn:

Kat: Okay, I'm gonna tweet out links to two different stories, one about Prince Harry and Meghan Markle and the other about this guy: Sparkle Pony, who self-identifies as a unicorn. Which one do you think is gonna get more retweets?

Kat: Nobody else? Okay. All right. Prince Harry and Meghan Markle have... 14 likes and 8 retweets. And Sparkle Pony has 45 likes and 23 retweets. 24... 25. When it comes to the Internet and millennials, it's not about the story. It's about the conversation it starts. That's how we reach the trend-setters of today. 34 retweets... 35, 36—

Jacqueline: All right, Kat. Thank you. You've given us a lot to think about. Moving on...

Kat: You should have seen the look on the board members' faces when I was breaking it down for them. They were like, "What-- what is happening?" Sorry, old guys, it's time to let someone else speak.

In case you were wondering, Sparkle Pony is a real person.

There was also a seminar on sexual harassment for the staff of Scarlet, where an instructor says, “Do not forget. It does not matter what your intention was, it matters how it makes the subject of the intention of the joke feel.”

Huh? I think I need a map for that sentence, please.

Then we go from sexual harassment to sexism, as rumors fly that Sutton gets the best assignments because she once slept with higher-up Alex (Matt Ward) at Scarlet. When Jane asks Sutton what she’s afraid of, Sutton replies, “That even if I become insanely successful, like the next Grace Coddington or something, people will say, ‘Sutton Brady got to where she is because of who she slept with.’”

Jane replies, “And that’s not something Richard has to worry about.” (Richard, played by Samuel Page, is Sutton’s current love interest, who is even higher up in the magazine’s ranks, which makes her afraid to commit to him.) Sutton answers, “No, that double standard is like one of the classic rock hits of patriarchy.’

Kat, Jane and Sutton then find a quiet place to discuss the situation, and Kat tells them, “What if... I don't know how to do it? Or what if I do it and I don't like it? Or I do it and it's weird or... You know, then what? Am I really queer, or has this whole relationship been a lie? And why would Adena want to be with someone who doesn't know how to do something that she clearly likes?”

Jane reassures Kat, telling her, “You two are crazy about each other. One sex act is not gonna break you guys up.” Kat then announces that she needs to go find Adena, and Sutton jokes, “Or at least her vagina.”

Back at their apartment, Kat and Adena have an intimate conversation about the problem:

Kat: I kind of feel like I screwed this whole thing up.

Adena: Do you remember what you said to me the first night that we hung out? You couldn't ever... "Do that."

Adena: Couldn't even say it.

Kat: Oh. Yeah, but I didn't know what I was talking about.

Kat: Where no man has gone before.

Adena: You know, Kat, it's not even the act that matters. It's you and me being able to have these conversations. Talking about it is the most intimate thing. And that's-- that's what I should have said at the party. This is what matters.

Kat: I know. But, my God, I've never talked about oral sex so much in my entire life, and I work at "Scarlet." Okay? You don't know what it's like there!

The first episode ends with the show’s usual musical montage as we get glimpses of the various characters and what they’re up to. Or down to, as is the case with Kat and Adena and the very graphic sex scene between them.

Which then leads us to the second episode of the premiere night, “Rose Colored Glasses.” As soon as the episode opens, we see Jane and Sutton trying to reach Kat because they’re dying to hear all the details of her sexual escapades with Adena.

“Well, uh, it was awesome,” Kat tells them. “I mean, I was completely freaked out at first…Then I realized I have one of these, and I know what I like. So, I did it. And I liked it. A lot.”

Then it’s on to the topic of men. As in #TheyreNotAllBad. IF they support leftist feminists.

Scarlet Writer: Another hero caught beating off on camera. How hard is it to keep your junk in your trunk?

Sutton: I don't think you're using that right.

Scarlet Writer: Not the point.

Alex: When in doubt, don't pull it out.

Scarlet Writer: Exactly. Not that hard.

Jacqueline: Ooh, I do not envy any of you having to navigate dating in this climate. So, there is something else that we need to talk about. Our allies. The guys who show up at women's rallies, and who speak up when others are silent. I want to do a roundup of honorable men. Good doctors, firefighters, human rights activists. Alex, you'll do the interviews. And we'll make it a fashion spread.

Oliver: Can't we just do a write-up? You know how I hate styling the general population.

Jacqueline: I have faith in you, Oliver. And you have a great support staff. And a meditation app, if you need it. Kat, we need to bank some content for Snapchat, and this photo shoot will be a perfect place to start. Hashtag "They're not all bad," you know-- you make that better.

Finally, what’s an extremely liberal show without any mention of race? Jacqueline (Melora Hardin), Scarlet’s editor-in-chief, asks Kat to write her bio now that she’s heading up their social media department. Kat turns to Alex, who is black, to help her figure out what to say:

Alex: Well, see, the key is to add as much detail as possible.

Alex: Like, you could add the fact that you're black. It'll read something like, "Kat Edison "Is 'Scarlet' magazine's first black female department head." See, that sounds impressive.

Kat: Yeah, but it's also irrelevant. You know, I'm a department head. That has nothing to do with the color of my skin.

Kat: Yeah, but I'm also part white, and no one asked me to write that down.

Alex: Not the same thing, but okay.

Kat: Uh, any other suggestions?

Alex: Yeah... Kat, you have this really cool opportunity to be a role model for young black girls. Don't you want that?

Kat: Why would you ask me that? Of course, I want that. But I want it regardless of my race, not because of it. It's what's on the inside that matters.

Alex: But you're black on the inside too, Kat.

Kat: Oh, really? Are--are you questioning my blackness right now? Because, uh, up until very recently, you were wearing khakis and cardigans, which is just about the whitest fashion statement imaginable.

Alex: That is an interesting projection of internalized racism.

Alex: I didn't say that.

Kat: Yeah, you didn't have to.

After soul-searching and speaking to her parents, (her mother is white, and her father is black), Kat decides to include her race in her bio after all. When Alex asks her what she chose, Kat answers, “I am Scarlet magazine's first black female department head…And I'm so proud to be biracial. But...for right now, it feels important to embrace this part of myself.”

What would be wrong with saying that she’s the first biracial department head? Why can’t she embrace all her identity? Why does one need to shun the white part of themselves to “sound impressive?” In another storyline, after Richard hires a new board member, Jacqueline quips, “So, let me guess. Another old, white guy.” Just more proof that it’s open season on whites and men in Hollywood, sadly.

In the Vulture interview, Fahy (who plays Sutton) said it best when she opined, “People want to escape sometimes. I think our show has a really good balance of political relevance and entertainment, but sometimes that’s one of my fears. Will it turn people off that we’re trying to have conversations about this, or will they be excited by it? You never really know.”

I, for one, am very turned off. But I fear for the Millennial generation that might be watching and being excited by the extremely liberal agenda they’re being fed.