I have a hate/hate relationship with BuzzFeed. On one hand, I think it posts a lot of useless garbage that I almost never find even the slightest bit interesting. On the other, it also produces strongly biased pseudo journalism, yet gets credentialed by the media because it’s left-wing.

You’ll see BuzzFeed staff all over cable and quoted like it’s a respectable journalistic entity. Then you look on the site and discover videos like, “When You Get Stabbed By A Pencil,” or “Drag Queens Play Never Have I Ever.” Or maybe you’ll see one of BuzzFeed’s classic quizzes, such as, “Can You Remember The "Teen Wolf" Pilot Correctly?” or “Answer Eight Questions And We'll Accurately Guess Your Age.” (It guessed me at 16-18. The Internet didn’t exist when that was true.)

Yes, BuzzFeed sometimes does legit news. But it might be a great test to see whether a like number of monkeys typing would do better, or maybe just less badly. 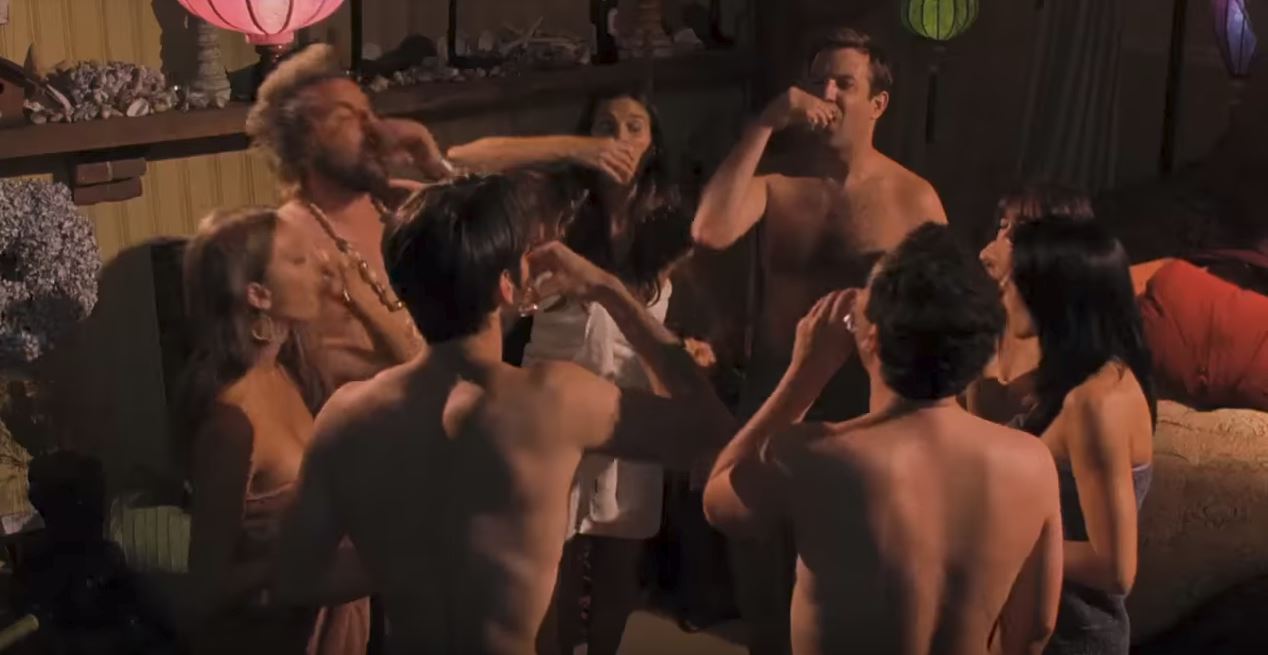 What followed is what most people probably expect from Buzzfeed: porny photos (including little “OMG” circles covering naughty bits, and demented, anything-goes sex tips. Here are a few of the low lights:

It’s important to remember that the only sex liberals seem to oppose is monogamous, heterosexual sex. Anything else, especially including members of the same sex, is encouraged. The kinkier the better.

Remember, BuzzFeed ran the hateful, anti-Christian hit job on Chip and Joanna Gaines -- the couple from Fixer Upper on HGTV. The story, “Chip And Joanna Gaines' Church Is Firmly Against Same-Sex Marriage,” was designed to wreck the couple’s careers. But failed miserably.

The site’s editor-in-chief Ben Smith has defended being biased on LGBT issues before. He wrote, “We firmly believe that for a number of issues, including civil rights, women’s rights, anti-racism, and LGBT equality, there are not two sides."

Take that into account when you see its staff quoted or cited elsewhere or when you see a story floating around like this pro-orgy piece of garbage.

And speaking of garbage takes us to the rest of this week’s column.

I’m Not Fat, I’m Just Drawn That Way: Kudos to those who recognize the play on quote from Roger Rabbit. This week, I found a classic on Glamour. Glamour? Glamour! “It's Not OK If Your Doctor Is Fat-Shaming You.”

This is one of those articles where it helps to know the subject matter. You’ll see me mocking cultural appropriation when an entire nation celebrates St. Patrick’s Day. I can. I’m part Irish. I’m not going to interview my bathroom scale, but let’s be honest here, lately it’s been earning hazardous duty pay.

Our society makes fat jokes. It would make more skinny jokes but there’s less material. Badda bing! We use jokes because they are a way for people to cope. America is a nation with an abundance of food and it shows in every aspect of our culture. But it also leads to overeating and food-related diseases. That’s when we enter medical territory.

Now the job of a doctor is to fix what’s wrong, not just worry about your well-being and avoid telling you the truth. A doctor is supposed to tell you that you’re anemic, not celebrate your pasty glow. He or she is not supposed to say, “Doughy is the new athletic.” Or high five you when your cholesterol hits 300.

But Glamour focused on the weighty tales (Ahem…) of those were fat-shamed by evil doctors doing that thing called medicine. Actual quote: “A doctor told her she was "morbidly obese" (she did not meet the diagnostic criteria).” That patient was thrilled when her “her insurance company randomly assigned her a doctor who was more understanding.” You don’t want an understanding doctor. You want one who addresses your problems. Bedside manner is great. But facts are facts.

Here’s a classic actual quote from a patient: “Every time I go to the doctor and they weigh me, I know there is going to be some kind of talk about being overweight. It's one of the reasons I don't like to go: because so many times, they can't do anything, and then I'm paying a $30 copay for someone to call me fat." Yeah, that awful doctor doing his or her job addressing the … hefty person in the room. (I bet you thought I’d make that joke worse.)

It’s true that we have a lot of idiots making horrible comments about weight. The Hollywood producer who told Jennifer Lawrence to lose 15 pounds is a fine example. But it’s not wrong for docs to do their jobs.

Harvard Has Fallen Far And Fast: Some of the smartest people I know went to Harvard. Went being the key word. Harvard is not looking so hot right now.

Case in point: Harvard University professor Lawrence Lessig’s goofy ramblings about Hillary Clinton becoming president by replacing Trump … this term. Lessig wrote a silly piece for Medium (Hint: Couldn’t get it published elsewhere.) entitled: “IF {THAT} THEN {THIS.}” The subhead was equally vague: “On what should happen if the unthinkable happens.”

Wow, the “unthinkable?” What’s that exactly? Alien invasion? Nope, we have a mountain of books and numerous movies on the subject including Earth vs. The Flying Saucers, Independence Day and Pixels. So clearly not that. You have to get pretty far out there. Like gerbils have invented time travel (No, but they are blamed for the Black Death.) or maybe thinking BuzzFeed is a legit news organization.

Or even better, we might see President Hillary Clinton before the next presidential election.

OK, then how does that get us President Hillary? Here’s how, in this game of mental Mousetrap.

From Trump to Pence to Ryan. (Like Tinkers to Evers to Chance, but with the nuclear football, not a baseball.) Then here’s the fun: “If Ryan became President because the Trump/Pence campaign committed treason, who should he nominate as his Vice President? The answer seems unavoidable: He should nominate the person defeated by the treason of his own party, and then step aside, and let her become the President.”

What’s especially funny is this came out just days before The Hill released its Russian nuclear story that shows we have a heck of a lot more evidence implicating Team Clinton on Russia than Team Trump. Here’s the killer graph you won’t find easily in traditional media:

“They [the FBI] also obtained an eyewitness account — backed by documents — indicating Russian nuclear officials had routed millions of dollars to the U.S. designed to benefit former President Bill Clinton’s charitable foundation during the time Secretary of State Hillary Clinton served on a government body that provided a favorable decision to Moscow, sources told The Hill.”

Naturally, the alt-left loved Lessig’s piece, with Newsweek writing about it, among others. Lessig also wrote a nutty piece in The Washington Post urging the Electoral College to vote for Clinton last year. I’m eagerly waiting for the next Lessig column on Trump’s re-election. 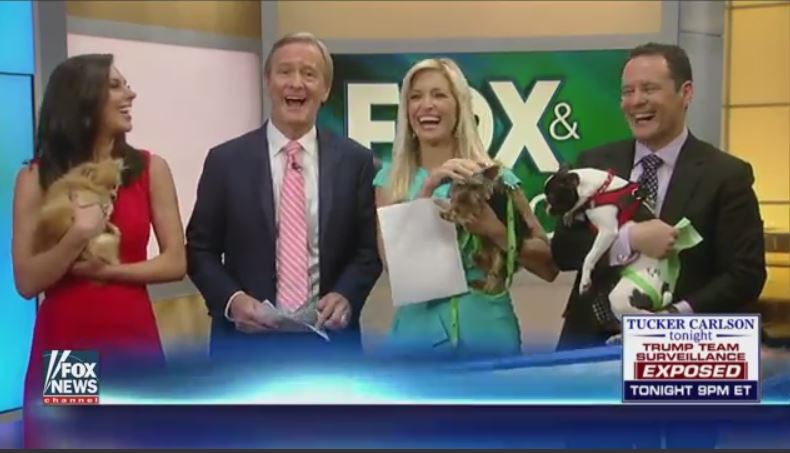 Horrors! Fox News Has Puppies!: I love the alt-left. It treats every visit into conservative media like it’s touring an alien zoo. “This furry critter is called a Wookie and it’s from the planet Kashyyyk. The pointy-eared fellow is either from Vulcan or he’s an elf from Rivendell. I forget which. And then we have, oh my goodness, a knuckle-dragging conservative from some awful place south of the Mason-Dixon called Texas.”

That’s exactly how Vice (Motto: We pretend to be a news organization, if you pretend to watch!) treated a trip into the deep dark void called Fox News. Here’s the actual headline: “I Watched 15 Hours of 'Fox & Friends' and I Want to Die.” The story is anchored with an enormous, screen-filling photo of the Fox & Friends team holding puppies.

Here’s the premise: “Trump's favorite show is now five hours long and starts at 4 AM. I watched all of it for three days and it was INTENSE.” See, alt-lefties can’t stand the idea that anyone watches stuff they disagree with. Remember, the president is supposed to watch useful stuff, like Joe Scarborough and his soon-to-be wife Mika blast everything he claimed to support when he was in Congress. Or maybe even CNN. All the while reading The New York Times and listening to some Vox podcast.

Author Sam Weiner then proceeds to attack the show. Actual quote: “Steve Doocy is the Walter Cronkite of being personally offended by every story. Despite his ever-present grin, his default mode is exasperation. He just doesn't understand how the world could be so cuckoo! He looks like a papier-mâché news anchor mask a child would make.” In the alt-left world, anything nasty you say about Fox is “funny.”

In the middle of the 6 a.m. hour on day two, our hero gives up. “Now, I have to apologize. I couldn't take it anymore. I turned off the TV and went back to sleep. I had a nightmare where I was tricked into performing in an avant-garde play. Because I didn't realize I was in a play, my performance was heartbreakingly realistic and was met with great acclaim. After the show, the director took me backstage and drowned me in a contraption.”

It continues in a similar vein. Actual quote: “I'm feeling infected by Fox & Friends. You know how they say that you evacuate your bowels when you die? I want to evacuate everything. I want to curl in a fetal position and shit, piss, ejaculate, cry, sweat, puke, and have all of my hair fall off. I want every part of me to no longer be a part of me.”

This is why it’s difficult to take alt-left media like Vice seriously. It doesn’t deserve it.