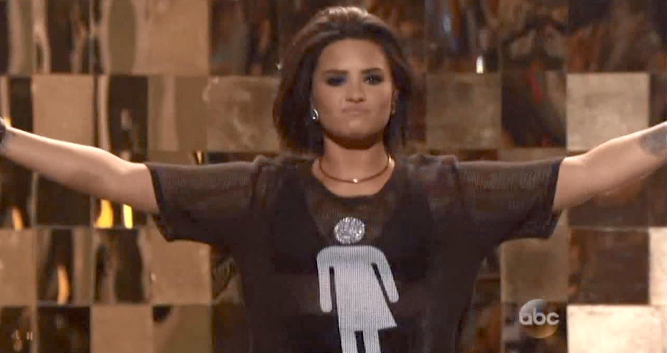 How do you follow up the season finale of one of the most popular shows for children, America's Funniest Home Videos? With Britney Spears doing a stripper dance while singing (lip syncing) the word B##CH over and over of course.

You want a hot body you want a Bugatti you want a Maserati you better work b##ch.

You want a Lamborghini, sip martinis look hot in a bikini you better work b##ch.

You wanna live fancy live in a big mansion party in France you better work b##ch.

And it just wouldn't be a music award show (how many opportunities to self-congratulate does one industry really need anyway?) without a political statement. Demi Lovato was one of the few females not showing everything but nipples, but then again the shirt she was wearing featured the trans bathroom logo. Funny how all of these wonderfully spoiled and overpaid “stars” didn't care about transvestites until a month ago.

I assume that when the first woman is raped in a bathroom by a man dressed as a woman they will all wear shirts in support of her, too. Probably not. Somehow that will be attributed to conservatives. Is it still okay to blame George W. Bush?