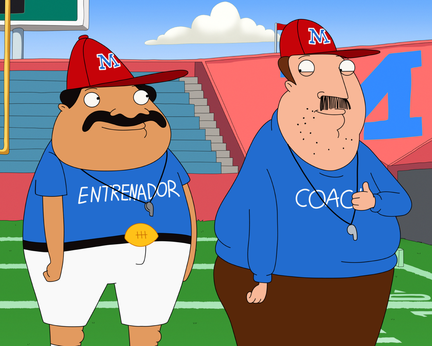 Remember when cartoons were just silly and didn't have an agenda? Those days are apparently long gone. Fox's new venture into the world of adult cartoons, Bordertown oozes agenda from the title to the closing credits. The main character, Bud, is an overweight, racist, border patrol agent from the town of Mexifornia. If you can get past that then you are in for a thirty-minute deluge of insults and innuendo. Unless you don't find a boy getting his lunch money from his stripper mom's thong offensive, or don't mind a good chuckle at substance abuse or domestic violence that is...

This week's episode “High School Football” takes on the admittedly overzealous Friday night fans. In all fairness, the show also mocks the sometimes-violent superfans of soccer as well (seriously those guys are CRAZY!).  But they've got nothing on Mexifornia Scalper fans who routinely burn down the coach's house after a loss. So after taking a jab at “racist” team names like the Redskins it's time to lambaste anyone who does not believe in the dual religions of evolution and climate change.

-Announcer: Welcome to Friday Night Football. Tonight, the Scalpers face off against the Willie Nelson High Heat Strokes as I face off against heroin withdrawal. Is anyone else freezing and sweating?

-JC: George, how can you participate in this wildly offensive and inaccurate caricature of your noble people?

-George: They paid me ten bucks to pose for the mascot. (Marching band plays upbeat tune) Oh, he has clothes on. It's weird they made me pose naked.

-Announcer: Welcome, everyone! Now let's kick off the festivities with the traditional Shooting of a Scientist.

-Bud: You son of a bitch! (Audience members groaning)

Ha! Ha! We get it. Conservatives don't believe in science. VERY original. Apparently all one has to do to get a tv show these days is draw ugly cartoons and have the actors read lines from the Huffington Post. Perhaps the writers of Bordertown could be set adrift on the sea and fall off the edge of the flat Earth! That'll teach em.