'Family Guy': Religion Just 'Blind Subservience to an Imaginary Being' 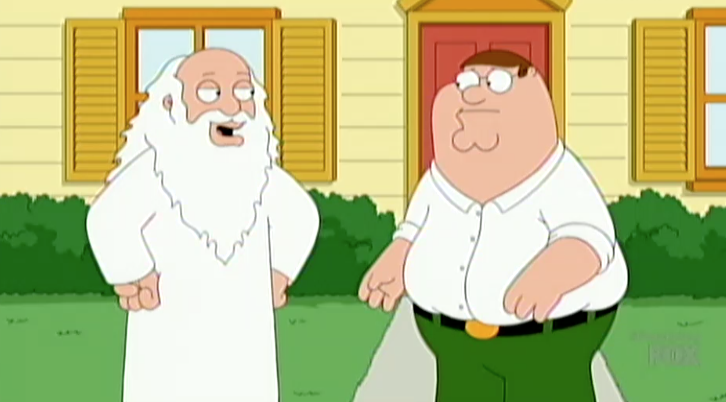 In Sunday night’s episode of Fox’s Family Guy, “Are You There God? It’s Me, Peter,” Peter Griffin meets a very vulgar God while in a coma and eventually learns that God doesn’t exist, which is unsurprising for the show created by notorious atheist Seth MacFarlane. The conversation between the two ranges from God’s non-existence to God’s statement that humans are reincarnated as other animals and humans to God’s misconduct with some angels.

After Peter trips down the stairs and hits his head, he falls into a coma where he meets God in an elevator. The rest of the episode has Peter asking God random questions. Regarding His existence, God uses the common anti-religion argument of likening Himself to a “nanny cam. The idea that I may exist is enough for some people to behave better.”

Peter: Are you real?

Peter: I like to believe there's something bigger than me out there keeping a watch out.

God: Different people think different things. I'm kind of like a nanny cam. The idea that I may exist is enough for some people to behave better.

Peter: When I used to ask my mom what God was, she would say, "God is love." I always liked that.

In order to return to a normal life with his family, Peter has to prove to God that he can be a good father and husband. At the end of the episode, God tells Peter that he succeeded because Peter uttered the phrase, “You were right about everything.” God then explains, “That's what religion is. It's not about being good or bad. It's just blind subservience to an imaginary being.”

Earlier, when Peter asks God why He wasn’t in Heaven, God implies that He has been accused of some sort of misconduct by His angels: “There was an issue. Uh, a-a few angels came forward. I don't remember things exactly as they do, but I respect their experience.”

Additionally, when God critiques Peter’s parenting, Peter retorts, “Oh, says Father of the Year.” Responding to the reference to God sacrificing His son for the sins of mankind, God responds, “Oh, please. He played that for all it was worth.”

God: Well, you're an inattentive husband and a terrible parent.

God: Oh, please. He played that for all it was worth. ‘Why has thou forsaken me?’ You know what? I did him a favor.

Peter: Okay, well, th-there's a lot to unpack there. But come on, God, you gotta give me another chance.

Despite all the religion-bashing, it’s worth pointing out that right when Peter meets God, God tells him, “No Trump questions.” Hopefully that’s a sign that TV show writers are getting bored of the unceasing attacks on President Trump and will go back to just trying to entertain us without dragging politics into everything.