Wednesday night’s episode of NBC’s The Carmichael Show, “Shoot-Up-Able,” which revolved around a mass shooting, was predictably anti-gun and anti-police. The episode was supposed to air June 14, but got pulled due to the shootings in Alexandria, Virginia, and San Francisco that day.

After Jerrod Carmichael survives a mall shooting that resulted in 4 people getting killed, including the shooter, his family gathers to help him cope. But what starts as a humorous conversation about the identity of the shooter (a “29-year-old woman born and raised in the United States”) turns into a swipe at Republicans and the NRA for “blocking sensible gun legislation time and time again.”

Joe: Jerrod what were you thinking, going to a mall at 2:30 on a Saturday like some damn hero? You know good and well that's ISIS happy hour.

Maxine: But Joe, Joe, you don't know who did this.

Joe: Oh, come on, Maxine. You know there's only three options for any random mass shooting. ISIS, racist white, Asian pushed to the brink by his tiger mom.

Cynthia: That's why I didn't push you boys in school. A "D" is still a passing grade.

Joe: But, but see, he should've known better.

Maxine: Wait, are you really blaming Jerrod for just going to the mall?

Joe: Well, who we supposed to blame? The shooter? The NRA? The Republicans for blocking sensible gun legislation time and time again?

Maxine: Those all sound like valid places to start placing blame. 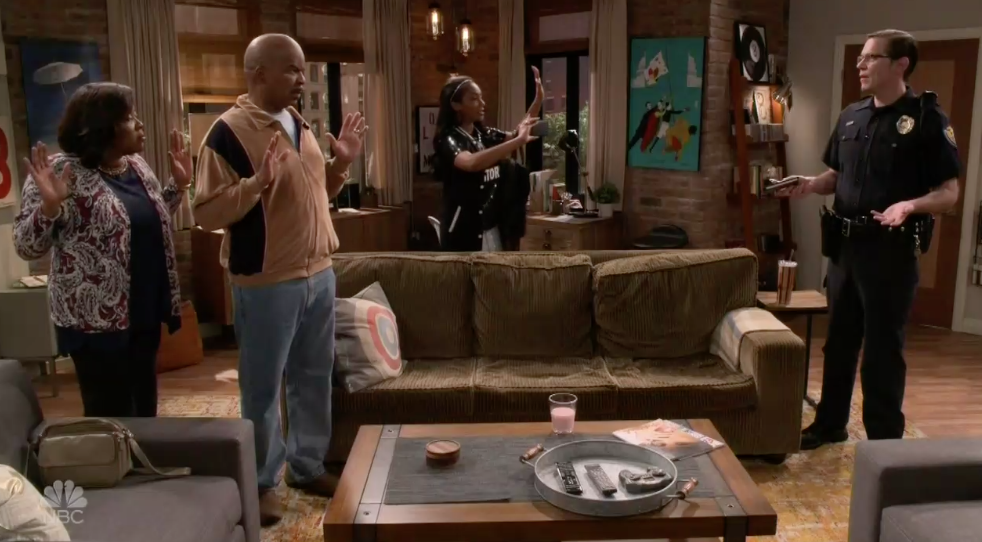 Interestingly, earlier in the episode, Jerrod described the mall as being “shoot-up-able,” somewhere with a “large crowd and little security” causing nervousness. You’d think the ideal target for a shooter is a place with little security that also happens to be a gun-free zone, so the shooter can be sure there’s no one there to resist him. When the law requires that a place be gun-free, it makes it the perfect “shoot-up-able” target.

Joe also makes a comment about how difficult his life would be if his son died, because then he would have to dedicate his life to “anti-gun causes.”

Later, a police officer arrives to question Jerrod about the shooting. Joe, Cynthia, and Nekeisha freak out, putting their hands in the air the whole time while Nekeisha films the interaction. They become even more overly cautious when they learn the officer’s last name is “Zimmerman.” When Maxine worries about the police officer, Joe and Cynthia assure her that she’ll be fine, presumably due to her being half-white.

Joe: I know your job is to protect and serve, but it's hard not to feel a little nervous when you in the room.

Police Officer: You're not a suspect of any crime, sir. There's no reason to feel nervous. I'm just here to talk to your son.

Joe: Honey, that's a good idea. As a safety precaution, Officer, we are now lifting our hands up into the air. No sudden movements now. We got to treat these officers like bears.

Nekeisha: I'm taping this, just so you know. If you shoot anyone, you probably will keep your job, but it's gonna be a rough couple of weeks.

Police Officer: You're, obviously, free to do what you want, but that is extremely unnecessary.

Nekeisha: We are here with Officer G. Zimmerman.

Police Officer: I-it's Greg. There's no relation. It's, it's a common last name.

Maxine: Whoa, what's going on in here? Do we have to have our hands up?

As if this episode wasn’t agenda-driven enough, after the family learns that the shooter was female, Cynthia asks, “Does that count as progress, Maxine?” Nekeisha replies, “After Hillary, I think we should take every win we can get.”

While The Carmichael Show seemed somewhat fair and balanced at the beginning of the season, it has definitely taken a hard left turn.