Apparently those who profess to be most offended by stereotyping and profiling are taking a break, to stereotype and profile Republicans and conservatives.

Reacting to criticism of Colin Kaepernick for sitting during the National Anthem on Friday night, ESPN’s Pablo S. Torre took to Twitter with an open mind, and absolutely no sweeping generalizations: 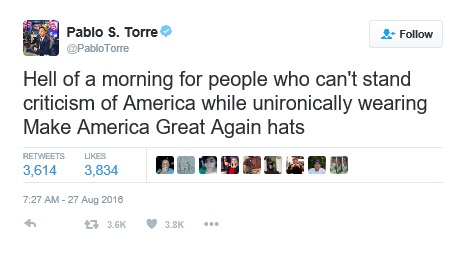 So, according to Torre, the only people upset with Kaepernick are Republicans and Trump supporters? Because only Republicans care about showing respect for the flag? Or, don’t think their country is being run by racists? 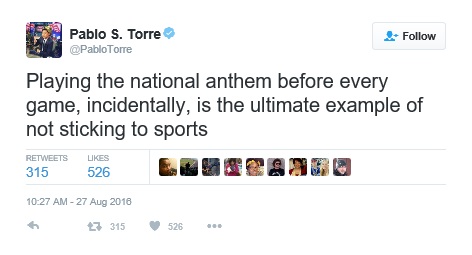 Yeah, it’s not all about sports at all. It’s supposed to be a unifying moment that brings us together as one, before we all yell and scream and foam at the mouth at each other. This is a point understood by most people. These same “most people,” many of whom elected and then re-elected a black President, don’t believe the American flag represents bigotry or oppression.

The fact that it’s apparently not understood at all by the leftist sports media is…well…sadly not surprising. However, heed Torre’s words here, and expect a renewed push on the part of the sports media to eliminate the National Anthem as a quaint old custom that has nothing to do with sports and everything to do with oppression.