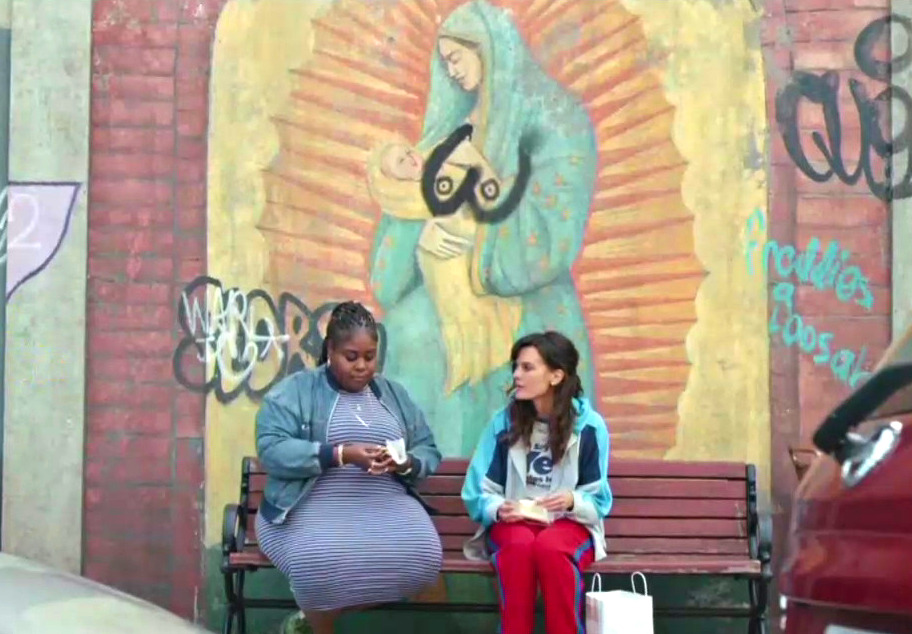 SMILF continues its attack on Christianity in the November 27 episode "Deep-Dish Pizza & a Shot of Holy Water," but this particular episode of the Showtime series takes it to another level when it's suggested, less than a month before Christmas, that the conception of Jesus Christ was rape.

In this scene, Bridgette is shopping with her mom, Tutu (played by Rosie O'Donnell), and Tutu says that one of the ways she supports her daughter is by praying for her by saying, "Dear Heavenly Father, please protect my Bridgette. She's a little lost. She's like a sheep. Please guide her."

When Tutu suggests that Bridgette try praying as well, she could politely decline. Instead, she gets downright offensive in saying the Virgin Mary was sexually assaulted, forced to give birth, and the story told in the New Testament was created to cover it all up.

Bridgette: I'm not gonna pray. I'm not gonna pray to God.  I'm sorry.
Tutu: Yeah, well, you know what? You tell that to God, because he carried that guy across the sand, and there was one set of footprints, Bridgette. Remember that.
Bridgette: That's the dumbest thing I've ever heard.
Tutu: Then, here, how 'about this? You pray to the Virgin Mother. She's my favorite.
Woman: Mine, too.
Bridgette: Mothers cannot be virgins.
Woman: Well, Mary can--she was blessed by the Holy Spirit.
Bridgette: Mary was forced to have that baby.
Tutu: Bridgette!
Bridgette: I'm sorry, but Matthew and Luke and whoever did some stuff to her...
Tutu: I don't wanna hear it, Bridgette.
Bridgette: And then called it an angel baby.
Tutu: Okay, listen to me. That is the mother of God you're talking' about.
Bridgette: Now we're all stuck praying to this "Angel baby."
Tutu: What are you talkin' about?
Bridgette: I am on Mary's side. I am Team Mary.
Tutu: There are no teams. There are no teams  in the Bible.
Bridgette: There are teams. You are helping them get away with it.
Tutu: Bridgette, it's just blasphemous, that's what it is, and I don't really like it.

Bridgette could have said that she doesn't believe in miracles or in the Bible, or even that she believes that Mary and Joseph conceived Jesus within their marriage, but, instead, she makes it about sexual assault, as if Mary is part of the #MeToo campaign and Bridgette is boldly standing up for the victim.

Bridgette is obviously Biblically incorrect. Mary was not "forced to have that baby," as if she would have wanted an abortion. When Mary was told she would give birth, her response was, “I am the Lord’s servant, May your word to me be fulfilled.”

As for her disgusting accusations against the Gospel writers Matthew and Luke, neither could have been Jesus's father, as they were almost certainly younger than He was. If you're going to be incredibly insulting about someone's religion, Bridgette, may I suggest you do some googling first?

Of course, SMILF star and creator Frankie Shaw knows it is safe to say the most vile things about Christianity, but can you imagine if she had similarly blasphemed Islam's Prophet Mohammed at Ramadan?

I am also forced to wonder, how in the world I am on Team Rosie O' Donnell in this nonsense show? Fortunately, I'm not alone in hating SMILF, as ratings continue to plunge. Here's hoping for its quick death (and no resurrection).