Another unconscionable skeleton was recently discovered in Planned Parenthood’s closet, thanks to undercover video.

The Center for Medical Progress released a video on July 14, 2015, exposing a Planned Parenthood executive explaining how the organization sells organs from aborted babies.

The major abortion provider not only relies on taxpayer dollars, it is well funded by prominent liberals. One of them is Berkshire Hathaway Chairman & CEO Warren Buffett, who is a long-time supporter of abortion groups, including Planned Parenthood. He gave Planned Parenthood hundreds of millions of dollars between 2001 and 2012 and upped his giving in 2013. Between 2001 and 2012, he spent $1.2 billion funding pro-abortion groups.

In 2013 alone, Buffett donated $99,809,148 to abortion groups including $62 million to Planned Parenthood. The additional $37.7 million to five other pro-abortion organizations. That’s enough money to kill 221,306 babies through first trimester abortions, according to the pro-abortion Guttmacher Institute. 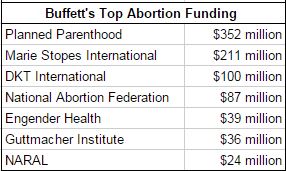 Buffett’s 2013 Planned Parenthood donations exceeded his giving to the group from the previous year by more than $4 million - and were more than two times the amount he donated in 2010.

As Buffett’s financial support for abortion has increased, so have the horrific scandals surrounding the abortion industry and Planned Parenthood. The sale of aborted baby’s organs is just the most recent gruesome revelation about Planned Parenthood.

According to a Live Action investigation, four separate Planned Parenthood clinics were willing to earmark donations for minority abortions.

In May 2014, a former Planned Parenthood abortionist lost his medical license after being caught sexually molesting his patients. During that same time, a Planned Parenthood in Pinal County, Ariz., listed the rape of a 15-year-old girl as a “consensual encounter,” in order to prevent the “hassle of having to report the assault to law enforcement.”

At the very top of the organization, Planned Parenthood president Cecile Richards has declared that when life begins isn’t “really relevant” to abortion.

The group is the largest provider of abortions in the United States. It performed only one adoption referral for every 149 abortions according to the 2012-2013 Planned Parenthood Annual Report.

Since the story broke, ABC and CBS both ignored the story of Planned Parenthood’s organ selling tactics, while NBC only gave the story 39 seconds. Similarly, the broadcast networks have similarly failed to discuss Buffett’s financial support for abortion, preferring to focus on the “Oracle of Omaha’s” business acumen.