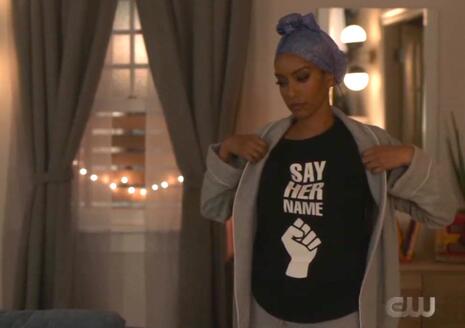 Welcome to TV’s Worst of the Week, where MRC Culture's on TV Blog recounts the top liberal bias moments in entertainment television.

• The fall tv season kicked off this week with the Emmys on CBS. It was a lame, tame show compared to the Trump years with jokes and mentions of the California recall and plight of women in Texas that didn’t hit the mark.

• The white guilt was poured on pretty thick on the season premiere of The Neighborhood on CBS. After learning that Dave's (Max Greenfield) great-great-grandfather stole land from Calvin's (Cedric the Entertainer) great-great-grandfather back in the 1800s, Calvin’s family is resentful Dave “benefited from the racist laws that gave his family land that contributed to the generational wealth that was then passed down to make his life a whole lot easier.” Meanwhile, Dave is heartbroken, “knowing that my family was a part of America's racist past.” But, luckily, his wife says, they are raising their son “to be an enlightened, anti-racist human.”

• FX's American Horror Story took revenge on so-called “bad apple” cops by having them go crazy so they are killed by their fellow officers much in the same way BLM thinks police shoot black people. In the news video shown, you can see the cop is just standing there empty-handed when the other police shoot him:

• The 41st season of Survivor on CBS brought the wokeness overload of the husband of a “transgender pregnant man” getting the show to ban the use of the word “guys.” Watch as two men decide the word “guys” is wrong, after the women in the group had earlier approved it:

• A hip "Christian pastor" offered a parable about "opium dick," a pop star who "listens to God" offered sex to high schoolers as an academic prize, and a pretentious teen gave philosophical justifications for prostitution in FX on Hulu's latest episode of The Premise. Watch the offensive "biblical" parable parody:

• The CW’s Supergirl lectured on “blind spots” with the new black lesbian superhero, Guardian, unable to get the other superheroes to help a black neighborhood. We’re also told that racism and discrimination will never go away and that even in the 31st century “there are generational scars.” Also, Guardian wears a "Say Her Name" t-shirt and reads Robin DiAngelo’s “White Fragility” and Ta-Nehisi Coates’ “Between the World and Me.”

• The NBC Law & Order: SVU premiere had a politician caught sex trafficking minors as interns and blackmailing public housing recipients into sex for housing and the show name dropped Rep. Matt Gaetz (R-FL): “I don't want this investigation to stall out, like the Feds with that-- that Ken doll, Gaetz.”

• The Wonder Years black reboot on ABC began by implying nothing has changed since 1968: “Growing up, Mom and Dad gave me ‘The Police Talk’ about how to handle yourself around cops. There was a presidential election that created a racial divide, and there was a flu pandemic that they said would kill a million people around the world. But it was 1968.”