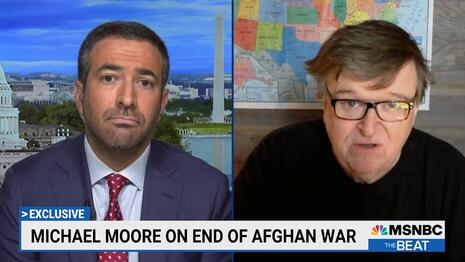 Melber played clips from Moore’s infamously deceitful 2004 film Fahrenheit 9/11 and acted as if last month’s deadly, disastrous withdrawal was a vindication of the director. If you believe that, I’ve got an American-made pipeline in Afghanistan to sell you. Melber also helped promote Moore’s inappropriate free online screening of Fahrenheit 9/11 ahead of the 20th anniversary of Sept. 11.

The radical leftist director, who has spent the past few weeks comparing various groups on the right he doesn’t like to the Taliban, gushed over our feckless Commander-in-Chief. As The Hollywood Reporter put it:

… the Fahrenheit 9/11 director threw his support behind Biden’s decision to end the decades-long war in Afghanistan and the presence of American troops in the country. “I think that I’m so proud of President Biden — who I did not vote for in the Michigan primary; I voted for and I worked for Bernie Sanders — and I have been completely surprised and feeling we’re all blessed to have Joe Biden in the White House in these last months,” Moore said.

Ah, yes, appallingly cutting and running from Afghanistan, violent crime spiking in Democrat cities across the America, COVID deaths increasing due to the Delta variant, as well as a worsening crisis on the southern border. We are all SO BLESSED!

And yet the obnoxious oaf continued his praise, bizarrely claiming that it’s Democrats who always cower and cave to the other party, as if it’s really conservatives who are running this country (I WISH!)

Moore expressed that he was not only impressed by what the president has been able to achieve in his first year in office, but in his ability to stand bravely and never walk back “like a politician, and especially a Democratic politician would.”

“They would get afraid of the Republicans in the right-wing,” Moore said. “Democrats [have] such a history of walking things back like this. He wouldn’t walk it back. He just said, ‘No this is wrong. I promised you when I ran for office, I’m pulling those troops out. This war is going on way too long.’ And it’s exactly what he did. A politician kept his word.”

It’s not admirable to keep your word when it leads to 13 U.S. servicemembers being killed, hundreds of Americans left behind, untold thousands of Afghans to be raped and tortured to death, and a new terrorist safe haven the likes of which we haven’t seen since 9/11/2001. In that case, it’s shameful and despicable.

Moore went on to excuse the preventable chaos and destruction left in the wake of the American pullout, comparing Biden to – wait for it – Winston Churchill.

“You can have the discussion of how crazy it went at the end, but all evacuations — from Dunkirk, before and after — [have],” he said. “I mean, Churchill is considered a hero with Dunkirk. There were 15,000 allied lives lost in trying to evacuate those soldiers off that beach in France at the beginning of World War II. It never goes right, it never goes well.”

I think it goes without saying, Biden is no Churchill. And let’s not forget, the Dunkirk evacuation allowed the Allies to live to fight another day and ultimately win the war.

Biden’s not regrouping to defeat our enemies, he surrendered to them and declared, "Peace for our time."