Sean Penn: Trump Like Mass Shooter ‘Gunning Down Most Vulnerable’ From White House 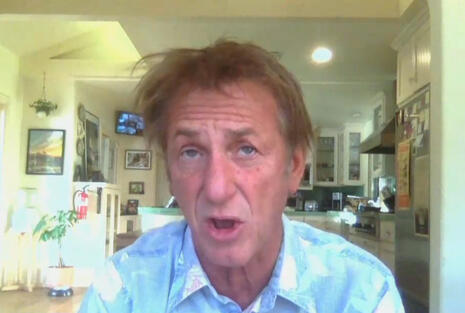 Over the years, infamous lefty star Sean Penn has shown a lot of love for brutal dictators, but his hatred for our 45th president reached new levels on Saturday when he called the Trump administration “obscene” and compared the former president to a mass shooter “gunning down communities.”

At the press conference for the premiere of a new film he directed at the Cannes Film Festival, the subject of COVID-19 and Penn’s charitable work in combatting the coronavirus came up. But talk quickly turned political, with Penn pointing the finger of blame directly at President Trump.

Calling it “plain to the eye,” he tore into the Trump administration’s handling of the coronavirus.

“We were — not only as a country, but as a world – let down and openly neglected, misinformed. We had truth and reason assaulted under what was in all terms an obscene administration,” the actor ranted, reading directly from the TDS script.

“When my team and I would come home from test and vaccination sites at night, particularly during the testing period during the Trump administration, to maddening news – it really felt like there was someone with a machine gun gunning down communities that were the most vulnerable from a turret at the White House.”

That’s an escalation from Penn’s comments in March when he accused Trump of being “guilty of negligent homicide on a grand scale.” I wait with bated breath to hear what he has to say about New York Governor Andrew Cuomo.

Of course, President Joe Biden is the savior in all this, riding in on a white horse to shine a light after the darkness of Trump: “In the transition to the task force that President Biden put together, it was really that feeling like a sun was rising,” the Hollywood star gushed.

On the other hand, “There was no effort of integrity coming from the federal government until the Trump administration was dismissed.” Obviously, he’s forgetting about Operation Warp Speed and how vaccinations began under Trump.

Apparently, Trump Derangement Syndrome only gets worse the longer he’s out of office and will be harder to eradicate than the coronavirus.