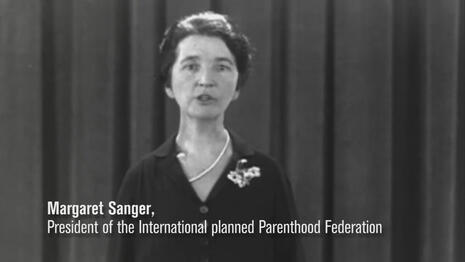 The CEO of the biggest abortion business in America finally came out and owned up to the dark past of its founder, Margaret Sanger.

Planned Parenthood “must fully take responsibility for the harm that Sanger caused to generations of people with disabilities and Black, Latino, Asian-American, and Indigenous people,” Alexis McGill Johnson wrote in the New York Times on Saturday, finally acknowledging Sanger’s “association with white supremacist groups and eugenics.”

“But was she, or was she not, racist?” McGill Johnson asked. “It’s a question that we’ve tried to avoid, but we no longer can. We must reckon with it.”

Except, she spent the rest of the piece avoiding answering the question, saying it’s “not a simple yes or no question.” She never came out and admitted Sanger was racist, explaining, “We don’t know what was in Sanger’s heart” while “comdemn[ing] her harmful choices.” If only Planned Parenthood, the Times or any other progressive institution were so quick to give modern conservatives the benefit of the doubt.

That means no more centering women’s health – that’s transphobic and racist! Planned Parenthood has “a history of focusing on white womanhood relentlessly” and McGill Johnson was apologetic that “when we focus too narrowly on ‘women’s health,’ we have excluded trans and nonbinary people” and “we’ve claimed the mantle of women’s rights, to the exclusion of other causes that women of color and trans people cannot afford to ignore.”

The op-ed further devolves into a wokeathon, condemning “the dehumanization of Black and Latino victims of police violence” and “trans-exclusionary radical ‘feminists.’” McGill Johnson even said they don’t want the organization to be a “Karen,” but “sometimes, that’s how Planned Parenthood has acted.” Seriously.

In 2020, Planned Parenthood of Greater New York removed Sanger’s name from their flagship abortion clinic after employees complained about the org having “a history and a present steeped in white supremacy.” Now, finally, the national organization is addressing the issue.

What advances white supremacy more than the targeting of minorities and the disproportionate killing of unborn black babies in the womb?

“Whether they personally identify with Sanger’s ideology or not, they continue to carry out her mission, by serving as the leading executioner of our children,” Watson said. “The same Sanger they claim to disavow would applaud their efforts and results, as a disproportionate percentage of Black children have been killed in Planned Parenthood’s abortion clinics.”

“Acknowledging a racist history does not absolve them of the blood on their hands, as they continue to take full advantage of victims of the racism they decry,” Watson said.