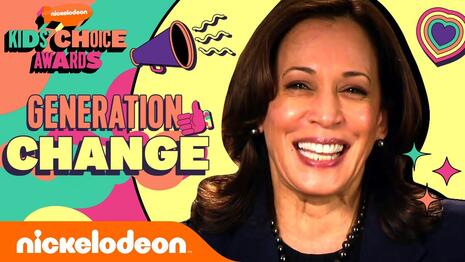 She should have gotten slimed, but on Saturday, actress Jennifer Garner praised pro-abortion Vice President Kamala Harris, declaring she’s had “a lifetime of being a champion of kids and family issues.” Even worse, Garner was peddling this lie to children!

At the Nickelodeon Kids’ Choice Awards over the weekend, the two women presented the Generation Change Award to “today’s kids.” In introducing her, Garner fawned over the leftist VP for the “love in [her] heart” and hailed her for “always looking out for the underdog.” Let’s face it, there is no bigger underdog than the unborn baby in the waiting room of a Planned Parenthood and abortion is the absence of love. But who cares when "Momala" is such a "trailblazer"?

Jennifer Garner: Here with a special message for you, let me introduce another trailblazer, Vice President Kamala Harris, who made history this year by becoming the first woman, first person of color and first "Momala" to hold this office. Becoming vice president was not only a new beginning for her, it was also the culmination of a lifetime of being a champion of kids and family issues and always looking out for the underdog. Like you, Vice President Harris shows us that anything is possible with hard work, dedication, and love in your heart. So it's my honor to welcome the Vice President of the United States of America, Kamala Harris.

Kamala Harris: Hi, everyone, and thank you, Jennifer for that introduction. Thank you all to Nickelodeon and thank you to the young leaders for being so incredible and for all that you do and will do. From social distancing to remote learning, you've been through a lot this year, but through it all, you young leaders have really stepped up. You've won your mask, helped out your neighbors, been a role model in your community. When I was young, my mother used to say don't just sit around and complain about things, do something about it. Well, you are doing something. You are creating a better future, and you inspire me and President Biden every day. We are so grateful to you, and we want you to know that we are doing everything we can to make sure all of our students and our young leaders can get back to school and back with your friends and be safe and thrive. Thank you for stepping up. You make us and your country so proud.

Harris has a long history of championing abortion, to the detriment of kids and families. When she was California Attorney General, she prosecuted the Center For Medical Progress for their undercover footage of Planned Parenthood admitting to selling baby parts, even raiding the home of CMP President David Daleiden. In the Senate, she voted in favor of legalized infanticide. As Time magazine noted, “During the presidential primaries, Sen. Kamala Harris proposed a law, modeled on the Voting Rights Act, that that would protect the right to abortion nationwide.” When Harris was picked for Biden’s VP slot last August, pro-lifers declared them the “most pro-abortion presidential ticket in American history.” It's clear there's one place she doesn't want kids to "be safe and thrive" and that's in the womb.

It should also be noted that despite Harris’ promise that they’re “doing everything [they] can” to get students back to school, the Biden-Harris administration keeps moving the goalposts and ignoring its own experts on reopening, all to benefit the teachers’ unions, a key Democrat constituency. They don’t follow the science, they follow the money, and kids are suffering greatly.

Michelle Obama was involved with the Kids' Choice Awards multiple times during her tenure as First Lady. Shocking that we went 4 years without someone from the White House being on the program, but now, the very first chance after Trump leaves office, VP Harris participates. Because, presumably, the former most liberal senator is not considered as controversial as anyone from the Trump White House. The liberal bias even extends to Nickelodeon.