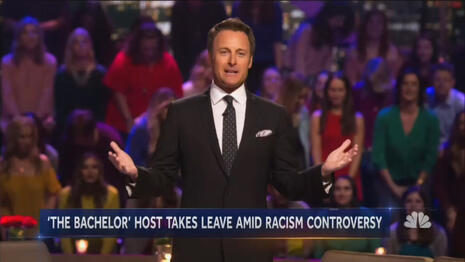 Harrison first stepped in it last Tuesday by defending a contestant, Rachel Kirkconnell, who had old college pictures resurface of her at an “antebellum plantation-themed fraternity ball in 2018.” In an interview with Extra’s Rachel Lindsay, who rose to fame as as the first black Bachelorette, Harrison blamed the “woke police” for the attacks Kirkconnell was receiving and called for “a little grace, a little understanding, a little compassion,” enraging the cancel culture mob.

There was a swift backlash from the usual suspects and by Wednesday Harrison was begging forgiveness for causing “harm by wrongly speaking in a manner that perpetuates racism.” He also apologized to Lindsay “for not listening to her better on a topic she has a first-hand understanding of” and “humbly thank[ed] the members of Bachelor Nation who have reached out to me to hold me accountable.” Thank you, sir, may I have another?

But it wasn’t enough. Lindsay was still not happy, even after talking privately with Harrison, and announced in a podcast interview released on Friday that she would not be renewing her contract with The Bachelor. (As Variety noted, this wasn’t the first time she's threatened to leave; last summer, during the Black Lives Matter riots, she demanded a black Bachelor be cast and immediately after, The Bachelor announced its first black male lead.)

The following day, Saturday, Harrison issued his second groveling apology in a week in which he announced on Instagram he “will be stepping aside for a period of time and will not join for the After the Final Rose special.”

It was such a weak, sniveling apology he actually included the line, “I humble myself before all of you.”

He also said his prior invocation of the term “woke police” was “unacceptable” and expressed, “I am ashamed over how uninformed I was. I was so wrong,” before specifically apologizing “To the Black community, to the BIPOC community.”

I have spent the last few days listening to the pain my words have caused, and I am deeply remorseful. My ignorance did damage to my friends, colleagues and strangers alike. I have no one to blame but myself for what I said and the way I spoke. I set standards for myself, and have not met them. I feel that with every fiber of my being. Now, just as I taught my children to stand up, and to own their actions, I will do the same.

By excusing historical racism, I defended it. I invoked the term “woke police,” which is unacceptable. I am ashamed over how uninformed I was. I was so wrong.

To the Black community, to the BIPOC community: I am so sorry. My words were harmful. I am listening, and I truly apologize for my ignorance and any pain it caused you. I want to give my heartfelt thanks to the people from these communities who I’ve had enlightening conversations with over the past few days, and I am so grateful to those who have reached out to help me on my path to anti-racism.

This historic season of The Bachelor should not be marred or overshadowed by my mistakes or diminished by my actions. To that end, I have consulted with Warner Bros. and ABC and will be stepping aside for a period of time and will not join for the After the Final Rose special. I am dedicated to getting educated on a more profound and productive level than ever before. I want to ensure our cast and crew members, to my friends, colleagues and our fans: this is not just a moment, but a commitment to much greater understanding that I will actively make every day.

Once again, the woke police get their man.