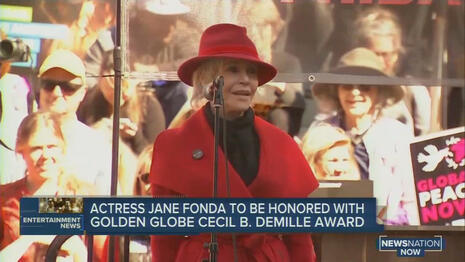 On Tuesday, the Hollywood Foreign Press Association (HFPA) announced that Jane Fonda will receive the Cecil B. DeMille Award at the Golden Globes on Sunday, February 28.

In layman’s terms, that means “Hanoi Jane” will be fawned over for her left-wing activism by fellow lefties and given the chance to lecture a world-wide audience for several minutes, with a couple nods to her career in the entertainment industry thrown in for good measure. At least, that’s what I’ve gathered based on my knowledge of awards shows and this statement from HFPA:

“The Hollywood Foreign Press Association takes great pride in bestowing the 2021 Cecil B. DeMille Award to Jane Fonda,” said HFPA President Ali Sar in a statement. “For more than five decades, Jane’s breadth of work has been anchored in her unrelenting activism, using her platform to address some of the most important social issues of our time. Her undeniable talent has gained her the highest level of recognition, and while her professional life has taken many turns, her unwavering commitment to evoking change has remained. We are honored to celebrate her achievements at the 2021 Golden Globe Awards.”

Don’t worry, we at the MRC Culture on TV Blog will watch so you don’t have to and then report back on all the lowlights. After all, we’ve been down this road with the Globes’ Cecil B. DeMille Award before. In 2018, when Oprah Winfrey received the honor, she praised the media’s “insatiable dedication to uncovering absolute truth,” and in 2017 Meryl Streep went on a six-minute anti-Trump diatribe.

I’m going to go out on a limb and guess Fonda will use her platform to go on a screed about global warming. That’s her cause du jour lately. She’s a big fan of the Green New Deal, wants to end fossil fuels and started Fire Drill Friday protests in D.C. where she and other climate activists try to get arrested. She’s also into social justice, Marxism, and intersectionality so get ready for gobbledygook like this:

It will be interesting to see if any mention is made of her most infamous political action - her visit to North Vietnam to provide aid and comfort to our enemies during wartime. The 83-year-old actress has since expressed regret specifically for the photo of her sitting on a North Vietnamese anti-aircraft gun but never for broadcasting anti-American messages on Radio Hanoi or calling tortured American POWs "hypocrites and liars." The Golden Globes would be the perfect occasion to try to right those wrongs. But somehow I don't think a Hollywood ending is in the script.