South Park: President Wants Pandemic to Continue to ‘Get Rid of All the Mexicans’ 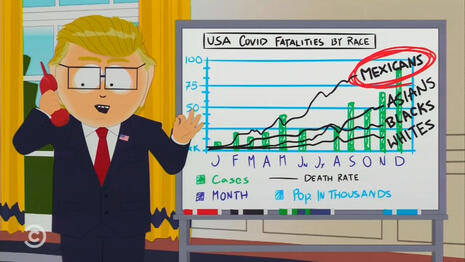 South Park returned on September 30 for “The Pandemic Special” – a standalone hour not attached to a season. There were many wild, intertwining, timely storylines throughout the 60 minute cartoon – including an over-militarization of the police/brutality subplot where police officers take over in the classroom for teachers refusing to return to school – but the most overtly political moments involved the president, who is an odd combination of South Park character Mr. Garrison and President Trump.

One scene begins with the president blowing off the CDC, FDA and Dr. Fauci in the crudest of terms – but he will pick up for Mr. Slave, his former lover. Come to find out, it’s Stan calling to ask for help to stop the pandemic but President Garrison/Trump wants to “actively not do anything” because it’s killing Mexicans and that helps him fulfill his promise to the American people “to get rid of all the Mexicans.”

Staffer 1: Mr. President! The CDC is on the line. They need to speak with you urgently!

President: Tell them to suck my asshole.

President: Ooh! Tell Fauci to shove it up his ass and let the FDA chief know he can eat shit off my balls.

Staffer 3: Sir! Sir, you have an urgent call on line four from a Mr. Slave.

Stan: I'm sorry. We had to get your attention. Listen, we're being kept at the school, and one of the students here is really sick.

President: Oh, for Pete's sake, here we go again. Just deal with it. I am busy.

Stan: No, no, Mr. President, please! You gotta come back to South Park. Our teachers are shooting people! Everyone's arguing, and -- and there's a facility outside of town that found the pangolin and are working on a vaccine. You might be able to stop the pandemic!

President: Why would I do that?

President: Stan, this is gonna be very difficult for a child to understand, but I made a promise to the American people -- to get rid of all the Mexicans.

President: It's killing a lot of them. I've gone over the statistics, Stan. All I have to do now is sort of guide the avalanche in right direction, and I'm fulfilling my promises to the American People. I was doing a crap job until this pandemic happened.

Stan: You're just going to sit there and not do anything?

President: I am going to actively not do anything. And you can eat shit off my balls and die.

The bizarro Garrison-Trump amalgamation flips real life on its head – where in the South Park world, the president “was doing a crap job until this pandemic happened,” the opposite of that was happening with the economy under President Trump. Also, obviously, President Trump has every incentive and is eager to get a successful vaccine as soon as possible to return the country to the way it was before COVID-19, which would also greatly improve his election chances.

And yet, President Garrison opposes a vaccine to the point of killing the pangolin (long story!) that is the key to finding a cure.

Scientist: Now we have hope. We've learned that we might never get back to our old lives, but by working together, we just might find a new way to-- Aargh! Ohh!

President: Don't forget to get out and vote, everybody! Big election coming up.

Liberal TV critics found this moment highly significant for breaking the fourth wall with what they all found to be an “earnest” plea to vote. This was epitomized in the Daily Beast’s article “‘South Park’ Breaks the Fourth Wall With a Rare Plea for People to Vote:”

But on Wednesday night, the long-running animated show defied its central tenet—the one insisting that caring at all is the stupidest position to take in any argument. And it did so in a way that one might imagine could perplex its creators, Matt Stone and Trey Parker, in their younger years. South Park closed its super-sized pandemic special with a simple, (mostly) earnest message: Vote.

Similarly, USA Today said, “Subtle as it was, the scene is still a stark departure for a show whose prime directive has long been to never show it cares – especially when it comes to politics.”

Entertainment Weekly called it “surprisingly sincere” and “an unusual moment of advocacy for the ever-facetious series.”

“The way it handled the political situation stood out from the norm,” said Digital Spy. “…the special ended with something new for the show: the characters breaking the fourth wall and directly telling the audience to go out and vote.”

The New York Post highlighted “Mr. Garrison turning to the camera and seriously imploring, ‘Big election coming up. Don’t forget to get out and vote’” as one of “two earnest moments” in the episode.

Forbes called it “an earnest plea, asking the audience to vote” before ranting that Biden is not socialist enough and repeating the “very fine people” lie:

Which is ironic, as the show once famously depicted the act of voting as a thankless task, always a choice between a “douche” and a “turd.” Joe Biden, with his contempt for the Green New Deal and Medicare for All (during a global pandemic and climate emergency, no less) might be a steaming, corn-flecked turd, but this time, his opponent can't be compared to a douche - even a douche wouldn’t describe white nationalists and neo-Nazis as “very fine people.”

I think they're reading too much into it, but clearly South Park has been changing, as evidenced by its reversal on global warming a few seasons ago. The official start date of season 24 still hasn't been announced, so we'll have to wait and see if they have any further messages about the election.