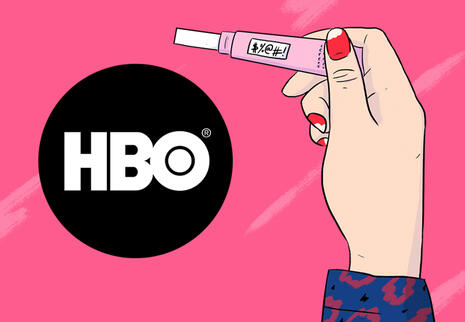 “A teenage abortion road trip movie doesn’t immediately seem like it would be packed with punchlines … but UNpregnant is the rare adolescent comedy that’s both spiky and sweet.”

Described by the stars as both “an adventure comedy” and “a road trip-y, friendship movie,” UNpregnant follows two Missouri teens as “they travel more than 900 miles to Albuquerque, which is the closest place Veronica can obtain a legal abortion without parental consent.” How adorable!

Coggan admires how “the film nimbly weaves between heavy drama and manic shenanigans,” noting, “It’s certainly the only film this year that includes a candid breakdown of an abortion procedure and a slapstick scene involving a taser.” Abortion and slapstick comedy – a match made in heaven!

But the mood turns more sober when abortion access comes up. You can joke all you want about dead babies, but women’s rights is super serious, guys!

In between all the jokes and road trip mischief, there's a particular timeliness to Veronica and Bailey's story: Last summer, at the same time the film was announced, Missouri health officials attempted to close the state's only operating clinic, which would've made it the first state without a single abortion clinic since Roe v. Wade. (Since then, it's been ruled that the clinic could remain open.)

Funny how they don’t mention that lone St. Louis, Missouri clinic’s ghastly record of injuring at least 76 women in botched abortions. Also left unsaid is that Planned Parenthood just opened up a huge new abortion facility a few miles from St. Louis, across the border in Illinois, so there would be no change in access if Missouri’s last clinic finally closed.

The “abortion comedy” is no doubt meant more to elicit clapter than guffaws but “they hope audiences will both laugh and learn something” from their propaganda.

“I want there to be less shame and stigma around the topic of abortion,” she explains. “I want to educate people on the problematic existing laws and also demystify the abortion procedure. I’m not sure if one movie can do everything I want it to do, but it’s not going to stop us from trying.”

Yeah, that sounds like a sure-fire recipe for comedic gold!

Meanwhile, UNpregnant is simply the latest example of Hollywood’s constant mission of “normalizing” the violent killing of the unborn:

“We’ve seen films about abortion that are really hard, and they just tug on your heartstrings, and they’re very traumatic,” Ferreira, 23, adds. “I love those films, but I also wanted to see something where it normalizes it. It normalizes the choice and the decisions that people have over their bodies.”

This is nothing new. In fact, this is not even Hollywood’s first attempt at an abortion comedy. For film, there was the 2014 “abortion romantic comedy” Obvious Child and 2015’s “funny” and “brilliant” Grandma, starring Lily Tomlin. On TV, Hulu’s Shrill and HBO’s Veep both made jokes out of abortion procedures.

Nor is the premise original. There’s even a “feel-good comedy” play called Abortion Road Trip, where the main character travels from Texas to New Mexico for an abortion. Earlier this year, a similar story was told in the dramatic film Never Rarely Sometimes Always of a teen traveling to New York City to have an abortion without her parents’ consent.

Needless to say, whenever UNpregnant is released on HBO Max, it will remain UNwatched.