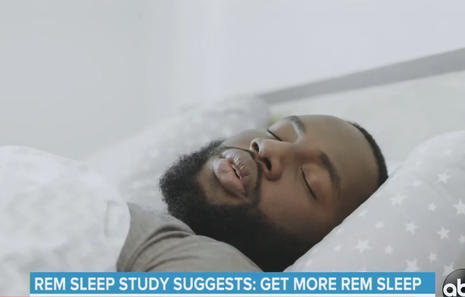 Brittney McNamara highlighted the issue on Friday in Teen Vogue in a story about Fannie Sosa and Navild Acosta, the creators of Black Power Naps (BPN), described on its website as “a sculptural installation, vibrational device and curatorial initiative that reclaims laziness and idleness as power.” Ok, whatever that means …

They created BPN because they were tired, “but it wasn't just any old fatigue,” reported Teen Vogue, “they were specifically experiencing a generational fatigue familiar to Black people and people of color.” As Sosa claimed, “We inherited this exhaustion.”

They don’t simply claim that worrying about current racial tensions is keeping them up at night. They seek “a recognition of the hundreds of years of sleep deprivation that Black people and people of color have experienced as a result of systemic racism, a way to push back against the false stereotype that Black people are lazy, and an investigation of the inequitable distribution of rest.”

No investigation need – there is no “distribution” of sleep, rest isn’t some kind of a zero-sum game. One white person sleeping in doesn’t force a black person to wake up any earlier and vice versa.

But, of course, “there's something deeper going on” and it’s traced back to slavery:

Acosta explained that sleep deprivation was used as a means of control over enslaved people, meaning Black people haven't been getting the sleep they need for generations.

“We’re dealing with an inheritance of sleep deprivation. Sleep deprivation was a…deliberate tactic of slave owners to basically make the mind feeble,” he said. “That same tactic has only evolved.”

Evolved how, exactly? It’s been 160 years since slavery ended. It’s left unexplained how horrific torture tactics from the 1800s could possibly affect those in 2020 America. There are no enslaved peoples being deprived of sleep by sadistic owners anymore and exhaustion isn’t some gene passed down from one generation to another.

And yet they are “calling for rest as reparations.” They want to claim the vacation time their ancestors never got.

Obviously, it is absurd to claim a sleep deficit from centuries ago as your own, but wanting reparations in the form of money, time AND space proves they’re just dreaming.