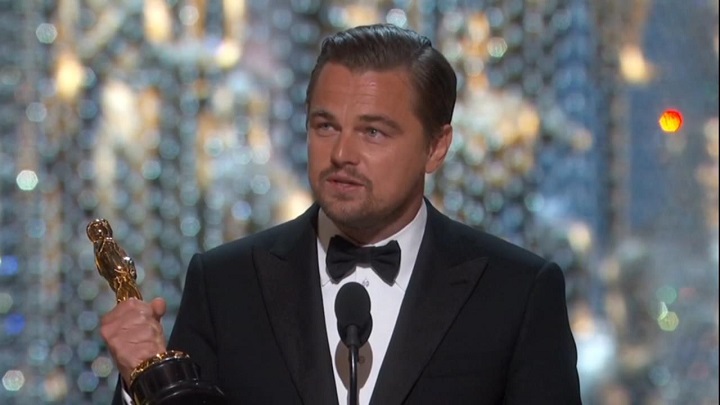 Along with the red carpet, Best Picture, and the Oscar itself, the annual Academy Awards has become synonymous with left-wing political speeches and grandstanding. Since 2016, MRC Culture's On TV blog has covered the Oscars in all its liberal glory, from the anti-Trump opening monologue jokes to the activist acceptance speeches.

As we prepare for Sunday's Academy Awards broadcast on ABC, let's take a trip down memory lane to see some of the worst political moments in recent years.

Leonardo DiCaprio won the Oscar for Best Actor and, just as he did when he won a Golden Globe that year and in years since, he went on a rant about saving the planet.

Leo: And I want to say this. Making "The Revenant" was about man's relationship to the natural world. A world that we collectively felt in 2015 as the hottest year in recorded history. Our production needed to move to the southern tip of this planet just to be able to find snow. Climate change is real. It is happening right now. It is the most urgent threat facing our entire species and we need to work collectively together and stop procrastinating. We need to support leaders around the world who do not speak for the big polluters, the big corporations, but who speak for all of humanity, for the indigenous people of the world. For the billions and billions of underprivileged people who will be most affected by this. For our children's children and for those people out there whose voices have been drowned out by the politics of greed. I thank you all for this amazing award tonight. Let us not take this planet for granted. I do not take tonight for granted. Thank you so very much.

An Iranian film, The Salesman, won for Best Foreign Language film, but the producer, Asghar Farhadi, boycotted the ceremony due to the travel ban and had a statement read by Anousheh Ansari. Really? A man from Iran is lecturing U.S. on dividing the world into us versus our enemies, aggression and war, democracy and human rights?

Ansari: I will be reading a statement from Mr. Farhadi:

'It's a great honor to be receiving this valuable award for the second time. I would like to thank the members of the academy, my crew in Iran, my producer, Amazon and my fellow nominees. I'm sorry I'm not with you tonight. My absence is out of respect for the people of my country and those of other six nations whom have been disrespected by the inhuman law that bans entry of immigrants to the U.S. Dividing the world -- thank you. Dividing the world into the us and our enemies categories creates fear. A deceitful justification for aggression and war. These wars prevent democracy and human rights in countries which have themselves been victims of aggression. Filmmakers can turn their cameras to capture shared human qualities and break stereotypes of various nationalities and religions. They create empathy between us and others. An empathy which we need today more than ever. Thank you on behalf of Mr. Farhadi. Thank you.'

In a performance for one of the nominees for Best Song by the rapper Common, the social justice warrior even worked in a new slam against the NRA – they are “in God’s way.” Also, standing on stage were "ten extraordinary human beings who answered the call to action and are unsung heroes," including Planned Parenthood President Cecile Richards. At the end, he had the audience standing on its feet as he demanded they “stand up for DREAMers.”

Common: On Oscar night this is the dream we tell a land where DREAMers live and freedom dwells, immigrants get the benefits, we put up monuments for the feminists, tell the NRA they in God's way and to the people of Parkland we say sentiments of love for the people of Africa, Haiti, to Puerto Rico.
...these days we dance between love and hate, don't know the date so we stay awake, a knee we take for our soul's sake, new victory off our old faith, a president that trolls with hate he don't control our fate because God is great, when they go low we stay in the heights, I stand for peace, love and women's rights…

Director Spike Lee won his first Oscar for Best Adapted Screenplay for BlacKkKlansman and he took the occasion to really get political. After talking about his ancestors, some of whom were slaves, Lee reminded the audience, "The 2020 presidential election is around the corner" and called on everyone to "be on the right side of history" and "Make the moral choice between love versus hate." He ended with a nod to his 1989 film Do the Right Thing.

Lee: I want to thank Tanya, the word today is irony. The date, the 24th. The month, February, which also happens to be the shortest month of the year. Which also happens to be Black History Month. The year, 2019. The year, 1619. History, herstory. 1619, 2019. 400 years, our ancestors were stolen from Africa and enslaved. They worked the land from morning to night. My grandmothers, who lived 100 years young, a college graduate even though her mother was a slave. My grandmother, who saved 50 years of social security checks to put me through college. She called me Spiky-poo. She put me through film school. NYU!

Before the world tonight I give praise to my ancestors who built our country, along with the genocide of our native people. We all connect with ancestors, to regain our humanity. It will be a powerful moment. The 2020 presidential election is around the corner. [ Applause ] Let's all mobilize, let's all be on the right side of history. Make the moral choice between love versus hate. Let's do the right thing! You know I had to get that in there.

What political shenanigans will the 2020 Oscars bring? Stay tuned to Newsbusters Sunday night to find out!