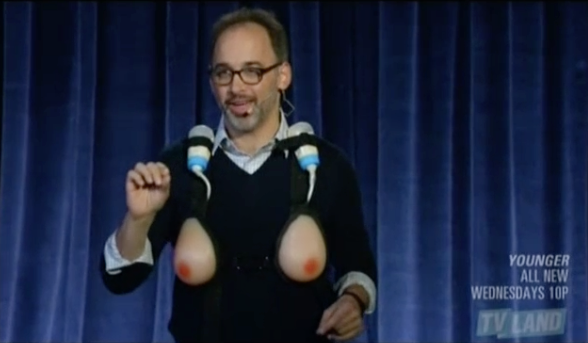 TV Land’s Younger has introduced a radical male feminist character this season that is pretty much the best you’ll ever see on television!

A two-episode story arc on Younger (“Un-Jaded” and “Into the Woods and Out of the Woods”) deals with the bosses at Empirical Press, Charles (Peter Hermann) and Diana (Miriam Shor), trying to land a big deal with Hugh Shirley (David Wain), for his new book “The Male Feminist.” Hugh is every bit as wonderfully ridiculous and over-the-top as you’d expect – and more!

There were just too many amazing parody scenes of the radical male feminist that I had to catalogue them all. In our first glimpse of Hugh, he is giving a lecture wearing a fake bosom and breast-feeding a child – “Ladies and gentlemen, I have never felt more beautiful!” he declares. When he agrees to sign with Empirical he stipulates that he be paid 77 cents on the dollar because “I want to be paid like a woman.”

Diana pitches the idea that he debate “the country's top misogynists,” specifically mentioning Bill O’Reilly and Donald Trump, as a way to promote the book. He also wants to talk to architects because their buildings are too phallic. “The Washington Monument might as well have semen coming out of it,” he says. “Where's the monument for Eleanor Roosevelt that's shaped like a vulva?”

-Diana: Liza. Do I have everything there is on Hugh Shirley?

-Liza: Uh, actually, I just pulled up one of his lectures. It's called "Crushing The Patriarchy From Within." I cued it up for you.

-Hugh: I'm wearing a bosom. Why? Because while a man can never truly know what it's like to be a woman, it doesn't mean he can't try. [Baby crying] And... [Cheers and applause] Ladies and gentlemen, I have never felt more beautiful.

-Diana: Oh, good Lord, what a... Powerful, powerful message-- a message that, if I have my way, will be heard by every man, woman, and post-pubescent child in this country. I am not going to sell this as a book. No, I'm going to sell this as an anthem, a call to action for a new generation. In my mind, "The Male Feminist" is "The Feminine Mystique" for the 21st century. And in Empirical's hands, you'll be nothing less than the new Betty Friedan.

-Hugh: [Gasps] And she would be my point person?

-Hugh: Then I'm interested. On one condition: That we make a deal and then you pay me 77¢ on the dollar for that deal. I want to be paid like a woman, and I want that to be part of the campaign.

-Diana: That is brilliant.

-Charles: I think we can arrange that.

-Hugh: Then let's make a book.

-Diana: Well, obviously we'll book you on all the big shows, but I'd like to do a few events at the 92nd Street Y where you square off with some of the country's top misogynists. You know, like Jon Stewart did with Bill O'Reilly. Actually, Bill O'Reilly might work for this. Maybe Donald Trump.

-Hugh: I'd love that. Also, I'd love to do a reading solely for influential architects. I mean, I look around the cities, and all I see are penises. Empire State Building. The Seattle Space Needle. The Washington Monument might as well have semen coming out of it. Where's the monument for Eleanor Roosevelt that's shaped like a vulva? I want to speak to those people directly.

Not being able to truly know what it’s like to be a woman, Hugh says, “Is the greatest frustration of my life.” He is offended by the notion that men are able to pee standing up and thus be literally above women. “Urinals are the last vestige of a violent power structure,” he declares, but no mention of whether he pees sitting down, which, yes, is actually a feminazi thing.

When Hugh mentions he “wore a tampon for an entire day last week just to know what it felt like” (EWWWWWWW!!!) that is the last straw for revolted a Diana, who has had to kiss his butt the whole time and pretend his ideas are amazing to get the big book deal.

But somehow there is a physical attraction between the two. “You channel this masculine energy, which normally I'd hate, but yours is stoic and brave, yet deeply vulnerable,” Hugh tells Diana.

-Hugh: Are we looking at any mid-Atlantic coverage, or is it just the Northeast?

-Hugh: How about Midwestern college towns? A huge portion of my audience are transgender academics.

-Diana: Absolutely--Ann Arbor, Madison, St. Paul. And there is a huge market for this book in Seattle and Portland-- actually, anywhere in the Pacific Northwest within ten miles of a vegan market.

-Hugh: Great. I'd like to wake up some straight men too. Maybe we could do surprise drop-ins at a VFW hall or strip club here and there. Diana?

-Hugh: Are you okay?

-Diana: Thank you for telling me that.

-Hugh: Have lunch with me tomorrow. I swear I'll make you pay for half.

They end up in bed together, but Hugh asks every two seconds, “Is this okay?” When he is on top he says, “This is feeling too phallo-centric. I feel like I'm dominating you. I want you on top of me.” You think finally that will be the end of it but then he asks, “Do you feel like you have enough agency in this power—” and Diana cuts him off, “No more talking!” The entire affair ends with Diana fracturing his penis – how appropriate!

Hugh Shirley represents male feminism taken to the extreme, but like all good comedy, it’s the elements of truth that make it so funny. But sometimes the comedy is depressing because there’s too much truth to the absurdity. I found discussion of talking to the Department of Education to get “The Male Feminist” into every 3rd grade classroom uncomfortable because I could totally see something like that happening in real life. After all, we already have books like “Heather Has Two Mommies” and transgender propaganda for young children in schools.

But overall, the portrayal of a radical male feminist on Younger is just plain laugh out loud hilarious, and it’s nice to just sit back and relax, get out the popcorn, and watch Hollywood poke fun at the left for a change.

'Younger' airs on TV Land at 10pm eastern on Wednesdays.