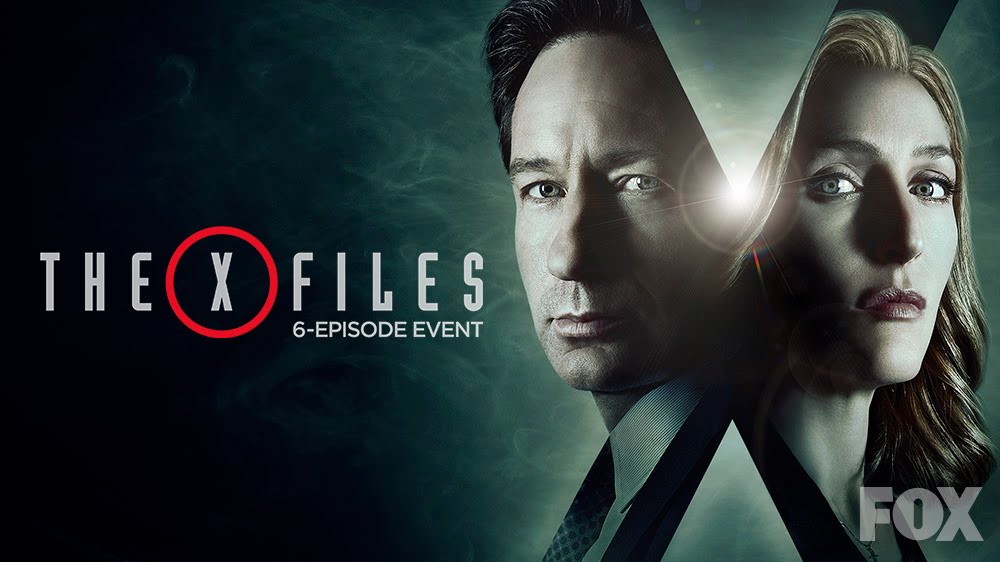 The popular 90's-era science fiction TV show The X-Files is back on prime time with a special 6 episode run. The series, which ran on Fox for 9 seasons between 1993 and 2002 and produced two movies, returned with some new conspiracy theories related to the show’s long quest for the truth about extraterrestrials – as well as a lot of unnecessary politics.

The episode, titled “My Struggle” (possible reference to Hitler’s “Mein Kampf?”), introduces us to Tad O’Malley (Joel McHale), a 9/11 Truther (although the truth involves aliens) and popular online conspiracy theorist based on Infowars’ Alex Jones. O’Malley is the one who brings our heroes Fox Mulder (David Duchovny) and Dana Scully (Gillian Anderson) back together, setting the stage for the umpteenth reopening of the FBI’s X-Files unit and the next 5 episodes.

When we first see Mulder again, he is watching a clip of Jimmy Kimmel interviewing President Obama about Area 51. “My life’s become a punch line,” he grouses. Soon he gets a call from Scully who wants him to check out Tad O’Malley’s show.

O’Malley is shown ranting about the “mainstream liberal media lying to you about life, liberty and your God-given right to bear firearms,” and Mulder quickly condemns him as a jackass. But suddenly, when O’Malley mentions UFOs, Mulder perks right up. (Right, because a belief in aliens is a good measure of someone’s credibility, not their reverence for the Declaration and Constitution.)

-Jimmy Kimmel: If I was the president, the moment I was inaugurated, my hand would still be hot from touching the Bible, (audience laughter) And I would immediately race to, uh, wherever they hold... Have the files about Area 51 and UFOs, and I'd go through everything to find out what happened.
-Obama: The aliens won't let it happen. (Audience laughter)
-Mulder: My life's become a punch line. What's happening out there, Scully?
-Scully: A.D. Skinner's looking for you.
-Mulder: Why doesn't he just call me?
-Scully: He doesn't know how to reach you, Mulder. I barely know how myself.
-Mulder: What does he want, Scully?
-Scully: He wants to know if you've been watching someone called Tad O'Malley on the Net-- apparently, he's reached out to us from the FBI.
-Mulder: Hold on. I'm bringing him up.
-O'Malley: It comes down to this. It's a mainstream liberal media lying to you about life, liberty and your God-given right to bear firearms.
-Mulder: Why would I watch this jackass, Scully?
-O'Malley: 9/11 was a false flag operation. It was a warm-up to World War III. Now, hear me on this. It's all part of a conspiracy dating back to the UFO crash at Roswell...
-Mulder: I thought you were done with UFOs. The stranglehold they put on your very existence, I believe is how you put it.
-Scully: I'm just the messenger, Mulder. Apparently this guy is desperate to meet.

Mulder is skeptical of O’Malley at first. He mocks O’Malley’s bulletproof limo – “Because you never know when a gun-toting liberal might go Hinckley.” And he doesn’t seem to believe that a man with “conservative credentials” could be possibly interested in the truth, only ratings and money. (Yeah, even in The X-Files’ world, where the existence of extraterrestrials is “the truth,” conservatives are shown to be disingenuous opportunists.)

O’Malley is finally able to begin endearing himself to Mulder by dissing Bill O’Reilly.

-Mulder: And how does a man with your conservative credentials count himself a believer in UFOs and 9/11 false flag conspiracies?
-O'Malley: I take it you think my message is disingenuous.
-Mulder: Conspiracy sells-- it pays for bulletproof limousines.
-O'Malley: You think I do it for the ratings?
-Mulder: I think you're The O'Reilly Factor with a shopworn little gimmick.
-O'Malley: What Bill O'Reilly knows about the truth could fill an eyedropper.

Soon Mulder goes from calling O’Malley a “jackass” to a “Godsend” as the two think they’ve uncovered a plot for world domination decades in the making, from the Tuskegee experiments to the War in Iraq. During this scene we are shown a Saddam statue taken down, the lefty favorite "Mission Accomplished" sign, images of Bush, waterboarding, etc. Oddly enough, no footage of Obama, and drones are conspicuously absent.

-Sveta: Why do such a thing and lie about it-- our own government?
-Mulder: Your own government lies as a matter of course, as a matter of policy-- the Tuskegee experiments on black men in the '30s; Henrietta Lacks.
-Sveta: What are they trying to do?
-Mulder: That's the missing piece.
-O'Malley: But it's not hard to imagine-- a government hiding, hoarding... Alien technology for 70 years, at the expense of human life and the future of the planet. Driven not only by corporate greed, but... A darker objective.
-Mulder: The takeover of America.
-O'Malley: And then the world itself, by any means necessary, however violent... Or cruel... Or efficient. By severe drought brought on by weather wars conducted secretly using aerial contaminants and high-altitude electromagnetic waves, in a state of perpetual war to create problem-reaction- solution scenarios to distract, enrage and enslave American citizens at home with tools like the Patriot Act and the National Defense Authorization Act, which abridged the Constitution in the name of national security. The militarization of police forces in cities across the U.S. The building of prison camps by the Federal Emergency Management Agency with no stated purpose. The corporate takeover of food and agriculture, pharmaceuticals and health care, even the military, in clandestine agendas, to fatten, dull, sicken and control a populace already consumed by consumerism...
-Bush: And I encourage you all to go shopping more...
-O'Malley: A government that taps your phone, collects your data and monitors your whereabouts with impunity. A government preparing to use that data against you when it strikes and the final takeover begins.
-Scully: The takeover of America.
-O'Malley: By a well-oiled and well-armed multinational group of elites that will cull, kill and subjugate.

Entertainment Weekly interviewed X-Files creator Chris Carter about the show’s politics ahead of its return:

When we suggest the show is embracing “right-wing” theories, Carter counters, “It’s not necessarily. I don’t see Alex Jones as right-wing, I see him as libertarian … [and O’Malley is] a character who casts everything in doubt.”

The thing is, while the MSM sees the show’s conspiracies as right-wing, the mentions about “oil companies making trillions,” “corporate greed,” and “a state of perpetual war” in the episode are heard far more commonly from the left.

And just look at how our last two presidents are portrayed. Obama is seen in a light-hearted Jimmy Kimmel clip, while Bush is shown twice during the monologue that details how elites are using the government to take over the country and the world.

It is a disappointing turn for a show that was popular across political lines and never seemed to have to resort to the kind of political name-dropping and references seen in this episode. Part of the beauty of The X-Files was that it was evergreen but this new iteration feels like a bit too contemporary and self-aware, in a bad way. Taking cheap shots at O’Reilly, Bush, and conservatives is pretty much the laziest route you can take as a Hollywood writer. I expect much better from this series.