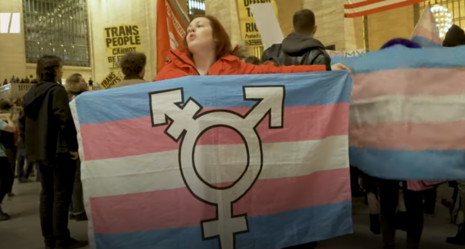 It seems to be the case, especially now, that leftists have to be told about the First Amendment right to freedom of speech repeatedly because they seem to like to trample all over it every day. The coddling that many young people experience both at home and in school is seeping out into the real world by convincing people that they have a right not to be offended. It's especially true with GLAAD’s newest campaign to force YouTube to create policies that will prohibit the “misgendering” of transvestites.

The Gay & Lesbian Alliance Against Defamation (GLAAD) has partnered with 19 other organizations including Free Press (ironic isn’t it), Equality Federation and the Gender Equity Policy Institute to call on YouTube to “ban targeted deadnaming and misgendering of trans people" -- otherwise known as yet another targeted attack on our constitutional rights.

20 organizations call on Yo... by Brennan Suen

If this were 20 years ago, no one would be on board with proposing limitations to what citizens are allowed to say as long as they're not making a call to violent action. Thanks to Big Tech platforms like Facebook, Twitter and YouTube, people think that censoring others is a perfectly normal thing despite the absurd biases that are present.

The letter from the 20 organizations was addressed to Susan Wojcicki the CEO of YouTube and opens by demonizing those who believe in biology (Note: the full letter can be seen above):

Transgender people are subject to alarming rates of hate and harassment online, which can result in frightening real-life consequences and YouTube has provided a platform for this bigotry. In particular, it has created a space in which creators can deliberately misgender and deadname trans people without repercussion. These actions are forms of harassment that involve using a trans person’s former name or incorrect pronouns. YouTube should implement and enforce policies to prevent and mitigate targeted harassment.

The organizations then “demand” that the platform create a “safer place” for transgender individuals and specifically mention Ben Shapiro and Matt Walsh, whom they claim “demean trans people” for addressing them by their biological sex.

YouTube’s hate speech policy states that the platform will “remove content promoting violence or hatred against individuals or groups” based on attributes like “sexual orientation, gender identity and expression, religion and sex or gender.” Therefore, if one’s religion doesn't agree with transgenderism then why should that person be banned from using pronouns that respect biology?

Still, the organizations claim that YouTube has “failed to enforce these policies," even though the platform removed two “anti-trans videos” from PragerU’s "The Candace Owens Show" in November for truthful statements about how being trans is a mental illness.

GLAAD’s Social Media Safety Index is “the first-ever baseline evaluation of the LGBTQ user safety experience across the social media landscape," which is actually just a document designed to prevent LGBT people from getting offended on social media. It also calls on YouTube and other platforms “to follow the lead of Twitter’s Policy on Hateful Conduct, which includes a specific prohibition against misgendering and deadnaming.”