One small step for women, one giant hurdle for women’s sports. Transgender track star CeCe Telfer was just deemed ineligible to participate in the United States Olympic trials as a woman due to his testosterone levels being too high. Of course, any real doctor that doesn’t feed into the woke mob mentality will tell you that it’s impossible for a man to become a woman just because they lower their testosterone levels. 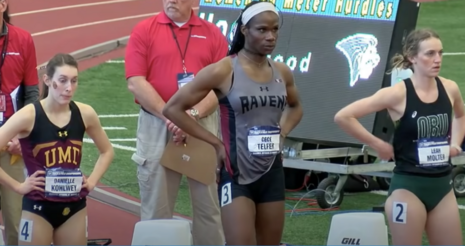 Men produce nearly 20 times more testosterone than women, and there are obvious strength differences between the two genders. Telfer learned how to use this to his advantage. The ‘star’ ran for the Franklin Pierce University men’s track and field team. He also placed in the top 200 in the 400m hurdles in the NCAA Division II men’s division in 2016 and placed 390th in 2017. After these accomplishments he realized that he was actually a woman.

Is it a coincidence that after falling 190 positions from 2016 to 2017 he decided to transition and compete against women instead? I think not. In 2019, Telfer became the first man to win an NCAA title in the women’s 400m hurdles.

Telfer’s manager, David McFarland, told the Clown News Network that he is the “model of grace in the face of adversity” and “will respect USA Track & Field's decision on her eligibility to compete at the US Olympic Trials this Friday in Eugene.” As if he really has a choice?

"CeCe has turned her focus towards the future and is continuing to train. She will compete on the national -- and world -- stage again soon," McFarland concluded.

He’s going to have to take some serious hormones if that’s going to happen. The Olympic guidelines already allow for transgenders to have nearly 5 times the amount of testosterone that women normally have, which is already unfair to begin with. That's the leftist viewpoint for ya.

The USA’s Track and Field team released a statement saying:

If that’s the case why don’t we just allow the women competing against Telfer to take steroids up until a year before the competition. That seems only fair.

The USATF also stated that they “strongly support inclusivity and providing a clear path to participation in the sport for all, while also maintaining competitive fairness.” Looking at those numbers I’m not sure where the fairness comes in.

Finally, women are seeing some progress on this front, but there are still many hurdles to go.