NBC News Cheers on Gay Marriage Ruling: Will 'Go Down in the Record Books' with Brown

On June 26, following the Supreme Court’s decision to grant a constitutional right to marry for gay couples, NBC News Special Report broke in to cheer on the ruling. NBC's Supreme Court correspondent, Pete Williams, labeled it a historic ruling and fought back tears while reporting the 5-4 decision to Savannah Guthrie.

The co-anchor of The Today Show claimed the ruling “has potential to go down in the record books” with “the significance of something like Brown versus Board of Education.” Later in the segment, Chuck Todd and Matt Lauer agreed that this ruling is another “big victory for the administration.”

CBS's coverage of the ruling was right in line with the angle taken by NBC. Charlie Rose, host of CBS This Morning assumed that the decision will be placed in the same category as Brown due to "its profound impact on people in America."

PETE WILLIAMS: Historic ruling here. For the first time, the Supreme Court has said there is a constitutional right – excuse me, to same-sex marriage. You can hear the cheer in the crowd, a very dramatic moment. A 5-4 decision written by Justice Anthony Kennedy. This is a total victory for the advocates of same-sex marriage. The Court had considered a fallback in case it didn't go this far, that states would at least have to recognize same-sex marriages were performed in other states. But the court 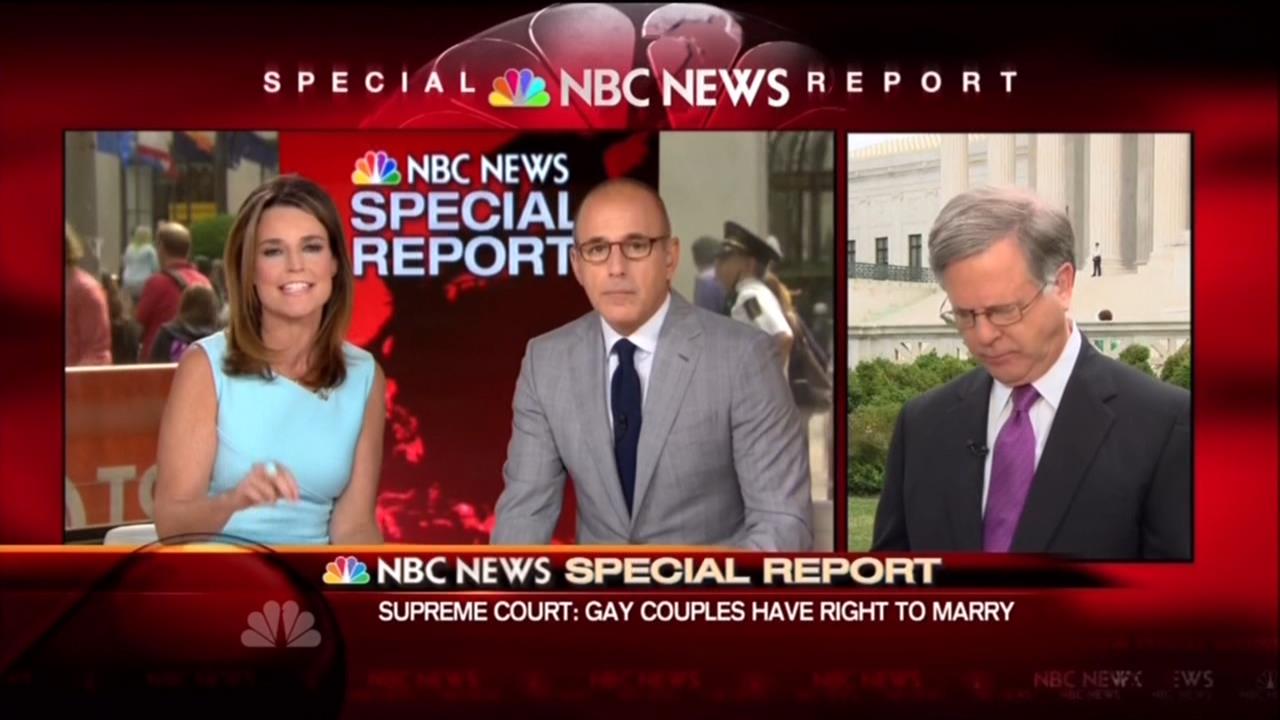 SAVANNAH GUTHRIE: As you mention, actually I think there are three major same-sex gay rights precedents in this Court. Two of them were decided on June 26th. And so now we have another one. A potential to go down in the record books, something with the significance of something like Brown versus Board of Education. But Pete, you mentioned it wasn't a surprise. On the other hand, as recently as two years ago the Court had the chance to make a ruling in a companion case and didn't do so. What changed so quickly?

CHUCK TODD: It is a big victory for the administration. It's going to, what will be interesting to watch is what is going to be the fallout, particularly among many Republicans and many conservatives –  in particular evangelicals – that have been fighting this state by state through the years as well as in the Supreme Court. Where are they going to come down?