The June 10 edition of The Last Word featured all the predictable elements of a liberal media discussion on abortion. Host Lawrence O’Donnell invited Planned Parenthood president Cecile Richards, former Democratic congressman Barney Frank, and Jeremy Peters of the New York Times to the program to bash the Republican “war on women.” The discussion concerned a proposed 20-week abortion ban that’s currently stuck in the Senate.

Cecile Richards noted that, because more and more states have been enacting restrictions on abortion, “it’s no longer a theoretical war on women. It is an actual war on women.” Earlier in the segment, Richards noted that Republicans have “an obsession” with abortion – as if liberals don’t – and claimed that the 2012 Republican presidential primaries were a “race to the bottom on women.” All of these statements went uncontested by the other panelists on the program. In fact, both Peters and Frank hit the Republican presidential candidates on the issue. Peters questioned the strategy to highlight abortion, and Frank worried that Roe v. Wade would be overturned.

Frank, now an MSNBC contributor, warned Democrats to “take this abortion thing very seriously” because of the right-wing pressures that will be present in the 2016 Republican primaries. He stated his concern for the future of Roe v. Wade:

While a little more level headed than Frank and Richards, Jeremy Peters could not understand the focus on abortion from the Republican senators, especially those running for president:

I find it curious as a political strategy because all of the presidential candidates who are in the Senate, Lindsey Graham, Ted Cruz, Rand Paul, Marco Rubio, they’re all co-sponsors of this bill. So it’s not really a way for them to differentiate themselves.

Frank disagreed with Peters’ assertion and made the case that any of the Republicans could claim to “be the real leader” on the issue.  He thought that “being the most ardent advocate or [being] the most effective” at making a case against abortion would allow the senators to continue their efforts to limit the procedure.

One would think O'Donnell and The Last Word could provide a little bit of balance to their coverage of abortion. Instead, the three panelists had free reign to attack conservative efforts to limit abortion.

LAWRENCE O’DONNELL: Joining us now New York Times political reporter and MSNBC political analyst Jeremy Peters, the president of Planned Parenthood Cecile Richards, and former congressman and MSNBC contributor Barney Frank, author of Frank, a Life in Politics. Cecile, there is Lindsey Graham saying I can’t promise you it will get to 60 votes which is another way of saying this is a stunt, I’m gonna use the Senate floor because I can. The procedure allows me to go out there when I want to – in this case when convenient for my campaign – with no hope of what he’s doing becoming law.

CECILE RICHARDS: Correct. And of course, this is – we have already had 29 actions by this Congress to try to limit abortion. It's an obsession. And for Lindsey Graham, this is his effort to pander to the part of – the wing of his party that he needs in order to, I guess, be competitive. But it is really a shame that we are – continue to be preoccupied by this issue. That’s not what the voters want, it’s not what even the Republican Party wants.

O’DONNELL: Barney Frank, the priority of the Senate apparently is gonna be whatever this week’s 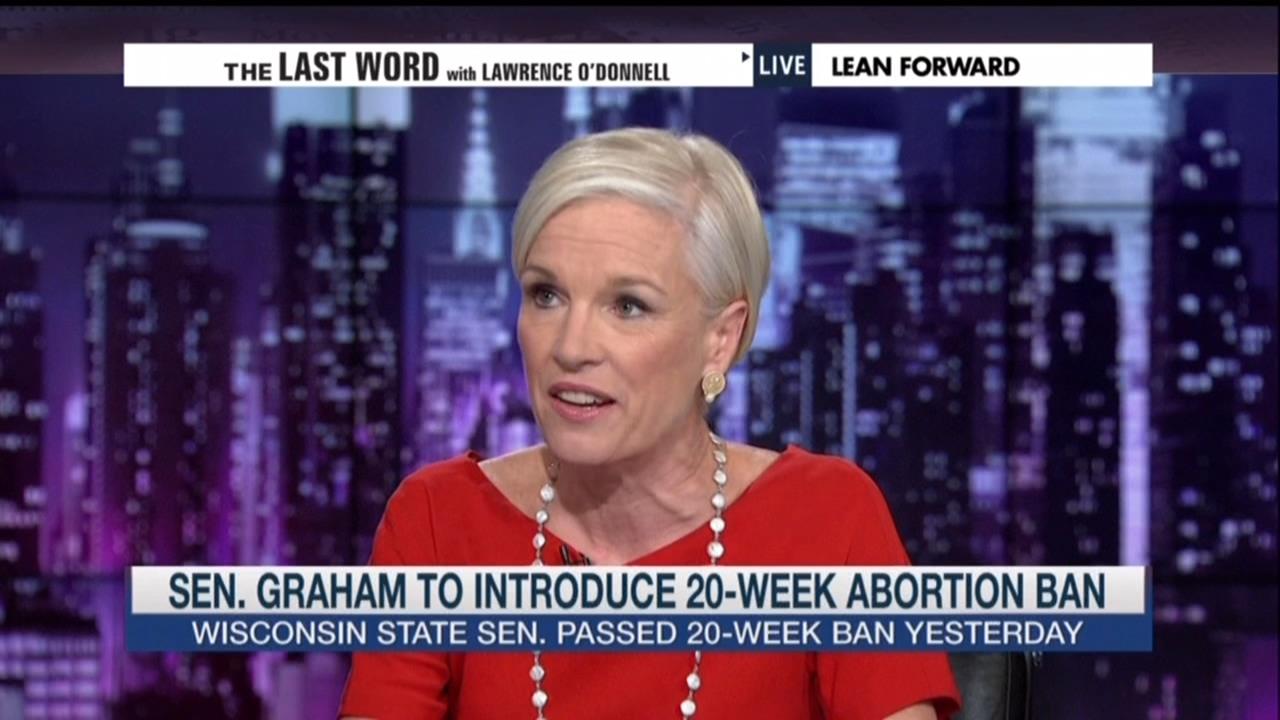 presidential candidate in the Senate decides to make it.

BARNEY FRANK, former Democratic Congressman: That's true. But I think we are getting some indication of what the 2016 election will be about. It’s already clear that it will mean, if they win, an end to any effort to deal with climate change or do any serious financial regulation. I think people should take this abortion thing very seriously. The Supreme Court and many of the lower courts have been edging closer to a – the tension of abortion restrictions. I think it is very clear, with Lindsey Graham raising this, with the pressures that generates among the Republican primary electorate, I think it’s pretty clear that if you get a Republican president elected in 2016, given the age and the disposition of the Supreme Court justices, Roe vs. Wade will be overturned. I don't think there is any question that if a Republican president wins we will see the end of Roe v. Wade.

O’DONNELL: Jeremy Peters, is that what we’re gonna hear from Republicans candidates next week, promises to select Supreme Court justices who will overturn Roe vs. Wade?

JEREMY PETERS, New York Times: You know, this is always a question that comes in every presidential election. I think there is a certain wariness among Republicans to get too deep into the weeds this issue. I have to say, I find it curious as a political strategy because all of the presidential candidates who are in the Senate, Lindsey Graham, Ted Cruz, Rand Paul, Marco Rubio, they’re all co-sponsors of this bill. So it’s not really a way for them to differentiate themselves.

BARNEY FRANK: I don't think you’re gonna see the wariness. Things are changing. And this is not the Republican nominating process even of eight years ago, or even four. The right-wing pressures, I think, are intensifying. And I think you’re gonna see whatever that wariness is you just noticed, all four of them are sponsors of this bill, they’ll all be sponsors of it. In addition, just because other people are for it doesn't mean you can’t make it an issue. You could be the one who is the most effective. You can claim that I'm the real leader on this. So, the fact they are all together on the issue in substance doesn't mean they won't try to make it a basis for differentiating among them depending on who was the most ardent advocate or the most effective.

O’DONNELL: Cecile, to Barney's point, it may have no legislative impact on the Senate floor, but it should, in Barney's view, be taken as a promise. This is what a Republican presidency will try to bring you.

RICHARDS: Absolutely, I don't disagree at all. In fact, what we are seeing this year is a repeat of what we saw in the last presidential Republican primary where it was a race to the bottom on women. It resulted in the largest gender gap ever in the history of Gallup polling in a presidential race. And that was because we had a Republican primary that everyone pledged to overturn Roe v. Wade,  defund Planned Parenthood. I think the difference this time, why this is so serious, is we’re actually now seeing in states like the state of Texas that have enacted these kind of draconian measures, the impact on women. So it’s no longer a theoretical war on women. It is an actual war on women