New York Times reporter Trip Gabriel discovered "What's the Matter With Kansas?", and his name is Kris Kobach, Kansas's worryingly activist and conservative secretary of state: "He Pushed Kansas to the Right. Now Kansas Is Pushing Back." Kobach is locked in a tough re-election race, and the Times smells blood in the water.

Gabriel observed that while the Kansas secretary of state is normally "a no-drama job," "as Supreme Court rulings reignite a national debate over voter ID and fraud, no candidate more defines this moment of politicized voting rules than Secretary of State Kris W. Kobach, who has transformed an obscure office in a place far from the usual political battlegrounds, to become a lightning rod on restrictive voting and illegal immigration."

Mr. Kobach has been a major conservative voice on voter issues for years. He has helped states write strict laws requiring proof of citizenship, presided over the “Kansas project” -- a national hunt for double registrations -- and, most recently, tried to keep a Democratic candidate on the ballot with the potential to help Kansas’ endangered Republican senator, Pat Roberts. 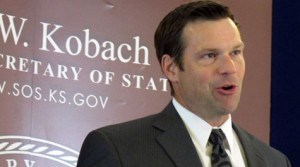 An itinerant firebrand with a Yale law degree, baptized a “blood brother” by the heavy metal conservative Ted Nugent, Mr. Kobach was elected by a 22-point landslide in 2010.

Now he faces an unexpectedly tough re-election fight in deeply Republican Kansas, where many think the party may have gone too far. It is the same wave threatening to swamp Gov. Sam Brownback.

“They moved too far to the right,” said Marc White, a lawyer who came to a candidates’ forum last week in Topeka, the state capital, where Mr. Kobach spoke. “We’re a Republican state, don’t get me wrong. But you’re going to have a backlash to the more extreme policies.”

Mr. White described trying to help a man in his 40s caught in limbo by Kansas’ tough new voting law written by Mr. Kobach, which requires voters registering for the first time to document they are citizens. “This individual was born at home in Mississippi and is having a very difficult time obtaining records that would allow him to register,” Mr. White said.

Gabriel followed a long line of Times reporters insisting vote fraud is not a problem, evidence to the contrary.

Mr. Kobach has had an outsize influence in states as far-flung as Arizona and Alabama by raising alarms about illegal immigrants stealing elections, a claim without substance, but which, critics say, has led to policies that depress turnout by groups inclined to vote Democratic.

Since his Kansas restrictions took effect last year, fully 16 percent of people seeking to register for the first time -- currently more than 22,000 people -- have had their applications delayed because they have not produced proof of citizenship, according to Mr. Kobach’s office.

Gabriel employed left-wing lingo to make his case against Kobach.

Voting regulations are Mr. Kobach’s latest cause. But he was a national hero to conservatives -- and a whipping boy for the left -- well before his election four years ago, when he advised states on immigration restrictions, including Arizona’s “show me your papers” provision, which was upheld by the Supreme Court.

Although studies repeatedly show voter fraud of the type Mr. Kobach targets to be extremely rare, he has not toned down his message. “We have had many, many cases of noncitizens registered to vote prior to our new law,” he said.

Democrats argue that many restrictions enacted to fight allegations of fraud end up suppressing voter turnout. Last week, the Government Accountability Office, a nonpartisan congressional research arm, reported that turnout in Kansas had declined 1.9 percent because of its ID law, especially among blacks and young voters.

Despite his record as a fire-breather, he has an even-keeled, somewhat nerdy disposition. Asked if he could be collateral damage in the anti-Brownback wave this year, he said, “It’s an interesting question, as a former academic who likes to study these things.”

Gabriel scouted around for a rationale on why Kobach would lose his job, though he's running even with his opponent, Republican-turned-Democrat Jean Schodorf, with the election still two weeks away.

If Mr. Kobach loses his job, said Burdett A. Loomis, a University of Kansas political scientist, it will be because of perceptions he has overly politicized his office. “That’s how Democrats win in a state like Kansas,” he said.