Self-impressed liberal New York Times columnist Paul "I have been right about everything" Krugman nabbed the cover story in the latest issue of Rolling Stone, devoting over 4,000 words to an essay "In Defense of Obama." Yes, despite all current dangers foreign, domestic, and coming in from overseas, Obama's presidency is soaring and things would be even better if not for "scorched-earth" Republican obstructionism.

Krugman detailed all the policy areas where Obama was knocking it out of the park, emerging "as one of the most consequential and, yes, successful presidents in American history," with the exception of foreign policy, where Krugman faulted him for failing to prosecute the "war crimes" of the Bush regime.

When Krugman appeared on ABC's "This Week" Sunday to discuss his article in a taped inteview with Jonathan Karl, he ranked Obama as a more consequential president than Ronald Reagan: "In the end, Reagan did not leave the structure of American society particularly different. He did not, in fact, change the basic legacy of Lyndon Johnson and FDR. I think if my ranking of consequential presidents, at least in modern history, would probably be FDR, LBJ, Obama and then Reagan."

Krugman begins his Rolling Stone piece with his usual self-fascination: 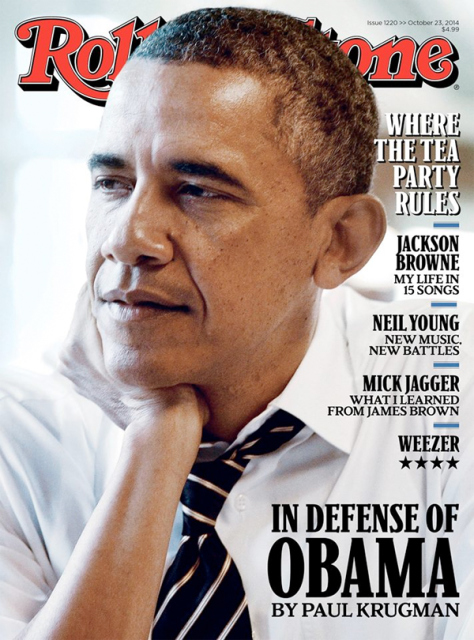 When it comes to Barack Obama, I've always been out of sync. Back in 2008, when many liberals were wildly enthusiastic about his candidacy and his press was strongly favorable, I was skeptical. I worried that he was naive, that his talk about transcending the political divide was a dangerous illusion given the unyielding extremism of the modern American right. Furthermore, it seemed clear to me that, far from being the transformational figure his supporters imagined, he was rather conventional-minded: Even before taking office, he showed signs of paying far too much attention to what some of us would later take to calling Very Serious People, people who regarded cutting budget deficits and a willingness to slash Social Security as the very essence of political virtue.

But now the shoe is on the other foot: Obama faces trash talk left, right and center – literally – and doesn't deserve it. Despite bitter opposition, despite having come close to self-inflicted disaster, Obama has emerged as one of the most consequential and, yes, successful presidents in American history....

I'll go through those achievements shortly. First, however, let's take a moment to talk about the current wave of Obama-bashing. All Obama-bashing can be divided into three types. One, a constant of his time in office, is the onslaught from the right, which has never stopped portraying him as an Islamic atheist Marxist Kenyan. Nothing has changed on that front, and nothing will.

Krugman lamely excused Obama's basement-level approval rating, arguing that ratings "don't mean the same thing that it used to" due to partisanship, and that "the public is negative on politicians in general, and so on." (The "and so on" is the real argument clincher).

Krugman argued Obama's "achievements look likely to endure" and went down the list beginning with ObamaCare, which survived due to an attack of "conscience" by Chief Justice John Roberts.

Still, Obamacare means a huge improvement in the quality of life for tens of millions of Americans -- not just better care, but greater financial security. And even those who were already insured have gained both security and freedom, because they now have a guarantee of coverage if they lose or change jobs.

Krugman must have missed the tens of thousands of Americans who continue to suffer having their health insurance cancelled. Then again, Krugman is willfully blind to the grievous flaws in government-controlled health care. (James Taranto at the Wall Street Journal is fond of quoting Krugman's infamous see-no-evil statement on Great Britain's National Health Service: "In Britain, the government itself runs the hospitals and employs the doctors. We've all heard scare stories about how that works in practice; these stories are false.")

The Times columnist remained starry-eyed over Obamacare. "...health reform is looking like a major policy success story. It's a program that is coming in ahead of schedule -- and below budget -- costing less, and doing more to reduce overall health costs than even its supporters predicted. Of course, this success story makes nonsense of right-wing predictions of catastrophe. Beyond that, the good news on health costs refutes conservative orthodoxy.... 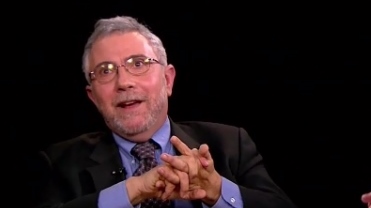 He reached back to defend the president's controversial stimulus package, while bashing Republicans for crippling it and crediting Obama for sticking it to the rich: "....couldn't the U.S. economy have done a lot better? Of course. The original stimulus should have been both bigger and longer. And after Republicans won the House in 2010, U.S. policy took a sharp turn in the wrong direction. Not only did the stimulus fade out, but sequestration led to further steep cuts in federal spending, exactly the wrong thing to do in a still-depressed economy....While America remains an incredibly unequal society, and we haven't seen anything like the New Deal's efforts to narrow income gaps, Obama has done more to limit inequality than he gets credit for....When conservatives accuse Obama of redistributing income, they're not completely wrong -- and liberals should give him credit.

In a rare denial of infallibility, Krugman said he had "no special expertise" in foreign affairs, but nonetheless knows that the equivalent of "war crimes" were committed in the run-up to the war in Iraq during the Bush administration.

Could and should he have been different? The truth is that I have no special expertise here; as an ordinary concerned citizen, I worry about the precedent of allowing what amount to war crimes to go not just unpunished but uninvestigated, even while appreciating that a modern version of the 1970s Church committee hearings on CIA abuses might well have been a political disaster, and undermined the policy achievements I've tried to highlight....