Gracing the cover of August’s Bloomberg Businessweek was a smiling, daisy-garlanded head of a billionaire tycoon that suggested he is a “feminist icon.”

That tycoon was the “Oracle of Omaha” and CEO of Berkshire Hathaway himself: Warren Buffett, a huge donor to birth control, and the abortion industry through his Susan Thompson Buffett Foundation.

The magazine devoted a four-page spread to the story of “how the billionaire’s family secretly funded a revolution in birth control.” But that isn’t all he has funded. Buffett has given more than $1 billion to abortion providers, including Planned Parenthood which is currently embroiled in scandal due to a series of shocking undercover videos. Bloomberg Businessweek complete ignored that scandal and barely touched on the extent of Buffett’s support for the group. 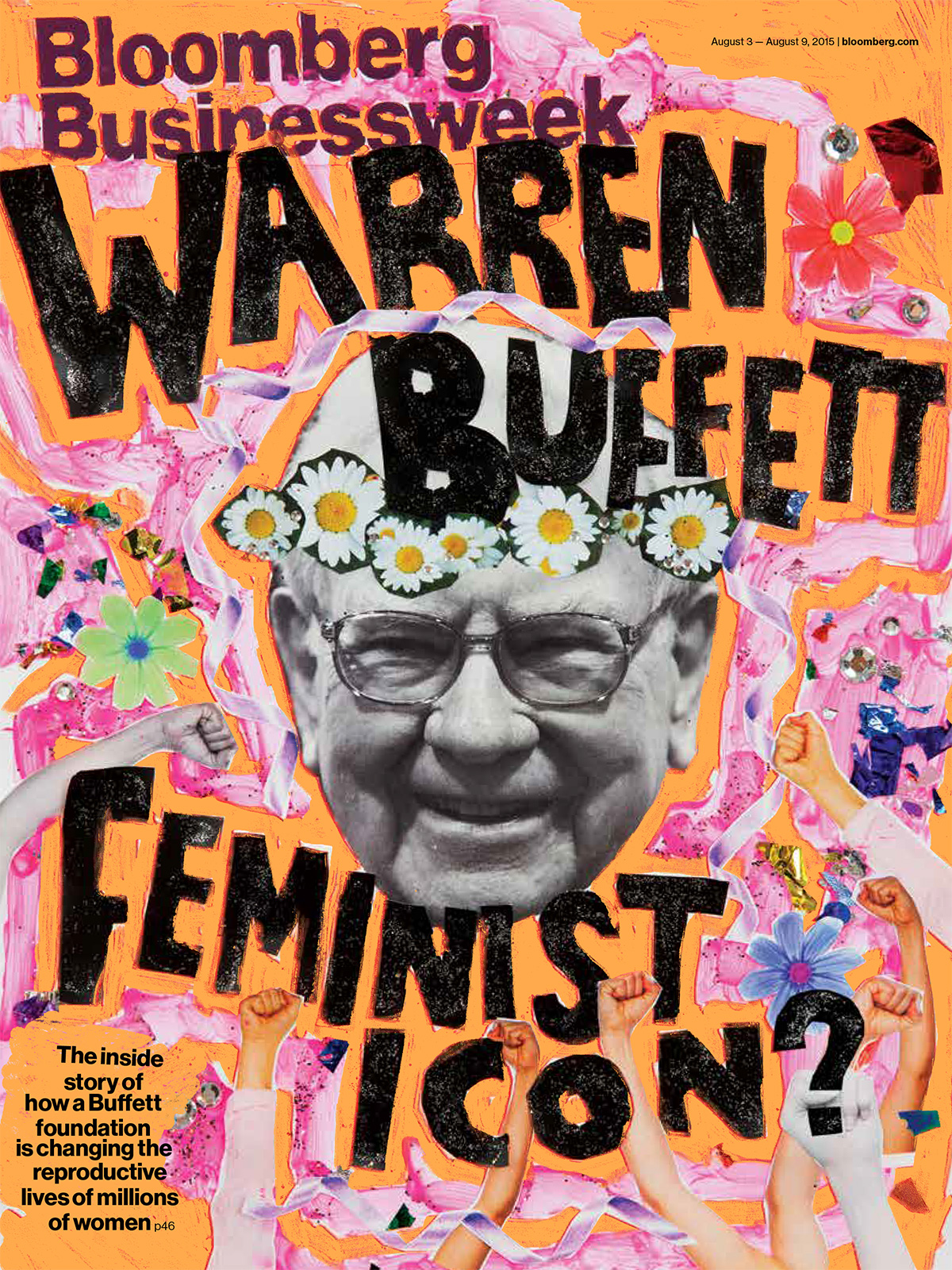 The business magazine focused positively on Buffett’s funding of intra-uterine device (IUD) research, enabling “the biggest shift in birth control in a generation.”

The story briefly mentioned that Buffet’s foundation, created in the 1960s, focused on “reproductive health, including helping to fund Planned Parenthood as well as the development of RU-486, the so-called abortion pill.” It isn’t a “so-called abortion pill,” it really is one. Even Planned Parenthood, which offers it as an option for “medication abortion” to women, admits that.

That was the sole mention of Planned Parenthood, the largest abortion provider in the U.S., in the lengthy cover story by Karen Weise. While glossing over Buffett’s spending on abortion itself, Weise pointed out that “anti-abortion activists” had a huge problem with Buffett and even organized a boycott of Pampered Chef after Berkshire Hathaway acquired it in 2002.

No small oversight, since between 2001 and 2013, the Buffett foundation’s abortion-related donations totaled more than $1.3 billion dollars. Planned Parenthood received $352 million of it.

Late in the magazine article, on the third page, Weise admitted “As the foundation’s spending grew, so did its focus. Earlier, it had concentrated on abortion-related work. Its new spending would expand to include at least $200 million to avoid abortion by building the research, policy, and commercial foundations to promote the rise of IUDs.”

Buffett is proud of this work. Weise quoted Judith DeSarno, the Buffett Foundation’s former director for domestic programs, who said, “For Warren, it’s economic. He thinks that unless women can control their fertility—and that it’s basically their right to control their fertility—that you are sort of wasting more than half of the brainpower in the United States.”

But Buffett has tried to keep some of his funding quiet. Beneficiaries of funding have been instructed to keep mum, according to Bloomberg Businessweek. Dr. Jeffrey Peipert,  Washington University in St. Louis researcher told Bloomberg that he couldn’t “discuss his benefactor.” But proof that it was Buffett’s foundation funding Peipert’s IUD research could be found in The New England Journal of Medicine, the magazine explained.

Peipert claimed, “We were told in all correspondence and all journal articles, we would list them as the anonymous foundation. I’m sure they have good reasons for this, and it probably has to deal with the other things they fund.” Those other things included “abortion-related work,” according to Weise’s story.

The article not only didn’t criticize Buffett’s funding of abortion, it barely acknowledged Buffett’s Planned Parenthood connection. And it completely ignored the scandalous videos about the abortion provider. In recent weeks, a series of grisly videos have been released by the Center for Medical Progress showing Planned Parenthood employees laughing as they sort “5-Star” body parts from aborted babies to sell those organs and haggling over the price for baby body parts.

Many media outlets have also refused to cover the scandal and in the past the media have refused to explicitly address the extent of Buffett’s funding of the abortion industry.

The August issue of Bloomberg Businesweek also showed rank hypocrisy on the subject of children. In addition to its laudatory cover story on Buffett who is actively funding birth control and abortion, another story complained that the U.S. “fertility rate remains too low to keep the population stable” and argued immigration is the “solution to a shrinking, aging U.S. population.”

That article by Charles Kenny showed the pictures of 57 babies. Almost enough to depict one child for every million children aborted in the U.S. since Roe vs. Wade made abortion legal. The U.S. abortion clock showed that more than 58 million unborn children have been aborted.