The month before the hotly contested presidential election, ABC World News Tonight spent so little time on the U.S. economy — it devoted more time “cheering for” a 101 year-old cheerleader.

Polls in October once again showed Americans ranked the economy as their top concern. The economy has led those rankings since July. Yet, the Tennessee State University cheerleader was took priority on ABC’s World News Tonight.

In just a day, World News Tonight spent more time covering the elderly cheerleader than the state of the U.S. economy in the entire month of October. ABC spent only 39 seconds on the economy, but spent 85 seconds covering the 101 year-old.

ABC made 101 year-old Burnece Brunson its “person of the week” on Oct. 21. Anchor David Muir hyped her 82-year cheering streak, saying that she proved “what it truly means to be forever young.”

At the end of his report, Muir told Brunson “tonight, we’re cheering for you.” The economic coverage that ABC did provide consisted of a tweet from Donald Trump and a clip of Hillary Clinton insulting Bernie Sanders’ millennial supporters.

Feel-good stories are common practice for broadcast news, but with all eyes on the presidential election and voters’ expressing concerns over the U.S. economy World News Tonight had a responsibility to its viewers to provide far more economic coverage. 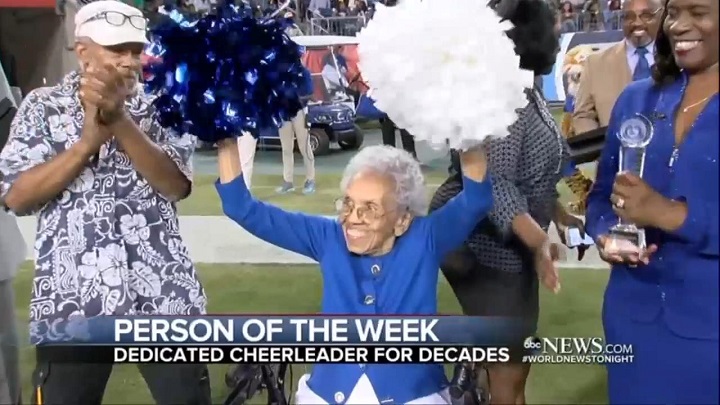 October marked the fourth month in a row, in which ABC’s World News Tonight barely covered the state of the U.S. economy but found time to cover less important issues. Gallup reported on Oct. 14, that the economy topped Americans’ concerns and outranked several other issues like race relations and immigration.