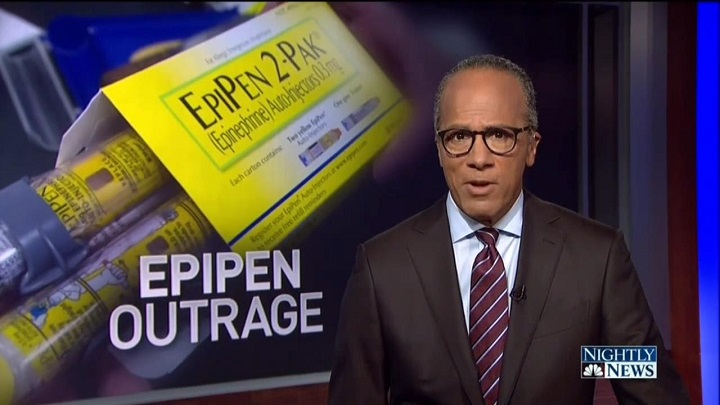 Networks vilified a drug company and its CEO for the high price of life-saving allergy medicine, all while ignoring government actions which enabled the company’s monopoly, contributed to rising costs and increased demand.

“It’s wrong when drug companies put profits ahead of patients,” Clinton said before calling for more regulation of companies like Mylan, which donated up to $250,000 to her foundation.

However, there was much more to the story, including the fact that the Food and Drug Administration (FDA) blocked at least two EpiPen alternatives from reaching the market — essentially allowing Mylan to maintain a monopoly. That information, as well as other government actions that incentivized price hikes and increased demand for EpiPens, was missing from the vast majority of network coverage.

Between Aug. 1, to Aug. 29, network evening news shows hyped Mylan’s “skyrocketing price hike” and “ever growing outrage” toward the company. ABC, CBS and NBC reported on the “unpopular” CEO’s “massive” compensation in six of 15 stories on EpiPens. But 93 percent (14 out of 15) of stories ignored government actions that fostered the company’s monopoly. Only CBS referenced regulation at all when it reported on Aug. 25, that the FDA blocked a generic form of the EpiPen from reaching the market.

NBC Nightly News attacked Mylan the most, and suggested on Aug. 24 that the company endangered children’s lives for the sake of profits.

Speaking in front of a graphic that read “EPIPEN OUTRAGE,” anchor Lester Holt described the “growing anger” toward Mylan “for raising the price of a life-saving medication.” Just after Holt said that children could die without an EpiPen, he reported on Bresch’s $19 million salary.

While NBC only showed part of a Mylan press statement that night, it included two politicians’ attacks on the company’s integrity.

Following backlash from the media and Clinton, Mylan offered steep rebates for EpiPen and announced it would launch a generic product at less than half the cost.

Because networks failed to cover regulations which helped Mylan maintain a monopoly, viewers might have thought EpiPen prices solely resulted from the free market run amok.

“With the FDA, patents, and cozy insurance relationships, Mylan has been able to steadily increase the price of EpiPens without significant market repercussions,” Newman wrote.

Newman explained that the FDA blocked a generic form of the EpiPen from Teva Pharmaceuticals in 2016 citing “major deficiencies.” Reuters reported the FDA also blocked an epinephrine product from Adamis Pharmaceutical Corporation, rejecting it a second time in June 2016.

ABC World News complained about there being “no real competition on the market” on Aug. 21, but left viewers in the dark regarding the federal agency’s actions.

Only one network story, from CBS Evening News, mentioned the FDA’s role in the market. Correspondent Vinita Nair told viewers on Aug. 25, that the FDA blocked a generic version of the drug. Both NBC Nightly News and ABC World News Tonight failed to mention that.

ABC reported three nights in a row (Aug. 21, 22 and 23) that Mylan complained about higher deductible policies impacting consumers, but none of those reports made a connection made a connection to the Affordable Care Act (Obamacare). Reliance on higher deductible plans are one consequence of Obamacare’s implementation, according to Bloomberg View.

None of the networks mentioned the several other federal regulations that contributed to allergy-sufferers’ crisis. Even after Mylan blamed the Affordable Care Act (ACA) for higher expenses, none of the evening news shows reported on how the president’s signature health law impacted the market.

A Mylan press release from Aug. 25, argued that ACA plans with higher deductibles left patients with a higher price tag at the pharmacy. It wasn’t just Mylan’s argument. Director of Research at the Committee for Economic Development Joseph Minarik also blamed the ACA when he said the law created a distorted market in an Aug. 29, CNBC op-ed.

Minarik said Mylan was right to blame the ACA for burdening patients with higher premiums and that the law created a “broken system.”

“Within that broken system, many sellers are free from competition, and each can seek to maximize its share of an expanding and only elastically limited pool of health-care dollars,” he wrote.

In addition to the ACA, Obama signed a bill spurring on and incentivizing higher demand for Mylan’s EpiPen. According to the Chicago Tribune, the School Access to Emergency Epinephrine Act “gave financial incentives to states to enact their own mandates for schools to stock epinephrine autoinjectors.”

That Aug. 25, Tribune report quoted Wells Fargo analyst David Marist who said the law “helps market EpiPen and promote it as the trusted product in schools.”

The New York Times reported on Aug. 23, that Mylan started selling packs of two EpiPens instead of one after federal guidelines recommended that in 2010 Mylan also raised its prices. The Times also reported that the Adrenaclick could serve as a substitute to the EpiPen, but was not allowed to be swapped by a pharmacist.

STAT News reported on July 6, that pharmacists couldn’t make the switch because the FDA didn’t consider the two devices to be “therapeutically equivalent.”

“No apologies and no price cut offered today from the woman in the middle of a growing firestorm over the soaring cost of potentially life-saving EpiPens,” Holt began on Aug. 25, Nightly News. Costello followed Holt by suggesting that Bresch “may be the most unpopular CEO in America today.”

During one report, Costello said Bresch didn’t finish her MBA coursework at West Virginia University and that she relocated Mylan to the Netherlands, which had a lower tax rate.

CBS only showed one source defending Mylan other than the company itself, and that source was former CEO of Turing Pharmaceuticals Martin Shkreli. Before CBS showed Nair arguing with Shkreli, fill-in anchor Maurice Dubois described Shkreli as “the poster boy for drug price gouging.”

As if Dubois didn’t discredit Shkreli enough, Nair reported that he was under federal indictment and “was heavily criticized for his 5,000 percent hike of the malaria and HIV drug, Daraprim.”

World News Tonight anchor David Muir call Bresch’s $19 million salary “massive” on Aug. 24. His own salary is only $5 million after all. Another ABC story linked the salary hike and price increase by mentioning them back to back on Aug. 25.

Instead of providing the full story and criticizing the company, regulators and legislators for creating a crisis, the networks maintained the liberal narrative: that businesses and CEOs are bad. At the same time, they failed to see how big government contributed to the problem.