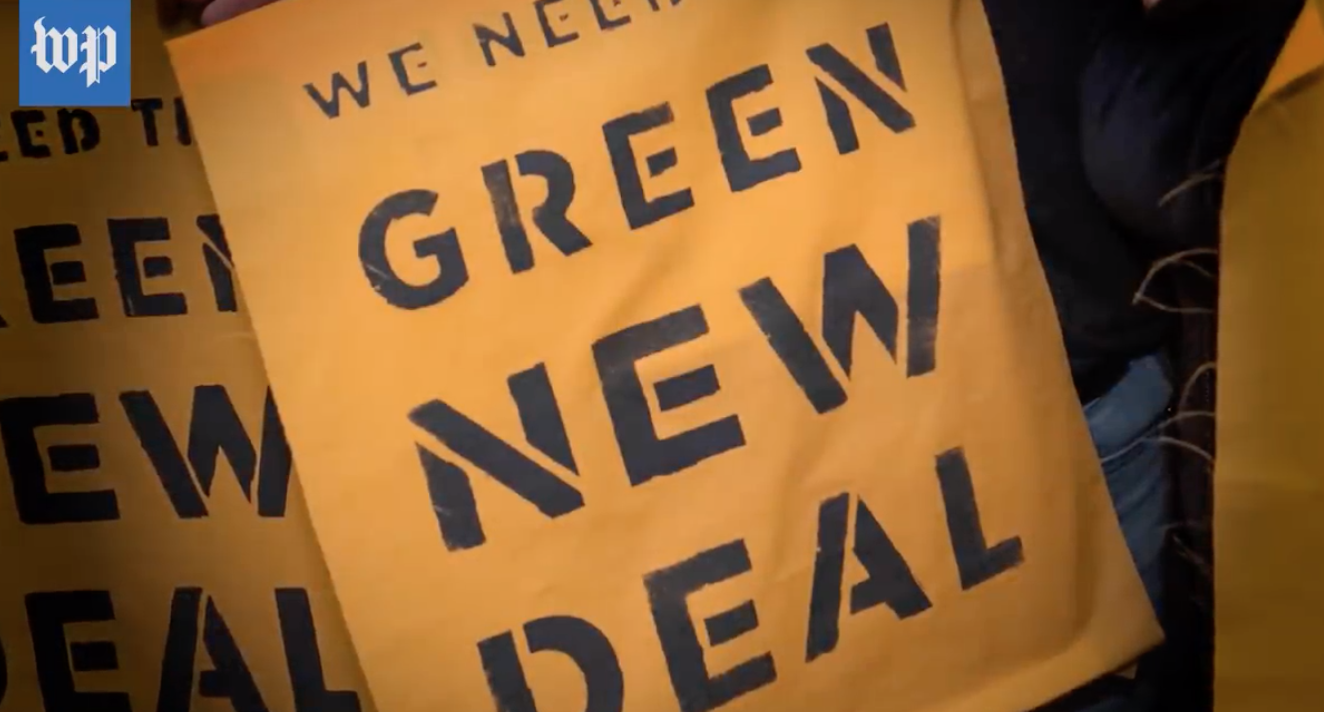 The Green New Deal concept is the latest rage among progressives and the media that love them. In this case, that would include The Washington Post and New York Times.

The Post’s promotions included bringing up the “smart” and “enormously popular” Green New Deal in at least 21 news or opinion pieces in just a month between Dec. 16, and Jan. 15. The Post touted a survey claiming a Green New Deal was “supposedly supported by most American voters.” Even though it’s doubtful anyone could explain what the deal really means.

The Times generated at least eight news or opinion pieces about it, including a glowing news piece about Rep. Alexandria Ocasio-Cortez, D-N.Y., pushing her party further left. That number also included columns from Thomas Friedman and Paul Krugman endorsing the “good idea.”

Friedman was thrilled to see the resurrection of a term he claimed he coined in a 2007 Times column.

Criticism was rare and minimal. Details about what the plan would cost (in dollars and jobs) and the overall size of government were even more difficult to find from those liberal outlets.

Both papers could have done that work simply by going to the Sunrise Movement’s Green New Deal website and looking at the “strategy” page and the Green Party website. Maybe they didn’t want to bring up facts that might jeopardize its chances.

For example, The Post reported Democratic-socialist Ocasio-Cortez’ plans for a Green New Deal on Jan. 8, in a story focused on how she was embracing the term “radical.” That article by Katie Mettler had no information about what the policy would look like, even it is truly radical. (Although, nonsensical might be a better word.)

National Review senior political correspondent Jim Geraghty did look for details and found the Green Party site had the “full language” for a Green New Deal which included a plan to cut military spending “by at least half,” “replacing non-essential individual means of transport” (essentially banning cars), require the complete transition off of nuclear, coal, oil and gas energy sources by 2030, and turn the government into an “employer of last resort.”

“In other words, within eleven years, the United States would need to replace about 88 percent of its current energy sources. This is not possible short of a societal collapse to agrarian subsistence,” Geraghty wrote.

Based on that information he estimated that the military cuts alone would mean 1.4 million job cuts, plus the 5.8 million people whose work is based on those targeted energy sectors or the auto industry. That’s 7.2 million people who would be either out of work or forced to become government employees under this absurd scheme.

Yet, proponents claim it’s going to “eliminate poverty” and even grow the economy.

Details like the ones Geraghty exposed would be sure to bring down the Green New Deal’s popularity. But so far, they’ve remained hidden from readers of most of the Post and Times articles and commentaries.

Friedman’s column celebrating a Green New Deal and encouraging “a hundred Green New Deal ideas [to] bloom” was one of the only ones that acknowledged it could also include “democratic socialist proposals” on jobs, wages and health care and more.

In contrast, The Post’s Ticker blog examined the cost and criticism of Ocasio-Cortez’ calls for higher taxes to pay for it on Jan. 7, but didn’t examine cost or criticism for the actual climate policy Ocasio-Cortez champions in a Green New Deal.

Earlier this year, the Post opinion section even offered “11 climate change policies to fight for in 2019,” on Jan. 2. It intentionally turned to “activists, politicians and researchers for climate policy ideas that offer hope.”

One of those 11 was Sunrise Movement activist Varshini Prakash who wrote, “We need a Green New Deal — a broad and ambitious package of policies and investments that would put millions of Americans to work transforming our economy away from fossil fuels by 2030 ...” It would need to be on a “scale of government action not seen since the Great Depression and World War II,” she added.

Sunrise Movement is the same activist group that led a sit-in in Speaker of the House Nancy Pelosi’s office demanding the creation of a House select committee mandated to create such a climate policy.

On Jan. 1, Times columnist Krugman also promoted the “big policy slogan of the moment.” In his column, “Hope for a Green New Year,” he asked, “Is this actually a good idea?” and answered with a resounding: “Yes, it is.”

He minimized how many “people would be hurt” by the effort citing ONLY the 53,000 people employed in coal mining. Moving to only wind/solar effort would obviously eliminate far more jobs.

Even the Post’s “Made By History” columnist Lawrence B. Glickman joined the media chorus promoting a Green New Deal. He also celebrated the revived love for FDR and massive government spending efforts.

Glickman wrote, “The left is pushing Democrats to embrace their greatest president. Why that’s a good thing. Democrats should proudly trumpet the New Deal — and extend it” on Jan. 14.

He argued that the Green New Deal as promoted by Ocasio-Cortez and embraced by other left-wing politicians (and the calls for higher taxes to help fund it) was something that “promises to reinvigorate the party and its agenda.”

MRC Business analyzed Nexis transcripts including the words “Green New Deal” from The Washington Post and The New York Times (print and online) for Dec. 16, through Jan. 15.