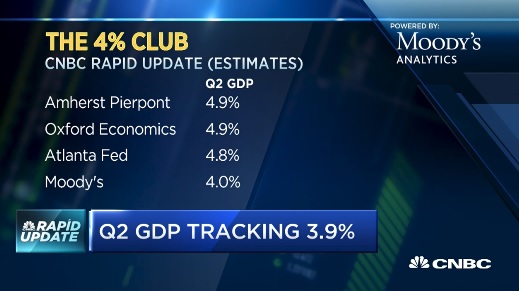 The official announcement of second-quarter economic growth won’t be out until July 27, but already the predictions look good. Just don’t expect to hear them on ABC, CBS and NBC.

Economists and Wall Street firms have been crunching numbers and making predictions Amherst Pierpont, Oxford Economics, the Atlanta Federal Reserve and Moody’s all forecast estimates of 4 percent or higher growth in the second quarter, CNBC reported on June 14. The very next day, Goldman Sachs released its model also pointing to 4 percent Q2 GDP, based on a manufacturing report.

All three networks’ evening news programs skipped the anticipation of strong economic growth June 14-17, which would presumably be touted by the Trump administration. Economic news wasn’t a priority at all those four nights, but many less important things were covered on World News Tonight, or Evening News or Nightly News.

The Wall Street Journal reported on June 14, that “The U.S. economy is revving up just as Europe and other major economists lose steam.” It cited the Federal Reserve’s quarter point interest rate hike as “an indication of growing economic vigor.”

“... [R]ecent data suggest an economic expansion that just became the second-longest in the nation’s history is accelerating, rather than slowing down,” the Journal continued. “The U.S. economy grew modestly over the winter—at a 2.2% annual rate in January through March—but seems to be ramping up further this spring. Growth is on track to exceed a 4% pace in the three months ending in June, which would be the fastest of any quarter in almost four years.”

It’s difficult to imagine that the networks would say so little about such positive economic forecasts if Barack Obama were still president (or if any liberal resided at 1600 Pennsylvania Avenue).

The government will announce the third revised estimate of Q1 GDP on June 28, and provide an initial read on Q2 growth in late July. That July report will either confirm, or disappoint those making 4 percent forecasts.