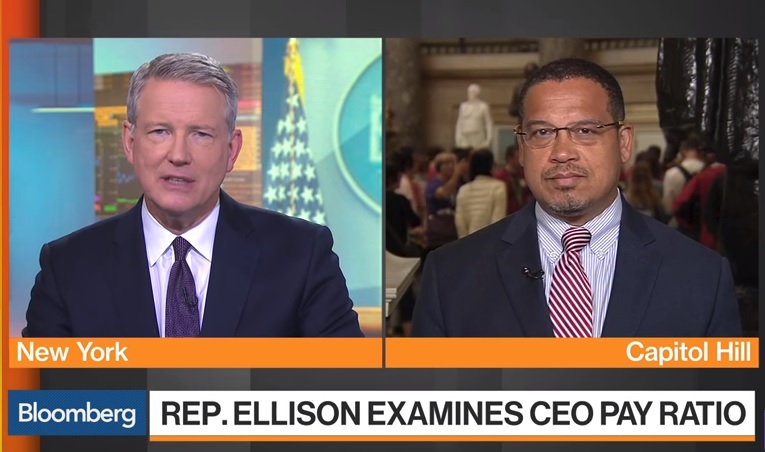 Knowing what CEOs make compared to their workers isn’t enough for the left, they also want to regulate it.

One of the leaders of the class warfare left is deputy chair of the Democratic National Committee and congressman Keith Ellison. He told Bloomberg News on May 16, the government should “start talking about” regulating corporate pay. Bloomberg News anchors failed to push back or ask difficult questions in that interview. Other outlets also accepted Ellison’s left-wing pay perspectives.

The media’s failure to critically examine Ellison’s remarks wasn’t a shock since his view that “income inequality” is terrible is an attitude the liberal media share and have promoted for years.

Many media outlets, including the three broadcast networks, previously warned of this “dangerous” and “devastating” problem, complained about the “mega-rich” (but not their own hefty paychecks), some called on Obama to do something about “income distribution” while others touted economic “fairness.”

The only real surprise was that Ellison’s latest report complaining about CEO pay ratios didn’t get a huge amount of coverage and promotion yet. He found that on average CEOs make 339 times that of a median worker. The highest ratio was 5000 to 1. The findings were reported by MarketWatch (and republished by the New York Post), The Hill, and The Guardian, in addition to Bloomberg’s interview.

MarketWatch and The Hill reported Ellison’s data and perspective uncritically while The Guardian lauded Ellison’s analysis as the “first comprehensive study of the massive pay gap.” That left-wing British paper also quoted Ellison complaining about the ratios of CEO pay and saying, “If wealth is being concentrated into fewer and fewer hands, then obviously wealth is being dissipated from more and more people.”

That’s an economic fallacy (called the zero-sum fallacy) and it is wrong because wealth grows — it doesn’t remain fixed. But it’s a fallacy the media also promote or accept, just as The Guardian did.

Rep. Ellison makes $174,000 a year — 11 and a half times what a minimum wage earner brings in annually (making $7.25 an hour and working 40 hours weeks). But no one complains about him taking away those workers’ wealth, because in this example the absurdity becomes obvious. CEO to median worker pay ratios are just as silly a comparison.

Still, the media turn to people like Ellison to rail against wealthy business people just as Bloomberg Markets: Balance of Power did on May 16. Anchor Sharon Ahn asked Ellison about “pay discrepancy between workers and CEOs.” Ellison’s report was called “Rewarding or Hoarding? An Examination of Pay Ratios Reveals by Dodd-Frank.”

He complained that “we found that CEOs are paid exorbitant amounts of money compared to workers. But how bad and extreme it was, really was even shocking to me.”

He went on to denounce pay ratios at Mattel, the Gap, and McDonald’s and dismissed business objections about the requirement them to include part-time workers and workers in other countries. How interesting that he didn’t bring any media CEOs up in that interview, since they often make hundreds of times more than their average workers.

Obviously, the inclusion of part-time workers is going to skew the data and when coming up with a ratio of CEO pay and the median worker’s pay.

Ellison’s argued that skewing didn’t matter because companies were in the wrong to have part-time workers and employees in other countries. That also becomes absurd when you realize many companies operate globally. It’s pretty hard to hire American workers for a McDonald’s franchise in Paris or Shanghai.

Westin said, “Congressman, if you really want to make progress in this area, and I’m sure a lot of people would be troubled the way you’re troubled, is it enough to just get disclosure? Because I think that’s what you are advocating, I mean, this is not a big secret to shareholders, not a big secret to the board. Don’t you need direct government intervention? Are you favoring the government actually regulating the relationship between CEO pay and the average worker?”

“I think it is a very good idea. And I think we should start talking about it. I think, but I want to go further than that. I’d like to see shareholders say,’ wait a minute? What’s is going on with my dividend? Wait a minute, what kind of risks are you taking on to get these exuberant amounts of money that could end up imperiling the company?’”

Neither anchor pushed back or asked hard questions about that radical possibility.

The same week as Ellison’s new report, USA Today published an op-ed by Ralph Nader and Steven Clifford that warned “CEOs aren’t disclosing their real compensation. The pay gap is much worse than you think.” But it didn’t specifically cite Ellison or reference his report.