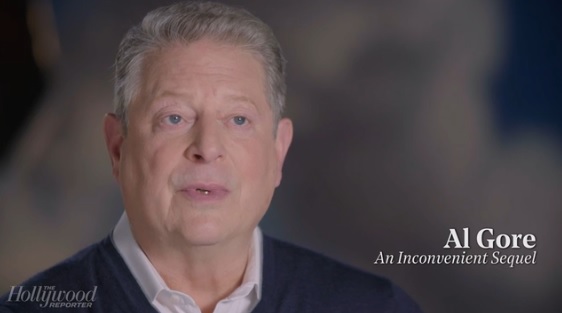 Former Vice President Al Gore still has admirers among the media, if the latest issue of The Hollywood Reporter is any guide.

Tatiana Siegel’s cover story dripped with adulation for Gore’s optimism and environmentalism, and was entirely devoid of criticism of him or his films. There was no mention of the errors or failed predictions in An Inconvenient Truth, no charges of hypocrisy for flying around the world to show a slideshow instead of using videoconferencing or some other technology, and no reminder that the planet managed to survive beyond Gore’s “point of no return.”

She described him as an eternal optimist “looking for light in the dark,” even with Vladimir Putin and in the face of Trump’s presidential victory.

“Although Gore spent two years with documentary cameras hovering around him wherever he went, the production somehow managed to remain relatively quiet. But the real drama, the extinction-level event that changed everything, happened after the filming wrapped: Trump won,” she wrote, summarizing Gore’s latest film.

Siegel referred to Trump’s win grimly in another paragraph writing, “Never has the universe seemed more dark and despairing — at least from an ecological crusader's point of view — than since the Nov. 8 election of Donald Trump (who once proclaimed global warming a "hoax" perpetrated by the Chinese).” She also labeled his EPA pick, Scott Pruitt, a “climate denialist.”

She also went out of her way to preempt potential charges of hypocrisy by portraying Gore as a real and devoted environmentalist with descriptions like this one: “practically everything in his office, from the sleek rocking chair to the ukulele sitting behind his desk, is made of sustainable wood.”

The writer took Gore’s at his word when he stated that his 10,000 square foot, Tennessee home is powered by 100 percent renewable energy, and he does not “own a private jet.”

“Never have. And everything I do is completely offset with carbon credits. I do everything I can to walk the walk as I talk the talk," Gore told Siegel.

She then turned attention to his diet: “He even eats like an environmentalist; four years ago, he became a vegan, partly for health reasons but also to cut back on his carbon footprint (meat-eaters' greenhouse emissions are twice as high as vegans' due to the methane released by livestock).”

Siegel also gave Gore credit saying “many” of his “dire climate predictions have come true” while ignoring all the failed or disputed predictions — such as his claim of stronger hurricanes like Hurricane Katrina. The data showed a major hurricane drought in the decade following Gore’s claim.

Gore also incorrectly predicted an ice-free Arctic and that Mount Kilimanjaro would soon run out of snow.

Gore’s An Inconvenient Sequel will be shown on Jan. 19, at Sundance 2017 in Utah, then released widely by Paramount later in 2017. According to THR, the sequel will not be a dressed up version of Gore’s slideshow, but “more of a cinema verite travelogue, following Gore through the corridors of world power ...”

If its reception is anything like the last one, the liberal media will again promote Gore as a “genius,” and the “coolest guy in the room,” all while they ignore critics, errors, wrong predictions and charges of hypocrisy.