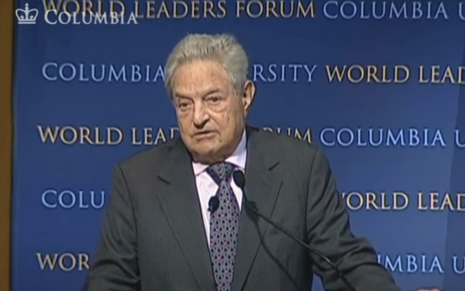 The Capital Research Center (CRC) reported Jan. 4 that new filings reveal that Soros’ “nonprofit empire has poured out nearly $21 billion since 2000, making him perhaps the biggest ATM for leftist political causes in the world.”

To put that into perspective, The University of California Berkeley projected that if one were to save money at a rate of $100 per day, it would take 27,397 years to save $1 billion. That means it would take a person saving $100 per day roughly 575,342 years to save up to the $21 billion Soros unleashed since 2000 in an effort to secure the leftist political outcomes he desired in the U.S. and around the globe.

CRC’s report was released just a day before MRC Business released its second report in a three-part series on Soros’ unparalleled influence in the global media. The second report noted how Soros funneled at least $131 million between 2016 and 2020 into 253 news and activist media groups around the world to amplify his radical messaging on issues including abortion, Marxist economics, anti-Americanism, defunding the police, environmental extremism and LGBT fanaticism.

MRC President Brent Bozell warned Americans Dec. 6 on Fox News at Night that Soros’ global media influence makes him “a dangerous man.” This new revelation from CRC, denoting the leftist billionaire’s direct involvement in infusing his leftist dogma into global politics through his cash is a case in point.

The CRC numbers included “close to $36 million” in Soros funding to the web of leftist dark money nonprofits in the Arabella Advisors network. CRC has called Arabella Advisors one of the “country’s most influential left-of-center nonprofit funding operations.” CRC also noted that while Arabella Advisors’s “influence has traditionally been quantified in vast sums of money, it evidentially can also be measured by their connections to high-level officials in the executive branch.”

The Arabella network’s pull in U.S. politics is nothing short of jaw-dropping.

One of Arabella’s Soros-funded nonprofits, the notorious Sixteen Thirty Fund, spent $410 million to defeat former President Donald Trump in the 2020 election. And one of the Sixteen Thirty Fund’s radical pet projects, Fix Our Senate, was behind a push to kill the Senate filibuster.

In addition, CRC tracked $2.5 million in Soros-funding to the leftist “fake news” operation Courier Newsroom, which has been accused of “exploiting the collapse of local journalism to spread ‘hyperlocal partisan propaganda’” and influence the 2020 election, according to OpenSecrets. The operation was founded by leftist activist Tara McGowan. McGowan once spewed in her Twitter bio: “[W]eaponizing truth to get Trump TFO.”

Soros Report Part Three: MRC Business will expose who in the establishment media are connected to George Soros.