It turns out that not only did the Ministry of Truth brigade at the FBI push Twitter to censor the Hunter Biden laptop scandal, but it also reportedly paid the Big Tech platform millions of dollars. 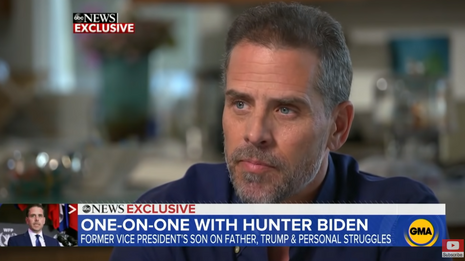 Independent journalist Michael Shellenberger, who reported on the latest batch of Twitter files Dec. 19, noted that “The FBI’s influence campaign may have been helped by the fact that it was paying Twitter millions of dollars for its staff time.”

An associate of former Twitter Deputy General Counsel James Baker told him and former Twitter General Counsel Sean Edgett in a February 2021 email: “I am happy to report we have collected $3,415,323 since October 2019!” Baker was a prominent FBI figure that historically helped perpetuate the Russia-Trump collusion hoax.

Twitter owner Elon Musk didn't mince words about the implications of the funding: "Government paid Twitter millions of dollars to censor info from the public."

Government paid Twitter millions of dollars to censor info from the public https://t.co/eSEwcZlGjt

The email suggested that Twitter’s Safety, Content & Law Enforcement (SCALE) division set up a “reimbursement program” for staff hours dedicated to “processing requests from the FBI.” This would suggest that the FBI was potentially funneling money to the Big Tech platform while simultaneously shaping Twitter’s censorship operations in preparation for the Hunter Biden scandal reported by the New York Post October 14, 2020.

Shellenberger stated that the FBI obtained Hunter’s laptop as early as December 2019 from a “Delaware computer store owner” who claimed Biden had left it with him. “By Aug 2020, Mac Isaac [the store owner] still had not heard back from the FBI, even though he had discovered evidence of criminal activity. And so he emails Rudy Giuliani, who was under FBI surveillance at the time. In early Oct, Giuliani gives it to @nypost,” Shellenberger wrote. 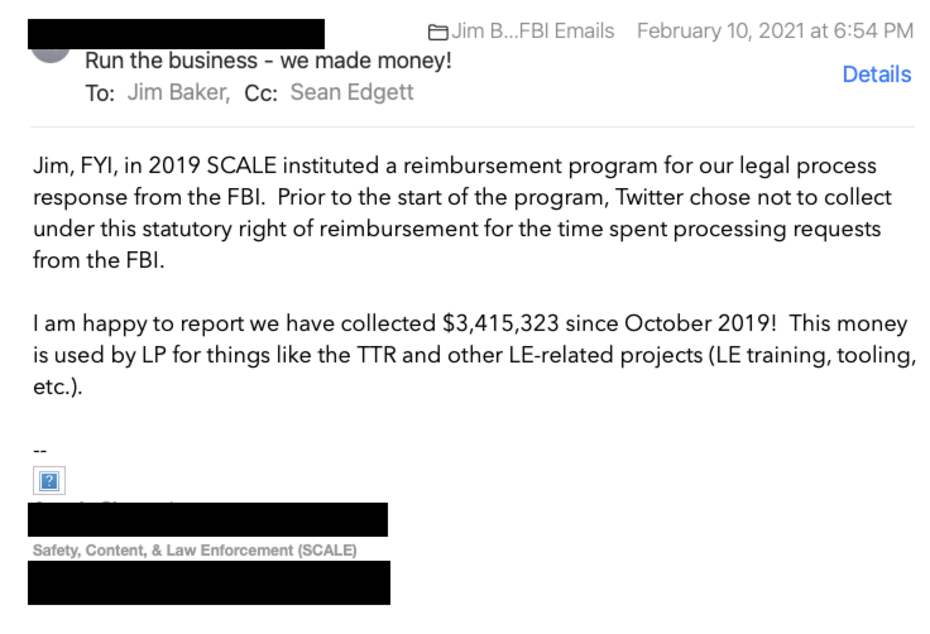 In one of the most jaw-dropping cases of Twitter censorship, House Judiciary Committee Republicans linked to a press release on their website that contained a republished version of the Hunter Biden story initially published by the Post. The press release also linked to the original story. When users attempted to click the link to the official press release, they instead received a warning titled: "Warning, this link may be unsafe."

Holy sheep shit. The government was actually paying Twitter to censor people.@elonmusk, maybe there is a way to make Twitter profitable! (Though will cost you your soul.) https://t.co/7oDPozZXpF

In a statement with the Federal Election Commission, leftist former Twitter Head of Trust and Safety Yoel Roth admitted that “[s]ince 2018, I have had regular meetings with the Office of the Director of National Intelligence, the Department of Homeland Security, the FBI, and industry peers regarding election security.”

Specifically, according to Roth, “federal law enforcement agencies communicated that they expected ‘hack-and-leak operations’ by state actors might occur in the period shortly before the 2020 presidential election, likely in October.”

The Post would release its report on Hunter’s laptop Oct. 14. It was then that “[t]he Site Integrity Team preliminarily determined that the information in the articles could have been obtained through hacking, based on, among other things, the type of material, the sourcing described in the articles, and the information security community's initial reactions,” according to Roth.

It’s as if Twitter acted like a state agent and was being paid millions to do it. MRC’s CensorTrack database, which was launched in September 2020 and is uniquely designed to track and document cases of censorship across many Big Tech platforms, logged 4,799 cases of censorship so far. Censorship cases from Twitter accounted for over 55 percent of the total logged CensorTrack entries.

The FBI’s involvement in maneuvering Twitter’s censorship operations wasn’t limited to the Hunter Biden bombshell. In fact, a previously reported batch of Twitter files, according to independent journalist Matt Taibbi, showed something “new: agencies like the FBI and DHS regularly sending social media content to Twitter through multiple entry points, pre-flagged for moderation.”

One of the accounts targeted by the FBI was the right-leaning Right Side Broadcasting Network. Regarding Hunter’s laptop, Taibbi stated in his reporting on the first batch of Twitter files Dec. 2 that the “hacked” materials policy basis promoted by Roth sparked confusion among leadership and staff.

The policy basis for the censorship reportedly didn’t hold weight as a serious decision.

Shellenberger’s latest analysis revealed that the FBI sent 10 documents to Twitter just before the Post released its report on Hunter. The over $3 million in funding makes Twitter’s direct interference in the 2020 election all the more consequential and raises serious questions regarding potential violations of the First Amendment.