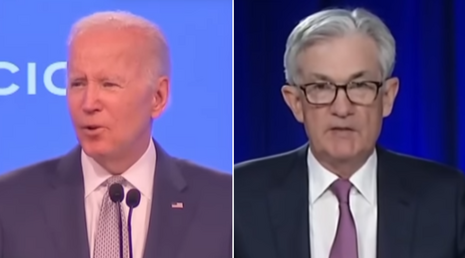 In an editorial headlined, “The Fed Has a Narrow Path Between Inflation and Recession,” the editorial board sounded alarm bells that “the Fed’s prospects for curbing inflation while avoiding recession are fast receding.”

The board conceded that the “some analysts” who hoped the “worst was over” were “mistaken,” as ”prices continue to rise quite broadly, and in an extraordinarily tight labor market they’re dragging wages down with them.”

But when it came to holding the “transitory” apologists at the Fed and the Biden White House accountable for their disastrous policies that underscored much of the 40-year-high inflation spike, the editors flinched and blamed other things instead. “To be sure, supply-side shocks — first the pandemic, then the war in Ukraine and subsequent sanctions against Russia — are principal drivers.” [Emphasis added]

In fact, the name “Biden” doesn’t appear once throughout the entire op-ed.

Meanwhile, the Editorial Board even sung the praises of the Fed’s so-called “credibility,” which was absurd given the institution’s role in downplaying inflation worries and injecting enormous amounts of cash into the economy.

“In one way, the market’s gloom over the prospects for output and corporate earnings is welcome: It attests to the Fed’s credibility,” the Bloomberg editors bleated. “If inflation stays high, investors are saying, the Fed can be counted on to act.” So, Americans should just trust the very institution that greatly contributed to the inflation mess to fix it?

Business journalist Christopher Leonard pinned blame on the Fed’s out-of-control money printing in a June 11 op-ed: “The financial earthquakes of 2022 trace their origin to underground pressures the Fed has been steadily creating for over a decade.”

Heritage Foundation regional economics research fellow EJ Antoni did what Bloomberg editors wouldn’t and called out Biden and the Fed for their contributions to inflation:

While COVID lockdowns and reckless government spending have caused significant economic harm, the Federal Reserve has also been asleep at the wheel by enabling the federal government’s spending spree with its money-printing policies.

The editorial board’s piece also flies in the face of its own publication’s reporting, which directly skewered the Fed for its role in the inflation crisis in a June 15 piece plainly headlined: “Central Banks Got it Wrong”:

At the root of the tension is that [Fed] officials failed to spot the lasting power of surging inflation and then proved sluggish to respond to it. Throw in various mixed messages and policy reversals along the way and it’s fair to ask if the managers of monetary policy have lost their touch.

The Bloomberg editors didn’t come close to that biting criticism in their editorial.

Instead, the editorial board worked  on crafting the Fed’s policy and public relations strategy. Disappointingly, the board’s prescription involved risking forcing the country into recession because of a crisis Biden and the Fed helped create:

Whether it’s 50 or 75 basis points this time, unexpectedly high inflation, should it persist, will call for a faster-than-advertised pace of tightening between now and the end of the year — even if this increases the risk of recession. That’s the message the Fed needs to send.

Conservatives are under attack. Contact letters@bloomberg.net and hold the Bloomberg Opinion editorial board to account for ignoring Biden and the Fed’s responsibility for America’s inflation crisis.