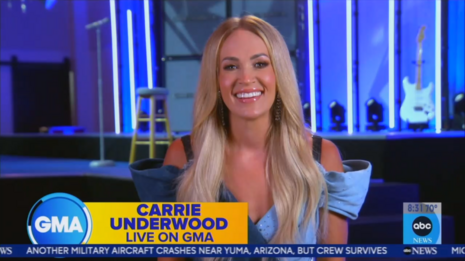 The Bureau of Labor Statistics’s (BLS) June 10 report revealed that inflation soared by 8.6 percent compared to last year, beating the Dow Jones estimate of an 8.3 percent increase. Food and energy prices captured the lion’s share of inflation, with meats, poultry, fish and eggs rising by 14.2 percent. Egg prices alone surged by 32.2 percent over the past year. But the greatest individual price hike was fuel, skyrocketing a massive 106.7 percent year-over-year.

But, guess what? ABC’s Good Morning America, CBS Mornings, NBC’s Today and NBC’s 3rd Hour of Today couldn’t be bothered to give the terrible economic news any meaningful coverage on their June 10 broadcasts. The only pathetic mention GMA gave of the BLS news was a single news chyron. That’s it.

“Plenty of experts will tell you that this CPI report doesn’t really matter. It was a fluky rise in used car and apparel prices! They’ll say. Obviously that’s skewing the results,” CNBC host Kelly Evans wrote June 10, reacting to the inflation news. “But I think we all know by now that each month seems to bring these ‘fluky’ factors that all point to the same conclusion: our inflation problem is worse than anybody seems to want to admit.” [Emphasis added].

Instead of covering the disastrous inflation situation, the morning shows treated viewers to an entertainment and marijuana junk fest. GMA devoted 323 seconds to an interview with country singer Carrie Underwood on her ninth studio album, “Denim & Rhinestones.”

Weather Channel meteorologist Jim Cantore took time on CBS to show off his socks emblazoned with lightning bolts and talk about Sriracha to his fawning co-hosts. Over at NBC, Today highlighted late singer Judy Garland in a “Pride Is Universal” segment to promote Gay Pride Month. And later on the 3rd Hour of Today, the hosts spent 300 seconds on a new job: a cannabis sommelier.

“You got to show us those socks at some point,” CBS host Anne-Marie Green said. “You want to see the socks?” Cantore responded, pulling up his pants to show off his lightning bolt-adorned socks. He later discussed the Sriracha shortage. Hey, CBS, how about you “show us” the terrible inflation numbers “at some point,” OK?

NBC spent precious coverage attempting to portray Garland as an LGBTQ icon: “As the decades passed, Garland remained an heroic figure to many in the gay community.”

GMA covered the inflation news in just a single chyron: “Wall Street Reacting to Key Inflation Report Out This Morning.” That was the only coverage any of the Big Three news networks gave the soaring inflation numbers.

But GMA did find time to interview Underwood on her new album: “You are calling this — I love this — your ‘denim and rhinestones era,’” GMA host Amy Robach asked the country singer. “That’s big; what does that mean?”