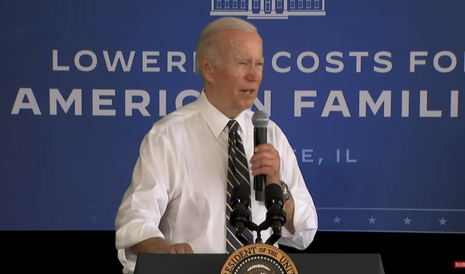 The Post’s liberal fact-checker Glenn Kessler once published a story in July 2021 headlined: “The bogus GOP claim that Biden is responsible for higher gasoline prices.” The newspaper’s leftist opinion columnist Jennifer Rubin wailed in March 2022 that Republican assertions blaming Biden for spiking gas prices were “untrue.” The Post even claimed May 31, 2022 that the surging gas prices stemmed from “factors beyond the president’s control.” But insulating Biden from any responsibility comes well after after a Nov.12, 2020 Post article that caricatured the entire idea of rising prices under Biden as conservative scare-porn altogether: “Conservatives predict gas prices will spike under Biden. Experts say those fears are overblown.”

The 2020 Post article targeted a so-called “dubious” conservative meme that reportedly predicted, “The price of gasoline will spike because Joe Biden is taking office.” The article dismissed the concerns as being “fueled by Trump himself as a piece of his broader criticism of the Democrat's plan for tackling climate change.” The Post even claimed that potential Biden policies "— such as cranking up requirements on automakers to make more fuel-efficient vehicles or boosting incentives to buy electric cars — probably will reduce demand for gasoline and put downward pressure on prices." But fast-forward well over a year into Biden's presidency and the national average for prices of regular unleaded fuel just hit a whopping $4.95 per gallon as of June 8, 2022, according to AAA. Talk about a plot twist.

But the idea that Biden’s presidency would spur a gas price hike wasn’t so far-fetched for MarketWatch, which published an October 2020 piece headlined: “Why a Biden presidency may lead to higher gasoline prices.” Even Washington Post opinion columnist Marc Thiessen was blunt in a May 2022 piece on Biden’s culpability for the current gas crisis eating into Americans’ wallets: “Gas prices are through the roof. That’s just how Biden wants it.”

“It’s hard to escape the conclusion that Democrats welcome high gas prices as part of an intentional strategy to speed our transition away from fossil fuels,” Thiessen noted.

But the November 2020 Post article absurdly assumed that Biden’s gambit for an energy “transition” away from fossil fuels would merely “have a mixed effect on the petroleum prices.” Since then, not only have gas prices spiked, they’ve “doubled since Biden took office,” the New York Post reported.

Forbes senior contributor David Blackmon, amid a reported “40-year career in the oil and gas industry,” wrote a piece June 5, 2022 headlined: “Consumers Pay The Price As Biden’s War On Oil And Gas Expands.” Blackmon pointed out that “Despite the reality that a shortage of refining capacity is a cause of high diesel prices, Biden’s EPA carried the administration’s assault on the industry to its downstream sector late in the week.”

In a Wall Street Journal op-ed, Continental Resources Chairman Harold Hamm said the “one thing” that “stands in the way” of Americans seeing relief at the pump is“President Biden’s unwillingness to reverse course on his administration’s commitment to put the American oil-and-gas industry out of business at the consumer’s expense.”

Dithering between portrayals of Biden’s gas crisis as a fairytale and outright exoneration of the president is a pretty embarrassing look for The Post. But Americans shouldn’t expect the liberal rag to admit it will just mindlessly defend Biden no matter how ridiculous doing so looks.

Conservatives are under attack. Contact The Washington Post at 202-334-6000 and demand it address its 2020 claims that there wouldn’t be high gas prices under Biden.