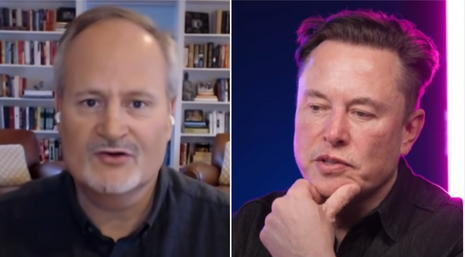 Timothy O’Brien published a tone-deaf piece headlined: “Elon Musk’s Twitter Investment Could Be Bad News for Free Speech.” Musk, worth around $280 billion as of late Wednesday morning, bought a sizable 9.2 percent stake in Twitter, totaling 73,486,938 shares, which makes Musk the platform’s biggest shareholder. O’Brien fretted in response. “I suspect there’s something more serious informing Musk’s decision to invest in Twitter, even if he revels in buffoonery: Maybe he wants to bring Twitter to heel,” O’Brien wrote. Musk tweeted mockery of O’Brien’s opinion piece, which The Washington Post republished. “WaPo always good for a laugh,” Musk tweeted. Musk slammed the platform on March 26 for its censorship-heavy environment: “Given that Twitter serves as the de facto public town square, failing to adhere to free speech principles fundamentally undermines democracy.”

WaPo always good for a laugh 🤣🤣

O’Brien hinged his entire argument on three hyperlinked articles that supposedly illustrated Musk’s alleged history of firing employees at Tesla, suing whistleblowers and threatening lawsuits against anonymous bloggers: “So despite ample room in which to exercise his speech — and aggressively trying to curtail the free speech of some of his critics — Musk evidently feels aggrieved,” O’Brien said. After brooding that Musk may name more people to Twitter’s board of directors, O’Brien chafed: “That’s worrisome, because it’s not ideal to have a free speech absolutist who isn’t absolutely in favor of free speech at the helm of — or even close to — a media company.”

O’Brien’s hypocrisy seems to know no bounds. His two-bit whining about Musk threatening “free speech” is coming from the same guy who demanded Fox News cancel Tucker Carlson for allegedly being a “deft propagandist” trafficking in so-called “white supremacist myths.” Additionally, how does O’Brien have the audacity to link stories about Musk threatening lawsuits against bloggers when his own company reportedly fired and threatened its own reporter Michael Forsythe with a massive lawsuit for daring to investigate corruption in the Chinese Communist Party?

Did O’Brien also forget he’s talking about one of the most anti-free speech, censorship-obsessed platforms on the internet? Twitter CEO Parag Agrawal stated on the record that the platform’s role was “not to be bound by the First Amendment,” but to decide “who can be heard.” It’s unclear how, exactly, O’Brien is arguing Musk would threaten free speech, given that Twitter has already taken its First Amendment attacks to orbit without Musk.

O’Brien contradicted himself by saying that Musk has “libertarian leanings,” which places emphasis on “freedom of speech,” according to Encyclopedia Britannica. “One explanation for Musk’s sensitivity might be found in his libertarian leanings,” O’Brien claimed. He then quipped that “[b]elated efforts by social media platforms to constrain some of the most virulent forms of political propaganda have raised the hackles of that crowd (along with far-rightists and Trumpistas).” In essence, O’Brien tried to justify social media censorship while simultaneously chiding Musk for supposedly endangering free speech.

Conservatives are under attack. Contact Bloomberg at letters@bloomberg.net and demand it distance itself from O’Brien’s nonsensical take on Elon Musk.