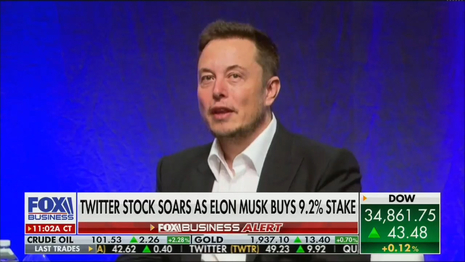 Musk put his money where his mouth is after condemning Big Tech censorship. The world’s richest man, worth $298 billion, according to Forbes, bought a massive share of Twitter stock. A Securities and Exchange Commission filing dated April 4 revealed that as of March 14, Musk now owns “73,486,938” shares totalling a sizable “9.2%” of Twitter’s stock.

The Financial Times reported Musk’s investment effectively made him Twitter’s “largest shareholder.”’ The platform’s shares soared “more than 24%” after Musk bought into the company, CNBC reported. The outlet noted that Musk’s investment is worth “$2.89 billion” based on Twitter’s closing price as of Friday.

Wedbush analyst Dan Ives reportedly told CNBC that the purchase “‘could lead to some sort of buyout.’” He was not the only commentator to warn that Musk’s move may be a sign of things to come. LightShed Partners co-founder Rich Greenfield explained on the April 4 edition of CNBC’s Squawk Box that Musk’s move “underscored for investors that Twitter can be acquired.” Squawk Box co-anchor Joe Kernen theorized Musk’s motivation: “He’s doing it because he wants to change the way that Twitter is being run right now in terms of censorship.”

Musk has a history of criticizing Big Tech for its stranglehold on online speech.

He restated his support for free speech by proclaiming in a tweet: “Free speech is essential to a functioning democracy.” He shared a poll to his followers in the same tweet: “Do you believe Twitter rigorously adheres to this principle?” An overwhelming majority 70.4 percent of users who responded to Musk’s poll answered: “No.”

A Twitter user asked Musk in late March if he would “consider building a new social media platform” where “free speech and adhering to free speech is given top priority” and where “ propaganda is very minimal.” Musk replied: “Am giving serious thought to this.”

Vice President of Free Speech America and Business for the Media Research Center Dan Gainor praised the idea in a tweet: “Please do this, but be prepared for epic opposition from the left/NGOs and government. They fear free speech as we have truly witnessed the last two years especially.”

Musk has already proven that he is willing to stand for free speech amidst the war in Ukraine:

Starlink has been told by some governments (not Ukraine) to block Russian news sources. We will not do so unless at gunpoint. Sorry to be a free speech absolutist.