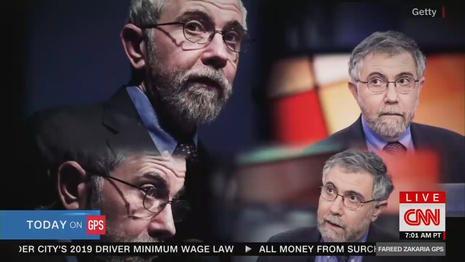 New York Times economist Paul Krugman seems to be a glutton for punishment to his already pathetic track record of atrocious economic predictions.

Krugman is back trying to gaslight Americans over the 40-year high inflation crisis — again — in an op-ed headlined, “How High Inflation Will Come Down.” Krugman gave credence to the asinine view of the Federal Reserve that “high inflation will be a temporary phenomenon. Furthermore, the Fed believes that it can bring inflation down relatively painlessly.”

Even Krugman needed to slightly hedge from that ridiculous position: “The landing probably won’t be as soft as the Fed envisions, but this time disinflation shouldn’t, or at least needn’t, be an extremely painful process.” His logic: Hey, at least it’s not the 1980s.

“Professional forecasters expect inflation to moderate next year. This means that we almost surely aren’t experiencing the kind of self-perpetuating inflation that was so hard to end in the 1980s,” Krugman claimed. This is the same Krugman who absurdly stated that the 40-year high inflation was “not a crisis.”

Krugman may just want to sit the inflation debate out, given his recent January concession that his record on the matter is abysmal:

[L]ife comes at you fast, as I say, I mean, I don't know what the opposite of instant gratification is, but I've had instant antigratification in the sense that that I made an inflation call and it went [sic] wrong pretty fast, and I think we all have to try to understand what the hell has been going on, [emphasis added].

Krugman apparently still doesn’t “understand what the hell has been going on.” As with many of Krugman’s arguments, his own circle of media liberals undercut him. Bloomberg News just released a report with a pretty damning headline: “White House Budgets for an Unrealistic Inflation Slowdown.” Krugman’s own newspaper warned of a looming “recession risk” because of inflation. Moody Analytics Chief Economist and “registered Democrat” Mark Zandi reportedly just told CNN that “‘[r]ecession risks are uncomfortably high -- and moving higher.’” So much for Krugman bleating that “[t]he inflation of 2021-22 looks very different, and much easier to solve, from the inflation of 1979-80.”

Even more revealing is that Krugman seemed to have got his facts wrong in contrasting the current crisis with 1979-80 inflation by claiming: “The big surge in rents also appears to be largely behind us, although the slowdown won’t show up in official numbers for a while.” As his colleague and New York Times reporter Stuart Thompson pointed out: “Funny that this statement and the link included to prove it make different conclusions… .” The link Krugman used to make his point actually stated the reverse:

After a brief seasonal reprieve, rents are back on the rise, with a 0.8 percent increase in February. Although rent growth has cooled from last summer’s peak, it continues to exceed pre-pandemic trends.

Funny that this statement and the link included to prove it make different conclusions… https://t.co/bMak6KPRWQ pic.twitter.com/rQ0IG9R64S

Krugman even attempted to resurface the exhausted argument of blaming the Russian invasion of Ukraine for America’s inflation woes: “Rising prices will get worse before they get better. Russia’s invasion of Ukraine has caused the prices of oil, wheat and other commodities to soar.” This is the same misleading argument that former President Barack Obama’s National Economic Council director Larry Summers said Biden was “wrong” for making.

Conservatives are under attack. Contact The New York Times at 1 (800) 698-4637 and demand it distance itself from Krugman’s economic nonsense.