BONKERS: The Atlantic Cries Nuclear War Is a ‘Climate Problem’ 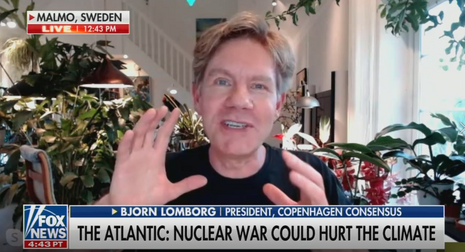 A deranged Atlantic article argued that when talking about nuclear war’s likely catastrophic death toll, one should also address how it would “wreck” the climate.

The Atlantic had the audacity to publish an eco-extremist piece posing as serious scholarship: “On Top of Everything Else, Nuclear War Would Be a Climate Problem.” The piece, written by Atlantic staff writer Robinson Meyer, pontificated to readers: “If you are worried about rapid, catastrophic changes to the planet’s climate, then you must be worried about nuclear war.”

It got worse as Meyer tried to put climate politics on the same level as mass slaughter: “On top of killing tens of millions of people, even a relatively ‘minor’ exchange of nuclear weapons would wreck the planet’s climate in enormous and long-lasting ways.” Hoover Institution senior fellow Bjorn Lomborg had a one-liner response to Meyer’s absurdity during a March 15 segment on Fox and Friends, calling the article’s premise "out of whack with reality.”

Meyer proceeded to ponder that a one-megaton nuke would mean “immediately flattening buildings, knocking down power lines, and triggering gas leaks” in addition to the “organ-destroying effects of radiation.” Meyer wildly framed his whole example as a mere precursor to a larger climate Armageddon: “But only at this moment of the war do the climate consequences truly begin.”

His conclusion was just as awful:

Outside of the direct effects of the bombs themselves, the full effect of a nuclear exchange could be even worse. If several years of gasoline- and diesel-fueled conventional military operations followed the global destruction, then the permanent consequences for the climate system would be even worse, [emphasis added.]

Conservatives are under attack. Contact The Atlantic at (202) 266-6000 and demand it denounce Meyer politicizing nuclear war.