Podcaster and comedian Joe Rogan is clearly fed up with uber-liberal mega-billionaire Bill Gates and his incessant claims that meat-eating is sinful and unhealthy, while at the same time allegedly not being in the best shape himself. 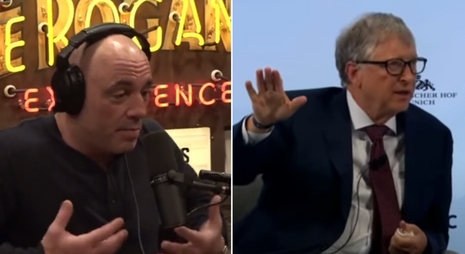 Rogan addressed the “problematic” methodology of a study published in The Lancet during the Feb. 25 edition of The Joe Rogan Experience. The study alleged that 2019 estimates of deaths traced to unprocessed red meat intake have spiked 36-fold. The controversial study listed the Bill & Melinda Gates Foundation as one of its key funders.

A rebuttal published in The Lancet warned that based on the study’s flaws, “it would be highly inappropriate and imprudent for the [Global Burden of Disease] 2019 dietary risk estimates to be used in any national or international policy documents, nor in any regulatory nor legislative decisions.”

Gates, who has a gargantuan net worth of $129.9 billion, reportedly told the MIT Technology Review in February 2021 that “all rich countries should move to 100% synthetic beef.”

Rogan didn’t mince words and called out Gates for looking “like shit” physically while lecturing the rest of the world to change its diet. Rogan also suggested Gates could be profiting off of his alternative-meat push. Gates reportedly “invested in [a] range of ‘synthetic meat’ startups including Impossible Foods, Beyond Meat, Memphis Meats and Hampton Creek Foods,” according to Australia-based Beef Central.

“If you’re eating those, those plant-based burgers or whatever the f*ck you’re doing — like, you’re obese,” Rogan snarked. The podcaster didn’t let up in slamming Gates’ hypocrisy: “A guy like that telling people about– he’s got these breasts and this gut — and I’m like, this is crazy.” After pointing out that Gates’ billions allow him access to some of the best nutrients available, Rogan said Gates’ behavior was “literally like a non-athlete trying to coach professionals. Like, what the f*ck are you talking about?”

He continued: “How are you giving any health advice when you look like that? Your health is piss-poor. I’m not a doctor, but when you’ve got man-boobs and a gut and you’re walking around — you have these, like, toothpick arms — I’m like, ‘Hey buddy, you’re not healthy.’”

Calling for the world to change its diet is not the only hubristic elitism Gates has pushed in recent days. He said during the annual Munich Security Conference earlier this month that the world could prevent the next pandemic if it adopted the Orwellian, tyrannical COVID-19 policies Australia inflicted on its citizens. Fox News reported that Australia “had some of the strictest lockdowns in the world throughout the pandemic. The country's ‘COVID zero’ policy in part prevented international arrivals, closed state borders, and enforced city and state-wide lockdowns, sometimes even after just one reported COVID-19 case.”

Conservatives are under attack. Contact Bill Gates and tell him to stop lecturing the world about its meat-based diet.