UPDATE: The White House released a readout Feb. 25 confirming that its meeting on combatting climate change denial had in fact taken place.

The leftist U.K.-based Center for Countering Digital Hate (CCDH) is back attacking the Media Research Center and complaining that Facebook isn’t doing enough to silence those who question the left’s eco-extremist take on climate change. Liberal media outlets are boosting the foreign CCDH’s activism just as the White House was reportedly set to hold its first event tackling “climate change denial” yesterday. 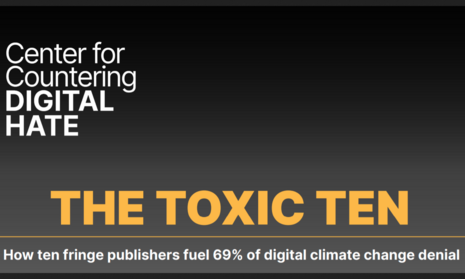 NPR, Reuters, Forbes, The Hill and The Washington Post all slobbered over CCDH’s latest propaganda report headlined, “Facebook failing to flag harmful climate misinformation, new research finds.” The report whined that “Facebook is falling short of its promises to tackle climate misinformation.” The group flailed that its “new analysis” found “that the platform fails to label half of posts promoting articles from the world’s leading publishers of climate denial.” Groups listed in the attack were publications like NewsBusters, Breitbart, The Daily Wire and The Washington Times.

CCDH specifically targeted a NewsBusters article that noted in its headline that CNN Chief Climate Correspondent Bill Weir and CNN Newsroom anchor Ana Cabrera were spewing “Alarmist Climate Propaganda.” Weir is the same person who published an insane climate letter to his newborn son in 2020 in which he said, “the milk in your bottle was warmed by dirty, ancient fuels and as a result, you will learn to walk on a planet that has never been this hot for humans.”

This is the second attack by CCDH against the MRC in just roughly over three months.

CCDH’s leftist CEO Imran Ahmed bleated in the new report that “Meta is exacerbating the climate crisis. Climate change denial—designed to fracture our resolve and impede meaningful action to mitigate climate change—flows unabated on Facebook and Instagram.” But the CCDH is anything but impartial in the climate change debate. CCDH is funded by the Switzerland-based, left-wing Oak Foundation, which the Capital Research Center labeled as “The Left’s Green Giant.” Oak gave CCDH at least $100,000 in 2020 alone. Oak is involved in helping to fund efforts to green the Belt and Road Initiative, “a global trade infrastructure project pushed by Chinese President Xi Jinping to link the communist country with the rest of Eurasia.”

Ahmed has a history as an activist for Britain’s leftist Labour Party. He also co-authored a book attacking free market economist Friedrich Hayek titled “The New Serfdom: The Triumph of Conservative Ideas and How to Defeat Them.” His gambit apparently includes silencing conservative speech online altogether.

Some of the headlines in the legacy media propping up CCDH’s latest boo-hooing about its opponents shows they’re not too keen about conservatives speaking freely about climate change either. NPR’s story was headlined, “Facebook fell short of its promises to label climate change denial, a study finds.” The faux free market publication Forbes griped how “Climate Change Denial Still Rife On Facebook, Say Researchers.” Reuters, which mentioned the CCDH’s conniption over NewsBusters, headlined its story: “Facebook did not label posts from top climate change deniers, report says.”

The CCDH published a report in November 2021 called “The Toxic Ten” that targeted the MRC, in addition to eight other conservative organizations for daring to challenge the left-wing, climate-change, fear-mongering narratives. Those organizations were The Daily Wire, Breitbart News, The Washington Times, Townhall Media, Newsmax, The Federalist Papers, The Patriot Post and The Western Journal. It accused these organizations of producing “content that sows climate change skepticism on social media platforms, creating the sense that there is a more extensive debate than there really is.”

What makes CCDH’s latest attacks downright Orwellian is that the White House Office of Science and Technology Policy was set to “hold a first-of-its-kind roundtable with some of the nation’s leading scientists on Thursday to discuss” climate change denial, according to a story in The Post. The Post fawned that this new draconian initiative by President Joe Biden’s administration “comes amid a reckoning over the spread of climate disinformation on social media platforms.”

The Post continued: “While Facebook pledged last year to attach ‘informational labels’ to posts about climate change in the United States and other countries, the platform has only labeled about half of posts promoting climate denial.” The story also referred to CCDH simply as a “watchdog group,” and did not point out its leftist bias. The Post and others reported on the event, but it is unconfirmed whether or not it actually took place.

This is exactly the script the CCDH, the White House and the media used last time. The CCDH issued a report in 2021 called the “Disinformation Dozen” calling for people who dared question mainstream narratives on COVID-19 to be banned for pushing what it determined to be “digital misinformation about Covid vaccines.” Political affiliation didn’t matter. Big Tech platforms targeted many who dared to question COVID-19 treatments, masking regulations and more. Even the White House used the CCDH’s report to push for more censorship online. According to a July 16, 2021, CNN report:

The CCDH has now turned its sights on publications that challenge the end-of-the-world climate narratives, and the White House could be setting up the parameters for another censorship campaign in coordination with Facebook and other Big Tech companies.

Climate Depot founder Marc Morano and Junkscience.com founder Steve Milloy lambasted the Biden administration’s elevation of the CCDH propaganda in comments to the MRC. “This is our dystopian world of no deviation allowed from the official party line. If you dare disagree with the conclusions, statements, opinions or policies of those in power, you risk being censored, canceled, deplatfo[rm]ed, defunded, and ostracized,” Morano stated, whose interview with NewsBusters was attacked in CCDH’s “Toxic Ten” report. Milloy, hammering a similar note, said “[t]he left’s agenda is so generally bankrupt of merit that it has been forced to viciously disparage opponents as racists and haters. This tactic, of course, began with climate.” 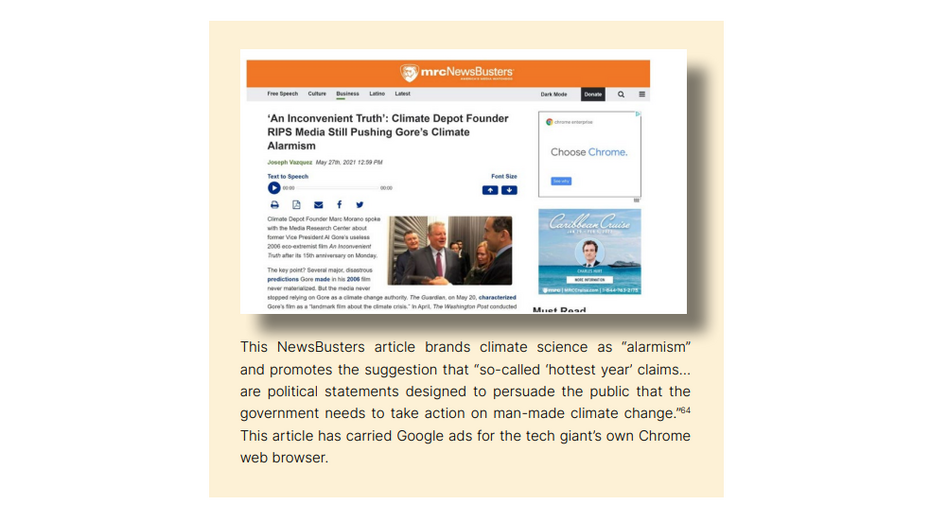 Both Milloy and Morano excoriated the White House agenda to silence speech online that goes against its policy stances and using the leftist CCDH as its north star. “This climate name-calling has now reached the White House which is hosting a summit on combatting ‘climate denial’ (whatever that means). The summit has been coordinated with a dark money outfit ostensibly combatting ‘digital hate’, which has targeted media outlets that publish the views of climate agenda opponents,” Milloy said.

Morano slammed the White House for “trying to criminalize climate change skepticism. And well-funded progressives are more than willing to partner up with the government and Big Tech to enforce their idea of a climate 'consensus.'”

In Milloy’s view, CCDH’s behavior is the death rattle of a dying eco-activist movement: [T]he public should not be fooled,” he said. “The junk science-fueled climate agenda is dying because of its own intellectual and moral bankruptcy. These efforts to disparage and silence opponents are the frantic last gasps of a nasty anti-America and anti-human movement.”

Conservatives are under attack. Contact NPR, The Hill at editor@thehill.com, The Washington Post at (202) 334-6000, Reuters and Forbes at (800) 295-0893 demand they stop promoting an overtly leftist foreign-based organization’s attack on freedom of speech in the U.S.